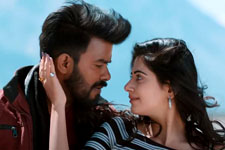 Sai Tulasi Neppali / fullhyd.com
EDITOR RATING
1.0
Performances
Script
Music/Soundtrack
Visuals
3.0
1.0
4.0
4.0
Suggestions
Can watch again
No
Good for kids
No
Good for dates
No
Wait for OTT
No
Have you ever been so tortured by a movie that you involuntarily let out a scream of agony? Today I did. In the two hours I spent watching Gaalodu, I also experienced time dilation (minutes stretched into eternity), body dissociation, and a heightened desire for self-harm. I white-knuckled my way through the insane story, cussing at whoever thought it was a good idea to cast "Sudigaali" Sudhir, with an acting range of approximately one expression, as its lead.

Sudhir plays Raju, a village loafer who spends all his time and money on cigarettes, alcohol and gambling. One day Raju beats up the son of a local MLA during a card game, and accidentally kills him. Fleeing the police, he escapes to the city. There, roaming the Hitech City roads in search of food and water, he runs into Sukla (Gehna Sippy), a wealthy girl who takes an unhealthy liking to him and helps him out.

This rich-girl-poor-boy romance is as old as Cinema itself. But leave it to the Gaalodu writing team to figure out how to take an ancient storyline and make it worse. Sukla feeds Raju and brings him home like he is a stray puppy, and in turn, he saves her from being gang-raped. Now tell me that isn't the most compelling meet-cute you ever heard! I guess it's our fault for expecting a mature love story between a guy who has eyebrow piercings and a girl who sleeps with a teddy bear in her bed.

The rest of the cast seems like a mix of midday Gemini TV serial characters and Jabardasth artists. The resulting slapstick comedy from this cast is as low-brow as you'd expect: transgenders clapping for money, prostitutes suggestively playing with pairs of oranges, and more such. There is a rich beggar character, played by Sapthagiri, whose punchline is that he accepts not only cash but also UPI or debit card (ha-ha!).

The villain in Gaalodu - the MLA whose son Raju kills - is another laughable caricature. In one hand he thumbs a rosary, and in the other he holds the leash of a bloodhound. His split personality probably explains why he can't decide if he wants to forgive Raju or kill him.

The dialogues are as inane as the story. Nobody talks in straight sentences - only poetic one-liners ("lift icchevaadu, hand icchadu") and tongue-twisting monologues. They make PJs like "Sani vaaram puttava? Sani laga thagulukunnav" or "Why do you expect me to change? What am I - a date calendar date that changes every day?". *cue eye rolls*

But forget the story and writing - it's the chaotic screenplay that just blows it out of the water. I have never seen such egregious editing mistakes in a movie before. You'd have to suffer from temporary amnesia for the second half to make any sense in relation to the pre-interval reveal. Before the interval, the police arrest Raju. After the interval, it's as if that scene never even happened, and life goes on.

I wish that I could say Gaalodu is so bad that it's good - you know the kind of movie that is so outrageously ridiculous that it's actually fun to watch with your buddies. But Gaalodu, as you can tell by now, is just plain bad. Sudhir emotes only one expression - of mild surprise and irritation. Gehna Sippy, the heroine, is awkward and dramatic like a teenager in the throes of puberty.

Galoodu had me reaching for the exits faster than Flash. I wanted to rate it nil, but I am giving it a 1 to honor the CGI artists who had to work on all sorts of unnecessary graphics such as adding the backgrounds of Charminar, the Rajiv Gandhi airport and Cyber Towers to show the hero going around Hyderabad. Because, obviously, these things are SO hard to shoot in real life.
Share. Save. Connect.
Tweet
GAALODU SNAPSHOT 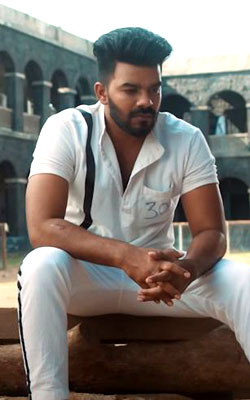 ADVERTISEMENT
This page was tagged for
Gaalodu telugu movie
Gaalodu reviews
release date
Sudheer Anand, Gehna Sippy
theatres list
Follow @fullhyderabad
Follow fullhyd.com on
About Hyderabad
The Hyderabad Community
Improve fullhyd.com
More
Our Other Local Guides
Our other sites
© Copyright 1999-2009 LRR Technologies (Hyderabad), Pvt Ltd. All rights reserved. fullhyd, fullhyderabad, Welcome To The Neighbourhood are trademarks of LRR Technologies (Hyderabad) Pvt Ltd. The textual, graphic, audio and audiovisual material in this site is protected by copyright law. You may not copy, distribute, or use this material except as necessary for your personal, non-commercial use. Any trademarks are the properties of their respective owners. More on Hyderabad, India. Jobs in Hyderabad.