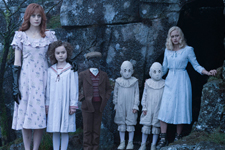 Jaiwantika Dutta-Dhupkar / fullhyd.com
EDITOR RATING
6.0
Performances
Script
Music/Soundtrack
Visuals
6.0
6.0
6.0
6.0
Suggestions
Can watch again
Yes
Good for kids
Yes
Good for dates
Yes
Wait to rent it
Yes
Miss Peregrine's Home For Peculiar Children is childlike in its offering, but it may not really be for children. This is not to say that it's an adult film - far from it - but the plot is convoluted enough to match a film for grownups any day. MPHPC is quite interesting, though, and there isn't a dull moment in this one.

The film is a tell-all about the lives of "peculiar" children - the ones who're unlike the rest and need to have a film made about them. The ones locked up in Miss Peregrine's Home For Peculiar children and confined in a loop to eternal youth. All the peculiars live in Wales, circa 1943. Jake (Asa Butterfield) lives in present-day Florida, year 2016. His closest chums are his old grandfather - who's known to be suffering from dementia - and his own psychiatrist (Allison Janney). His grandfather Abe (Terence Stamp), a war veteran, shares a special relationship with the boy, having brought him up on curious tales of his own childhood among peculiar children who lived in a special home with their headmistress.

The peculiars live in a time loop, because Miss Peregrine (Eva Green) is a "Ymbryne" - she has the power to create a 24-hour time loop and shape-shift into a Peregrine falcon, and protects the children's Home from getting destroyed in WWII air raid. While the outside world thinks the Home was bombed by the Germans during WWII, Miss Peregrine and the peculiars had simply travelled back in time with the help of her special powers.

Abe's sudden and mysterious death leads Jake on a trip to Wales, where the locals lead him to the bombed site. Jake, however, soon discovers the Peculiars, and that he has travelled back in time to 1943 as well. The peculiar children are all quirky in some way or the other - and are confined to eternal youth in the Home and in the time loop under Miss Peregrine's supervision. In the Home, they're protected from the Bad Peculiars, a splinter group that seeks immortality by experimenting on Ymbrynes and devouring human eyes. When the Home is attacked by the Bad Peculiars led by their leader Barron (Samuel Jackson), who later takes Miss Peregrine captive for an experiment, Jake decides to protect the peculiar children and save Miss Peregrine, discovering his own peculiarity in the process.

MPHPC is a nice watch, although it does make you a little giddy with all those twists and turns. At the end of the film, you are left feeling relieved and a little exhausted as well. It has half a dozen children, with rather stereotypical powers, but none of them does anything exemplary. Maybe they're not required to, which is quite alright - MPHPC is not your regular X-Men movie. What a waste, though, you can't help wondering - with a headmistress like that, with superpowers like those, and all that potential.

MPHPC doesn't follow a single track - it meanders here and there, and is finally wrapped up in a hurry with a disappointing climax, with the children settling their scores with the villains in an amusement park. That elicits a few laughs, but nothing beyond that.

Visually, MPHPC makes for good watching - the VFX are nice. The music is great, too. The actors all put in decent performances, especially Judi Dench, Terrence Stamp, Allison Janney, Samuel Jackson, Eva Green and Asa Butterfield. Tim Burton's direction doesn't disappoint. If only the film were a little simpler. 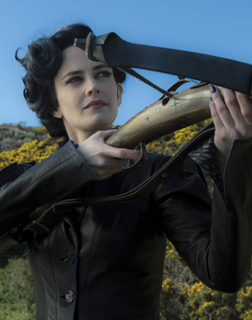 ADVERTISEMENT
This page was tagged for
Miss Peregrine's Home for Peculiar Children english movie
Miss Peregrine's Home for Peculiar Children reviews
release date
Eva Green, Asa Butterfield
theatres list
Follow @fullhyderabad
Follow fullhyd.com on
About Hyderabad
The Hyderabad Community
Improve fullhyd.com
More
Our Other Local Guides
Our other sites
© Copyright 1999-2009 LRR Technologies (Hyderabad), Pvt Ltd. All rights reserved. fullhyd, fullhyderabad, Welcome To The Neighbourhood are trademarks of LRR Technologies (Hyderabad) Pvt Ltd. The textual, graphic, audio and audiovisual material in this site is protected by copyright law. You may not copy, distribute, or use this material except as necessary for your personal, non-commercial use. Any trademarks are the properties of their respective owners. More on Hyderabad, India. Jobs in Hyderabad.