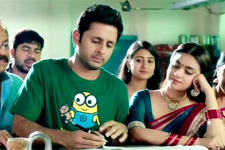 Anil Bandhakavi / fullhyd.com
EDITOR RATING
5.0
Performances
Script
Music/Soundtrack
Visuals
5.0
5.0
5.0
5.0
Suggestions
Can watch again
No
Good for kids
Yes
Good for dates
Yes
Wait to rent it
Yes
Love that starts early might get boring quickly but is probably the most reliable. In fact, what's boring is reliable, and what's reliable, boring. That might be the most crucial takeaway from the film Rang De, a film whose title is quite hard to explain, but probably does not need a good reason, like love. Written by Venky Atluri and P. Sathish Chandra, this is a story that covers the lifelong love saga of Arjun and Anu, that begins in childhood and progresses into the boring and reliable flavour of marital love.

Arjun (Nithiin) is gifted with the girl of his dreams as his birthday wish is fulfilled at the tender age of four, when Anupama, aka Anu (Keerthy Suresh), moves into the neighbouring home. They become friends at once. However, as they grow up, Anu consistently wins the hearts of Arjun's parents who admire her general tendency to make the right choices. Arjun's father always implores Arjun to learn from Anu.

Watching Anu receive all the attention of his parents festers a sense of jealousy in Arjun that eventually turns into an irritable aversion. He does get some solace from Anu's mother who always takes his side. Anu, on the other hand, always continues to love Arjun just as she did on the first day they met as kids. Unbeknownst to all, including Arjun who tends to be a little aloof around her, she wishes to marry Arjun.

After Arjun's graduation, his sister convinces him to move to Dubai for his MBA. Anu plans to follow him but her mother wants her to get married. Arjun, who hopes to be free of Anu's presence in Dubai, attempts to influence the circumstances so that she's quickly married.

Anu plays along with Arjun's plan but traps him in the end by revealing her love for Arjun to everyone on the day of her marriage. Anu's mother is upset with her daughter's behaviour but is quite happy to accept Arjun as a son-in-law. Arjun's father, of course, could not be happier with Anu as his daughter-in-law. The tables have turned on Arjun, who now has to figure out a way with Anu, his very first crush.

Rang De gets stuck somewhere in the process of transitioning from a story about petty relationship fights between college kids into an adult drama about marriage dysfunctions with pregnancy thrown into the mix. Clearly, the story from start to finish is an Arjun-Anu love saga, but at no point does the film ever take the conflicts to a point of invoking suspense. The film is unable to arouse any intense feelings that compel you to take sides, leaving you passively invested in the story.

Nithiin hardly manages to bring out any strong and precise attributes in Arjun's character, but neither does the story. The same is the situation with Keerthy Naresh and her depiction of Anu. Vennela Kishore is force-fitted into the story, to add comedic flavour and relief, with humour that is worthy of occasional smirks. Performances can hardly do justice to a script whose drama is very mild on the edges.

The film plays a little on the discrepancy in the emotional response of a man and a woman to the process of pregnancy, and subtly admonishes us against looking at the ordeal as just the aftermath of sex. Around this idea is where the turning point of the film is constructed, but potency is absent in the execution.

A colourful brightness is constantly maintained in the visuals which goes along with the theme of the title. While the constancy is commendable, the contrast between the bright visuals and the darker situations presented in the second half confuses the message and deters you from the path of the story. An exaggerating example of this would be attempting to induce the fear of a ghost lurking around in the openness of a tropical island on a sunny day.

Musically, the tunes are pleasing but nothing unfamiliar.

Rand De comes off as though everyone in the crew is on a different wavelength. The film starts off with Arjun and Anu as toddlers and goes into the conflicts and dilemmas faced by adults in marriage while attempting to maintain the same feel throughout. You would expect a dynamic and continuous shift in perspective to keep someone hooked on such a tale. Overall, the juice lacks the punch.
Share. Save. Connect.
Tweet
RANG DE (TELUGU) SNAPSHOT 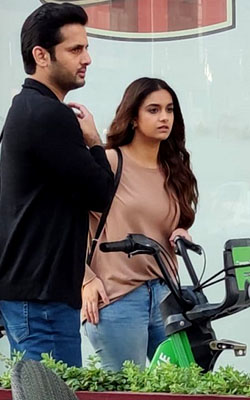 ADVERTISEMENT
This page was tagged for
Rang De (Telugu) telugu movie
Rang De (Telugu) reviews
release date
Nithiin, Keerthy Suresh
theatres list
Follow @fullhyderabad
Follow fullhyd.com on
About Hyderabad
The Hyderabad Community
Improve fullhyd.com
More
Our Other Local Guides
Our other sites
© Copyright 1999-2009 LRR Technologies (Hyderabad), Pvt Ltd. All rights reserved. fullhyd, fullhyderabad, Welcome To The Neighbourhood are trademarks of LRR Technologies (Hyderabad) Pvt Ltd. The textual, graphic, audio and audiovisual material in this site is protected by copyright law. You may not copy, distribute, or use this material except as necessary for your personal, non-commercial use. Any trademarks are the properties of their respective owners. More on Hyderabad, India. Jobs in Hyderabad.