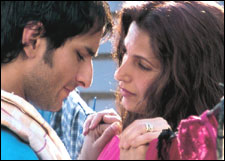 Set in a Mumbaiyya Parsi community, Being Cyrus is 100% kosher, and comes with a superb background score and a voice-over that tells the tale with acerbic wit. The plot itself is dark, and divorced forthrightly from the Bollywood’s ubiquitous frills and flounces of morality. It peels off with excruciating precision like the layers of an onion, and begins and ends with abrupt beauty. A refreshing change from the increasingly iridescent masala movie genre.

The film begins with Cyrus (Saif Ali Khan) moving in as an apprentice and helper in the pottery workshop of a retired, cloudy-headed artist Dinshaw Sethna (Naseeruddin Shah). Sethna's wife Katy (Dimple Kapadia) is a billowing, voluptuous woman with an almost demoniac sexual appetite. She trails Cyrus like a persistent streetwalker while Cyrus talks to himself about how the family dynamics seem like the salvage of a train wreck.

The Sethna family begins at the shrunken and shriveled Fardoonjee Sethna (Honey Chaya). He is ill-treated like a beast of burden with great enthusiasm by his son Farookh (Boman Irani) and his non-interfering, wispy little wife Tina (Simone Singh) who looks as fragile and intimidated as an elf hiding in the rushes watching an ogre on a rampage.

Katy puts Cyrus on an errand-running spree, sending little gifts and chocolates to her ailing father-in-law behind the back of Farookh. Meanwhile she is having a rather sleazy affair with Farookh himself.

Characters are looking at each other curiously, as if trying to discover their schizophrenic alter egos, with suspicion and wariness, as if everyone around has something to hide, some blood-stained sickle in the wraps of their clothes, some dirty ploy to undermine the other.

The camera movements and angles are bizarre, while unintelligible flashbacks and dingy, funereal visions abound, all the while giving the impression that there is some sinister back-story that leads up to this point. The sinisterness slowly begins to spread to all characters one by one, like a Nimbus cloud casting slowly over a city sky.

By the second half of this short movie (1-1/2 hours long), Being Cyrus has completely shifted gears. It is no more slow and contemplative, and it seems almost a betrayal how the flick changes character from a drama to a bonafide thriller. From here on, you must watch, because reviews don’t tread into this spoiler territory.

The acting by everyone is pretty neat, but Saif Ali Khan is clearly the king here, and one gets the distinct impression that he has finally gotten the role that completely utilizes his potential. He is a natural, uttering his dialogues with an unstudied air that simply makes it all the more convincing.

Boman Irani, Simone Singh and Honey Chaya are pretty smooth too, and for any inadequacies anywhere, the avant garde script simply fills in. Salim-Suleiman’s score is brilliantly cocky, chalking its own course even as it is just a background. Together the music and scenes form a complex blend, introducing new psychological stimulants to keep your mind completely busy.

You can’t miss this film, but remember to hang on to every word, because by the time the denouement arrives, it is easy to lose several threads, and then you are left with a very dissatisfying half-completed pattern. That is the biggest shortcoming of Being Cyrus.

In his artistic fervor, and probably love for the abstract, Homi Adjania packs in too much in too little. Putting two and two together can be pretty tough, especially if the problem is given to you encrypted. If you are one of the handful who is able to crack the ending twist in real-time, you will probably be among the chosen few who will swear lifelong by Being Cyrus.

Others will leave with quizzical expressions, having clueless "who, what and where" debates. Either way, Being Cyrus is a sure-shot winner, and deserves every bit of the unprecedented acclaim it is getting.
Share. Save. Connect.
Tweet
BEING CYRUS SNAPSHOT

ADVERTISEMENT
This page was tagged for
Being Cyrus english movie
Being Cyrus reviews
release date
Saif Ali Khan, Naseruddin Shah
theatres list
Follow @fullhyderabad
Follow fullhyd.com on
About Hyderabad
The Hyderabad Community
Improve fullhyd.com
More
Our Other Local Guides
Our other sites
© Copyright 1999-2009 LRR Technologies (Hyderabad), Pvt Ltd. All rights reserved. fullhyd, fullhyderabad, Welcome To The Neighbourhood are trademarks of LRR Technologies (Hyderabad) Pvt Ltd. The textual, graphic, audio and audiovisual material in this site is protected by copyright law. You may not copy, distribute, or use this material except as necessary for your personal, non-commercial use. Any trademarks are the properties of their respective owners. More on Hyderabad, India. Jobs in Hyderabad.