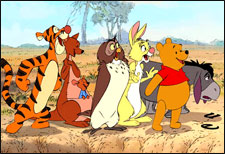 Nupur Barua / fullhyd.com
EDITOR RATING
7.5
Performances
Script
Music/Soundtrack
Visuals
8.0
6.0
7.0
8.0
Suggestions
Can watch again
Yes
Good for kids
Yes
Good for dates
No
Wait for OTT
No
At last, a movie that is short and sweet! At 69 minutes long, Winnie The Pooh is not the first feature film on the lovable stuffed bear, but it is the most original. And the best part of the movie is not the movie itself, but a short film titled The Ballad Of Nessie (about the Loch Ness monster and her friend McQuack) that plays just before the main flick.

Winnie (Jim Cummings) the Pooh, also known as simply Pooh, has a very important thing to do, the narrator (John Cleese) tells us. Eeyore (Bud Luckey) has lost his tail, and all of Christopher Robin's (Jack Boutler) friends from his little world of select toys must get together and try to solve the mystery.

Pooh is always hungry - that is a given - and his stomach first meows and then roars in hunger from the minute he wakes up. Every time he almost gets a pot of honey/hunny/huny to appease his angry stomach, something else comes up, and he has to sacrifice the sweet sticky substance for the greater good of his friends.

Pooh's stomach has a character of its own, and is his best friend, apart from Piglet (Travis Oates). The Tummy Song is dedicated to Pooh's stomach alone. These and other similar unexpected moments can catch you off-guard and leave a smile on your face, even as you try to avoid being hit by the restless kids in the theatre.

In the meantime, the all-knowing Owl (Craig Ferguson) misinterprets a letter and scares the bejesus out of the gang by conjuring up an imaginary monster, Backson (Huell Howser). Rabbit (Tom Kenny) devises a plan to trap Backson, and the furry friends prepare the bait, singing and dancing as they do so.

The voice actors are professional actors who love their job, as is obvious from the intonations and inflections in the dialogue delivery. An element of surprise is actor Zooey Deschanel's presence as a playback singer - she sings 3 songs in the movie, and the end-credit song, too.

There are about 18 pieces of music in the film, and each one helps progress the story further, while also giving one an insight to the different characters.

The characters remain true to E H Shephard's original sketches, and the story is a collective adaptation of all 3 Winnie The Pooh books.

The animation is 2D, with most transitions taking place on the pages of the books by A A Milne. In an attempt to be more contemporary, the characters interact with the letters on the pages, and use them as props.

The adventures of Pooh and his friends on the big screen are best suited for viewers under the age of 7. However, given the film's length, or the lack of it, parents and other adults will probably not fret with impatience either.

Short, sweet, nostalgic, quirky and fun (for kids), Winnie The Pooh is a must-watch. To introduce your child to the character, however, you will need to begin with the books. Till then, you may just want to revisit your own childhood.
Share. Save. Connect.
Tweet
WINNIE THE POOH SNAPSHOT

ADVERTISEMENT
This page was tagged for
Winnie The Pooh english movie
Winnie The Pooh reviews
release date
Jim Cummings, Tom Kenny
theatres list
Follow @fullhyderabad
Follow fullhyd.com on
About Hyderabad
The Hyderabad Community
Improve fullhyd.com
More
Our Other Local Guides
Our other sites
© Copyright 1999-2009 LRR Technologies (Hyderabad), Pvt Ltd. All rights reserved. fullhyd, fullhyderabad, Welcome To The Neighbourhood are trademarks of LRR Technologies (Hyderabad) Pvt Ltd. The textual, graphic, audio and audiovisual material in this site is protected by copyright law. You may not copy, distribute, or use this material except as necessary for your personal, non-commercial use. Any trademarks are the properties of their respective owners. More on Hyderabad, India. Jobs in Hyderabad.