Not A Love Story Review 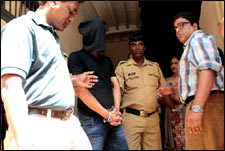 Nupur Barua / fullhyd.com
EDITOR RATING
6.0
Performances
Script
Music/Soundtrack
Visuals
6.0
7.0
5.0
4.0
Suggestions
Can watch again
No
Good for kids
No
Good for dates
No
Wait for OTT
Yes
In his blog, Ram Gopal Varma states that the Neeraj Grover incident - of a couple killing and disposing of the body of a television executive - shook him to his core. This inspired his latest offering, Not A Love Story, based on the events that led to one of the most controversial cases this country has ever seen.

Anusha Chawla (Mahie Gill) is an aspiring actor from Chandigarh. She convinces her obsessive boyfriend, Robin Fernandes (Deepak Dobriyal), to let her try her luck in Mumbai. He reluctantly lets her go, but his insecurities and frustrations increase as she fails to make it big, and does not seem too willing to return to him either.

Anusha refuses to choose the easy way out (read: give in to casting couch pressures), and is ever-optimistic that her big chance is just around the corner. Finally, a young film executive, Ashish Bhatnagar (Ajay Gehi), obviously smitten by the fame-hungry Anusha, manages to get her a role in a movie. The rest, especially true in this case, is (recent) history, or at least motivated by it.

We all know the story, so there are no surprises there. What is sure to take your breath away, however, is Ramu's series of bizarre camera angles. Shot entirely with Canon 5D Mark II DSLRs, you will see shots that you have never seen before, and tax your mind identifying the objects in the frame. The DSLRs also seem to have a strange affinity to Mahie Gill's bosom.

5Ds may be the next best thing in filmmaking, and lighting a scene may be redundant when you use one of them, but what RGV should have remembered is that a 5D is also an unforgiving camera. It enhances every flaw (skin, colour, production design, texture, everything), and such realistic magnification is not for the faint-hearted.

And then there is the music. Now that Sandeep Chowta and RGV have kissed and made up, they impose on you loud and harsh compositions throughout the flick. The music overrides, in certain sequences, the dialogues, the actions and the plot altogether. The Rangeela title track is overdone, especially as a ringtone. RGV also makes Mahie Gill dance to it, suddenly, in the middle of all that angst.

Deepak Dobriyal is the obvious choice to play a fanatical lover, and he does justice to his role. So does Mahie Gill, as the wannabe starlet. Both are consistent in their delivery, and both have a similar range of expressions to depict similar emotions.

One wonders whether Mahie had a problem with the camera poking around under her skirt, because she goes about her business despite the intrusion. Zakir Hussain as the cop with a huge mole on his cheek (ala Enrique Iglesias, but nowhere as hot as him) is perfect - he is indifferent and professional, and has no qualms fluctuating between polite cop and abusive cop.

In fact, the end of the movie is not as gripping, in terms of story, as the beginning. The characters are not likeable, and one cannot empathise with Anusha's vulnerability. And then, just like that, the end sequence reminds you of the RGV of yore, albeit a little more melodramatic.

The production design, in keeping with the shot taking, is bare and without frills. Anusha's apartment has a goldfish in a bowl (wonder what happened to it when she was arrested), no furniture, and posters of various heroines (including one of Meenakshi Seshadri). Most of the action takes place here, and it is to Ramu's credit that he managed to shoot in the same building where the original incident occurred - it lends to the authenticity.

RGV's master-stroke was introducing the promos of the film on the same day that Maria Susairaj was released from prison. Both Emile Jerome and Maria have voiced their reservations about the movie, and the former had also asked for a stay on its release.

If you can digest, visually, blood, gore, violent sex, and constant shaky camera movement, then catch Not A Love Story before Jerome gets his way.
Share. Save. Connect.
Tweet
NOT A LOVE STORY SNAPSHOT

ADVERTISEMENT
This page was tagged for
Not A Love Story hindi movie
Not A Love Story reviews
release date
Mahie Gill, Deepak Dobriyal
theatres list
Follow @fullhyderabad
Follow fullhyd.com on
About Hyderabad
The Hyderabad Community
Improve fullhyd.com
More
Our Other Local Guides
Our other sites
© Copyright 1999-2009 LRR Technologies (Hyderabad), Pvt Ltd. All rights reserved. fullhyd, fullhyderabad, Welcome To The Neighbourhood are trademarks of LRR Technologies (Hyderabad) Pvt Ltd. The textual, graphic, audio and audiovisual material in this site is protected by copyright law. You may not copy, distribute, or use this material except as necessary for your personal, non-commercial use. Any trademarks are the properties of their respective owners. More on Hyderabad, India. Jobs in Hyderabad.