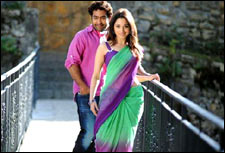 Deepa Garimella / fullhyd.com
EDITOR RATING
5.0
Performances
Script
Music/Soundtrack
Visuals
7.0
5.0
7.0
7.5
Suggestions
Can watch again
No
Good for kids
No
Good for dates
No
Wait to rent it
Yes
An NTR (they don't call him 'Jr.' any more) film is increasingly taking on the feel of a neighbourhood tamasha, a side show. Predictability and monotony are no longer disguised (in the garb of commercial appeal) any more - no one's even being apologetic about making a film with the same faces and the same things happening, over and over again.

Oosaravelli, a tiresomely enthusiastic rehash of every Telugu movie you have seen, is a project that seems to serve no significant purpose other than having created jobs for a battalion of people. Little wonder, then, that there was no pre-release noise about it - there's nothing in here to hype.

So what do we have here? The regulars. Hero (NTR). Heroine (Tamannah). Bespectacled friend (Payal Ghosh) of heroine. Don. Sub-don. Super-don. Evil policeman. Comic "relief". Flashback. And in the end, not a whimper of an apology.

In all, it's like being force-fed when you're full.

The one thing that the film has going for it is the flashback towards the end, in which Tamannah has a huge role to play. She is flawless as a performer, but this bit comes too little too late in the flick.

Fans of Jr. NTR (oh, and by the way, there is not a single mention of NTR or "the clan" in the entire movie - now that's a feat) might be insistent on not missing this movie, but that's about it. The clichéd plot, the absence of solid comedy, and the gory violence make this unattractive to almost everyone else.

NTR Junior is a bankable actor, and he's clearly more versatile than his current work gives him opportunity for, but his films do not seem to have the spark in them any more. He, on his part, doesn't look like he's doing all that he's capable of - dances, fights and a "mass" dialogue or two are hardly the ultimate that someone of his talent ought to aspire for.

As for Tamannah, she's beautiful, expressive, makes the right dance moves, and despite her non-local complexion and looks, has certainly come of age as a Telugu heroine. Definitely destined for bigger things (and by that, we do not mean Bollywood), this one.

Prakash Raj looks as bored as he is boring. Jayaprakash Reddy, Raghu Babu and gang mildly tickle you with some limp humour, and succeed in bits. Payal Ghosh has bad lip sync, despite being given a plum role.

One or two of Devi Sri Prasad's tunes have some zing to them and are drawing in the cheers. The cinematography is quite brilliant, and the much talked about fights have indeed been composed well.

Not the film you'd take your family to this Dussehra, and neither the kind you'll remember next Dussehra. Till then, you're forgiven if you amble in if you didn't get tickets to anything else.
Share. Save. Connect.
Tweet
OOSARAVELLI SNAPSHOT

This has a better story and performances than Dookudu !!

Can definitely watch once.. :-)


Pros: Story, Twists, NTR
Cons: Too much fights... and violence
3
0
USER RATING
7.0
OOSARAVELLI USER REVIEWS
1 - 6 OF 6 COMMENTS
POSITIVE  |  NEGATIVE |  NEWEST  |  OLDEST  |  MOST HELPFUL  |  LEAST HELPFUL
USER RATING
6.2
10 USERS
Performances
Script
Music/Soundtrack
Visuals
7.0
6.1
6.1
6.7
Can watch again - No
Good for kids - No
Good for dates - Yes
Wait to rent it - No
Movie Lover...! on 17th Oct 2011, 11:23am | Permalink
Movie is excellent, technically strong like a Hollywood movie. Fullhyd review is not correct & it is proved with recent collections and attracted by family audience. This time also it is proved that fullhyd's review is wrong, If u hav guts, prove that your review is correct.
Movie Lover on 13th Oct 2011, 3:07pm | Permalink
I liked this more than Dookudu!!! I dont know why Dookudu is more hyped up!!!

This has a better story and performances than Dookudu !!

Can definitely watch once.. :-)


Pros: Story, Twists, NTR
Cons: Too much fights... and violence
RATING
7
Sujani on 11th Oct 2011, 6:14pm | Permalink
Cool movie! Comedy worked for me - way better than Dukudu. The girl was alright and NTR had a rough and tough charm on him - i liked that a lot.


Pros: NTR, story, costumes(!)
Cons: Music, tto much violence at the end
RATING
7
sekhar on 10th Oct 2011, 1:58am | Permalink
One time Watch.
RATING
6
mr.vbharath on 8th Oct 2011, 2:47am | Permalink
Good Movie
anon_critic on 6th Oct 2011, 11:32pm | Permalink
Movie is not as bad as it is being made out in most of the sites including here. We all knew this will not be a maniratnam or k.viswanath type of movie. This has surendar reddy's stamp and NTR did his role very well. Yes, the comedy didnt work, but the second half was interesting almost till the end. It is a decent movie, definitely can be watched once, and is certainly better than most of the dubbed movies or the bollywood movies.

ADVERTISEMENT
This page was tagged for
oosaravelli telugu movie
Oosaravelli telugu movie
Oosaravelli reviews
release date
Jr. NTR, Tamanna
Follow @fullhyderabad
Follow fullhyd.com on
About Hyderabad
The Hyderabad Community
Improve fullhyd.com
More
Our Other Local Guides
Our other sites
© Copyright 1999-2009 LRR Technologies (Hyderabad), Pvt Ltd. All rights reserved. fullhyd, fullhyderabad, Welcome To The Neighbourhood are trademarks of LRR Technologies (Hyderabad) Pvt Ltd. The textual, graphic, audio and audiovisual material in this site is protected by copyright law. You may not copy, distribute, or use this material except as necessary for your personal, non-commercial use. Any trademarks are the properties of their respective owners. More on Hyderabad, India. Jobs in Hyderabad.