Into The Storm (Hindi) Review

Nupur Barua / fullhyd.com
EDITOR RATING
4.0
Performances
Script
Music/Soundtrack
Visuals
5.0
4.0
4.0
7.0
Suggestions
Can watch again
No
Good for kids
No
Good for dates
No
Wait for OTT
No
In a found footage film, which is what Into The Storm is, you can be pretty certain of a few plot outcomes: (i) a lot of people will die, (ii) most of the camera work will be shaky, and (iii) the protagonist will usually be the guy behind the camera. Popular with horror movies, the genre has now moved on to other categories such as this one - a disaster movie - adding a spine-chilling dimension to otherwise rather staid, and staged, plot points.

A found footage film about a tornado - that must be a first. Tornadoes are fascinating topics - remember Twister? Only, in this particular movie, the emotional quotient comes from a bunch of youngsters, as does the maturity, while the older ones make mistake after mistake.

To begin at the beginning, it is graduation season at the Silverton High School. Gary Morris (Richard Armitage) is the Vice Principal, and he has given his two sons the responsibility of filming the event so that it can be put in a time capsule to be opened after 25 years. The air is palpable with excitement.

Unknown to these youngsters, about to step in adulthood, a tornado is on its way. And chasing it is the never-say-die storm chaser, Pete (Matt Walsh). He has an armoured vehicle, lovingly nicknamed Titus, as his chariot. Pete and his team of scientists and researchers head to Silverton in pursuit of a possible tornado.

When they reach the small town, the weather is deceptively calm, and Pete's team is disappointed. However, in the middle of the graduation ceremony, the climate changes, and the tornado strikes. The graduation attendees are pushed into the school building and wait it out.

Once the tornado goes away, everybody comes out to take stock of what has happened. Morris decides to look for his eldest son, who is stuck in a paper mill somewhere out of town. Pete reluctantly agrees to help, but just when they are about to embark on their rescue mission, a fresh tornado strikes. Suddenly, life in the small town becomes dangerous for all - tornado chasers, normal citizens, and the boys stuck in the paper mill.

The unpredictable tornado is given a character of its own in this movie. It is malicious and dangerous. It is the real villain of the film, but since it is a part of nature, human beings need to be smarter than ever to defeat it. While this is a fascinating thought, making Pete the rakish hero with a heart of gold, so to speak, seems a little far-fetched.

Killing off children and the good guys is not something a typical Hollywood movie would allow. The screenplay sticks to the tried and tested, and plays it safe when it comes to putting the characters at too much risk. And since you already know that the good guys will win against nature, there is not much to look forward to - no surprises, no twists. The stakes increase at regular intervals, but the script lacks thrill.

At some point, the makers make a rather weak effort to remind us that we need to appreciate whatever little time we have left on this planet. Most of the peripheral characters are suddenly awakened to a new life, literally. Sacrifices are made, with the usual bravado and dialogues, but there is nothing new here for veterans of thrillers and disaster movies.

The found footage genre does not depend too heavily on deliberate production design and costume, thus ensuring some sort of authenticity in the visuals. The visual effects, on the other hand, while stunning, are also surreal, and somehow seem out of place in this setting. The contrast between what is real and what is exaggerated may lead to confusion. The camera work and editing are both choppy, but that is expected in a film shot in this particular style.

Richard Armitage and Matt Walsh ham quite a bit, for a movie that is supposed to look like a documentary. Otherwise, they are the only ones effective in their roles. The others look like they are trying too hard to be natural. Sarah Wayne Callies is decent, though.

There is not much that one can say about a movie like Into The Storm. The title gives away the plot, and the script does not give you goosebumps. At best, it looks like a B-grade effort at a disaster movie, and is easily avoidable.
Share. Save. Connect.
Tweet
INTO THE STORM (HINDI) SNAPSHOT 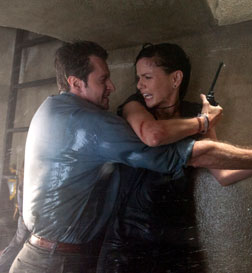 ADVERTISEMENT
This page was tagged for
into the storm hindi
Free watch into the Strom in hindi
into the storm in hindi
hollywood movie into the storm hindi
Into The Storm (Hindi) hindi movie
Follow @fullhyderabad
Follow fullhyd.com on
About Hyderabad
The Hyderabad Community
Improve fullhyd.com
More
Our Other Local Guides
Our other sites
© Copyright 1999-2009 LRR Technologies (Hyderabad), Pvt Ltd. All rights reserved. fullhyd, fullhyderabad, Welcome To The Neighbourhood are trademarks of LRR Technologies (Hyderabad) Pvt Ltd. The textual, graphic, audio and audiovisual material in this site is protected by copyright law. You may not copy, distribute, or use this material except as necessary for your personal, non-commercial use. Any trademarks are the properties of their respective owners. More on Hyderabad, India. Jobs in Hyderabad.