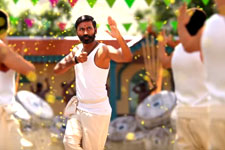 Chaitanya Karthik / fullhyd.com
EDITOR RATING
6.0
Performances
Script
Music/Soundtrack
Visuals
7.0
4.0
7.0
6.0
Suggestions
Can watch again
No
Good for kids
No
Good for dates
No
Wait for OTT
No
Of course, there are movies that resort to a template, and despite the lack of any novelty in the plot, manage to woo the audiences. A case in point would be Dhanush's own Asuran, which was brilliantly made despite having a far too familiar plot. However, it isn't the same with Pattas, dubbed in Telugu as Local Boy.

So Shakti (Dhanush) is a thief, because when you are separated from your parents, that is the only career choice you have. He and his friend (Sathish) have made a living out of robberies, when one day they meet Sadhana (Mehreen) who works in a martial arts school run by Neelakantham (Naveen Chandra). Things get sticky between Shakti and Neelakantham, and it is at this point that Kanyakumari (Sneha) comes out of jail, after serving 16 years for murder.

She carries a bag with her and Shakti steals it, but something stops him from running away with the money. He sees his name "Shakti" tattooed on her arm, and although his friend says that he is not the only Shakti in the world, he still thinks that there is some connection there.

The bag also has a photo of the family of three, when Shakti was still a kid, and his friend then shuts up. Meanwhile, Kanyakumari wants to exact revenge on Neelakantham, but her plan gets botched and the latter's goons start assaulting her. Enter Shakti, and there we have our interval bang.

The second half is basically the story of Vijayendra Bhupathi (Dhanush), who is a specialist in Adimurai, a seemingly lost form of martial arts. Neelakantham is the son of Vijayendra's master (Nassar), and he's jealous of Vijayendra. One thing leads to the other and Neelakantham kills Vijayendra. The rest of the story is about how Shakti avenges his father's death - and wait, he also becomes an MMA champ.

It's not that Local Boy is bad. Maybe had it released ten years ago it would've made for an exciting watch, but in 2020 it is clearly anachronistic. Apart from Adimurai, there isn't anything new in this overdone template. There are no twists and turns, and not even any tweaking of a plot that the audience has had enough of. The result is a movie that is predictable every step of the way and fails to keep you invested.

Also, in the second half, we see Shakti winning MMA matches one after the other, and that is a bit too much to bear. I don't know how saying "I have my dad's blood" makes a person better than most other contenders who've spent years training.

Dhanush oozes swag when he's being Shakti, but it is in the role of Vijayendra Bhupathi that the performer we've come to admire is on full display. He's great in the action scenes, and is it just me or does he look like Bruce Lee from certain camera angles? He is a natural when it comes to fights, and this movie is no different.

Mehreen plays a character that vacillates between the hero and the villain, and though she is decent, her role could have been explored further. Naveen Chandra is great as Neelakantham, and makes you hate him with all your heart. Hopefully he gets more roles where he can really shine. Nasser and Sneha do what they usually do - justice to their roles.

The songs are fine, but it is the background score that is really good, and helps the movie a lot. The cinematography is decent, and the flashback episode has been captured really well. The rest of the the movie would just get filed under "not bad".

You can happily skip Local Boy unless you've been living under a rock for the last three decades, or for some reason you totally love dubbed movies.
Share. Save. Connect.
Tweet
LOCAL BOY SNAPSHOT 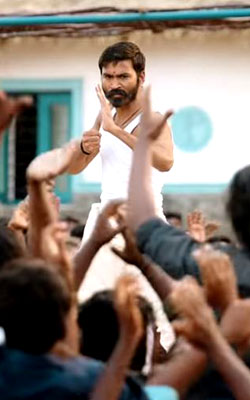 ADVERTISEMENT
This page was tagged for
local boy movie villan
local boy movie review
local boy telugu movie reviews
Local Boy telugu movie
Local Boy reviews
Follow @fullhyderabad
Follow fullhyd.com on
About Hyderabad
The Hyderabad Community
Improve fullhyd.com
More
Our Other Local Guides
Our other sites
© Copyright 1999-2009 LRR Technologies (Hyderabad), Pvt Ltd. All rights reserved. fullhyd, fullhyderabad, Welcome To The Neighbourhood are trademarks of LRR Technologies (Hyderabad) Pvt Ltd. The textual, graphic, audio and audiovisual material in this site is protected by copyright law. You may not copy, distribute, or use this material except as necessary for your personal, non-commercial use. Any trademarks are the properties of their respective owners. More on Hyderabad, India. Jobs in Hyderabad.