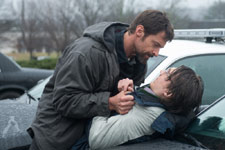 Neha Mathur / fullhyd.com
EDITOR RATING
7.5
Performances
Script
Music/Soundtrack
Visuals
8.0
6.5
7.0
8.0
Suggestions
Can watch again
Yes
Good for kids
No
Good for dates
No
Wait for OTT
No
"What would you have done?" is the lurking question that Prisoners quietly demands of you. It hits close to home, building a tense human drama that sinks into your gut with heavy dread. The film parks you at the precipice of moral ambiguity, and leaves you wondering how steep a fall you would take in order to recover a loved one.

In the film, a routine Thanksgiving dinner, replete with warm chatter and good friends, turns into a hysterical nightmare for two suburban families, the Dovers and the Birches, as their young daughters, Anna Dover and Joy Birch, disappear mysteriously from their front street.

In walks Detective Loki (Jake Gyllenhaal), a reticent officer who has no unsolved cases to his name and vows to find the two missing girls. The fathers, Keller Dover (Hugh Jackman) and Franklin Birch (Terrence Howard), assist the police in their search, even as the distraught mothers Grace Dover (Maria Bello) and Nancy Birch (Viola Davis) suffer the long wait.

But, it does not take long for paternal-head Keller's impatience to surface and strike hard. Disillusioned with the official investigation when suspect Alex Jones (Paul Dano), a cognitively- disabled young man, is let go on the basis of lack of evidence, Keller takes things in his own hands.

It is here that the central plot is set in motion. The overarching narrative revolves around the conflict that is drawn up between personal authority and state authority - that of the missing child's father and that of the official detective. The personal, goaded by rage and helplessness, comes to stand for irrational violence, especially when time is running out. Even as Prisoners opens up a conversation about justice and collateral damage, it blurs the lines as victim turns perpetrator and suspect turns victim.

A loving patriarch and believer, Keller is a poster boy for Middle America. He is not afraid to extract the truth through his own means of torture. He is not afraid to demonize himself. There is a poignant scene where his frantic wife, Grace, reminds Keller of his role as male protector of the family. Of course, all retributive justice comes at a price; the film is quick to remind us.

Hugh Jackman as the frenzied father gives a heart-rending performance. His desperation speaks most clearly to the audience, and viewers are sure to identify with his anguish, if not his methods.

Terrence Howard, as the other father, acts as a foil to Jackman's fuming character. He is soft, even resigned, only hoping for the best.

As the film progresses, we realize that this is a character-driven narrative. We are introduced to a world of odd characters with seemingly dangerous habits, but nothing is as it seems. The suspense will keep you riveted as each false trail leads to new discoveries. Here, a false trail is never just that; on the contrary, it changes the very course of people's lives. Every action has a repercussion.

But nothing renders the endemic doom as acutely as cinematographer Roger Deakins's bleak frames. He makes effective use of the weather, a ruthless winter, to create a sense of wretchedness. Barren roads and bald trees, as much as the cluttered interiors of a neglected home, become a grim reminder of the sorrow of the families.

Though the film is slow-paced, it never turns tedious. Sometimes happenstance overtakes the script, but not in any way that is detrimental to the overall movie. Writer Aaron Guzikowski weaves an engaging screenplay that, sometimes, smacks of thriller clich?s, but the intense performances will leave the viewer with an unshakeable "this could happen to me" vibe.

A major flaw in the film is the under-utilization of ace actors Maria Bello and Viola Davis. They are hardly present on screen, though when they are, it is compelling. Paul Dano and Melissa Leo, as a duo of an inverted Spiderman-inspired, benign aunt and a wonder boy, are spot on.

This is a dark world, with flashes of gore, heartbroken parents, and a bare and rundown suburbia. But, it is also a tale of unexpected twists and deepening suspense. Either way, Prisoners will surely leave you disturbed.
Share. Save. Connect.
Tweet
PRISONERS SNAPSHOT 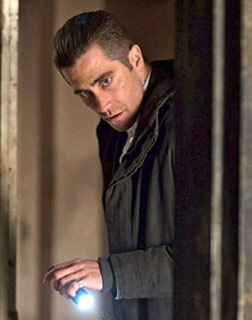 ADVERTISEMENT
This page was tagged for
Prisoners english movie
Prisoners reviews
release date
Hugh Jackman, Jake Gyllenhaal
theatres list
Follow @fullhyderabad
Follow fullhyd.com on
About Hyderabad
The Hyderabad Community
Improve fullhyd.com
More
Our Other Local Guides
Our other sites
© Copyright 1999-2009 LRR Technologies (Hyderabad), Pvt Ltd. All rights reserved. fullhyd, fullhyderabad, Welcome To The Neighbourhood are trademarks of LRR Technologies (Hyderabad) Pvt Ltd. The textual, graphic, audio and audiovisual material in this site is protected by copyright law. You may not copy, distribute, or use this material except as necessary for your personal, non-commercial use. Any trademarks are the properties of their respective owners. More on Hyderabad, India. Jobs in Hyderabad.