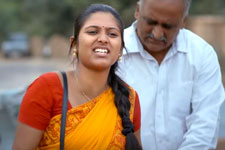 Swaroop Thotada / fullhyd.com
EDITOR RATING
9.0
Performances
Script
Music/Soundtrack
Visuals
8.0
8.0
7.5
7.5
Suggestions
Can watch again
Yes
Good for kids
Yes
Good for dates
Yes
Wait for OTT
No
Care Of Kancharapalem is an absolute delight, even if you don't believe in absolutes. It might sound like an exaggeration, but the film deserves all the superlatives to be heaped upon it. This is the movie we have been awaiting a long time without even being aware that we were. It is honest, clever, genuine, humane, original, socially-conscious, philosophical and path-breaking all the while managing to be highly entertaining. You need to hear more to book your tickets? Alright.

Raju garu (Subba Rao) is an attender in a government office, and he is content with being treated as a second-class citizen by his classist superiors. In fact he is okay with a multitude of ill-treatments life throws at him which he can take with a smile and move on, but it gets on his nerves when people are concerned about his marriage. But they aren't completely unreasonable either, for he is 49. This is a very real Telugu village where people poke their noses into each others' lives, to the point where Raju is called to a "panchayat" over the issue where the elders pass an ultimatum that he should either get married or face the risk of being banished from the village. This might sound harsh in writing but looks almost reasonable in the film, thanks to the humour and innocence it is all imbued with.

Enter Radha (Radha Bessey), a widower from Orissa who gets transferred to Kancharapalem office. She is an even gentler soul than Raju, but is yet a very mature individual, and doesn't tolerate the discrimination Raju is subjected to. Their love story somehow manages to stay exciting, without any cinematic ingredients that concoct excitement. For their love towards each other is organically developed, based on understanding rather than fleetings impulse of feeling. Like how Raju explains later to a skeptical Aditi (Radha's daughter), they are too old to look for anything other than warm companionship. The director subtly employs, rather than flaunts, his deep understanding of humanity.

We are simultaneously introduced to many characters in the village, most of which are played by Kancharapalem inhabitants who aren't professional actors. We meet this Brahmin girl Bhargavi (Praneetha Patnaik), a very individualistic woman of strength and bravery that warms up to a very quick-tempered Joseph (Karthik Ratnam) whose daily routine involves a fight or two on the streets. And then there is the fawning Geddam (Mohan Bhagath) who is head over heels in love with Saleema (Praveena Paruchuri). The highlight is the sweet love story between Sundaram (Kesava Karri) and Sunitha (Nithya Sree) that is nothing short of pure magic.

The characters are as human as they can get in a movie, and are not forced by any plot conveniences to go astray. Slice-of-life dramas like these face a very real risk of infecting their characters with moral binaries for the sake of easier demonstrability of their messages (Sekhar Kammula's Life Is Beautiful), but thankfully Care Of Kancharapalem stays immune to that through well-etched characters and the filmmaker's understanding of humanity that transcends the belief in good and evil. This is evident from how Aditi's initial reaction is a screech when she learns of her mother's intention to marry at an age of 42, but how she subdues herself to reason once Radha points to her hypocrisy asking "Where is your feminism now?". This beautifully showcases how these characters are not some vessels carrying identities and token ideologies but are written to be human first.

It is also evident through how the film examines religion and God's role in our lives without resorting to an atheist's intellectual high ground. The movie's profundity is evident from how it successfully curbs exposition despite tackling themes of such philosophical complexity, and also from how it never resorts to showboating over the depth of its subject matter. Ingmar Bergman lamented the silence of God with philosophical sophistry, and Woody Allen devised irony and wit to cope with the same. On the other side of the globe, in this densely populated sub-continent, we seldom see people in existential despair. Is it because we are so occupied with each others' lives either in inspiring or intruding ways that we aren't left with any time to wonder about such enigmatic questions as the indifference of God? Perhaps everyday mundanity is the antidote to transcendental ambiguity.

Or maybe somewhere deep inside we all resonate with Raju that however broken our trust might be, we have no choice but to depend on people, and that's not such a bad thing. That scene where Raju lets in Radha on his philosophy is where you see director Venkatesh Maha at his best. A lesser writer could have written a quote-style gyaan-giving one-liner, and could have drawn a few whistles, but Maha is too honest to let an innocent Raju appear smarter than he is, for the sake of showcasing his own writing skills. If only Trivikram can understand this.

All the actors do a splendid job, and it would be a crime to only list out only a few here. While Sweekar Agasthi does a commendable job with this music, Aditya Javvadi and Varun Chafekar know that the technique has to stay behind the curtains, and compose their shots with utmost honesty.

Venkatesh Maha is here to stay, and we are fortunate for that. If you are one of those people who lament the preposterousness of the current crop of films, your prayers have been answered. Go watch Care Of Kancharapalem once. You will watch it again.
Share. Save. Connect.
Tweet
CARE OF KANCHARAPALEM SNAPSHOT 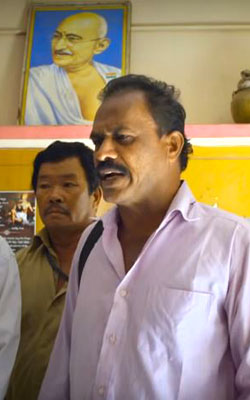 See Care Of Kancharapalem full details
CARE OF KANCHARAPALEM USER REVIEWS
1 - 5 OF 5 COMMENTS
POSITIVE  |  NEGATIVE |  NEWEST  |  OLDEST  |  MOST HELPFUL  |  LEAST HELPFUL
USER RATING
10
1 USER
Performances
Script
Music/Soundtrack
Visuals
NA
NA
NA
NA
Can watch again - NA
Good for kids - NA
Good for dates - NA
Wait for OTT - NA
Raghu M on 15th Sep 2018, 9:37am | Permalink
When was the last time I watched a movie, where I knew not a single face? Perhaps never before!
When was the last time I did not want to take my eyes off, even for a minute? Perhaps never before!
When was the last time I could not find any apparent illogic? Not in the recent past I remember!
How many times you get to watch such pure love, spanning across 10yr old to 50yr old? Not very often!
Was there any other Telugu movie where the love between two middle-aged elders was shown as pure and as intense as in the innocent youth love? Can't remember any.
Every single character was so relatable that, it is hard to believe, it is a "movie on screen"!

Hats off to the entire crew, both on and behind the screen!

Rangasthalam; Mahanati; Sammohanam; Chi La Sow; Goodhachari; C/o Kancharapalem.. What an year 2018 has been for Telugu film lovers! I am loving TFI!
Meenakshi on 14th Sep 2018, 4:26pm | Permalink
is 49 too old to look for anything other than warm companionship?????How farsical!!! Tell that to Donald Trump or Charlie Chaplin. 40 to 50 age is hardly the time to look for 'companionship' alone. Open Bharat Matrimony and you see tens of profiles of fortyish and ambitious(and very much unmarried) women still rejecting men because they are not successful enough. They surely are not looking for companionship. In fact, many people remain unmarried(especially men) because they are neither here nor there, material success-wise i mean, to find a sexually attractive mate and their desire to find such a spouse is so strong that they rather choose to remain single in pursuit of it. One may resign to settle for companionship eventually for everybody needs physical security but secretly they long for that elusive sexual fulfillment. I haven't seen the movie but any portrayal that it's all about companionship after 40s is nothing but oversimplification in a world with sexually unfulfilled lives galore.
Hari on 14th Sep 2018, 1:20am | Permalink
What a delightful movie !!! The pay off at the end just blew me away. I am also in awe of the producer's story. How gutsy of her to back this project after just looking at a short clip.
I would love to watch this movie again. Should be great fun.
Writer/Director Maha - Take a bow.
TFI seems to have turned a corner. Good times.


1. Story is the hero - amazing/natural/heartwarming

3. Actors LIVED in their roles

6.Photography is natural and realistic

ADVERTISEMENT
This page was tagged for
care of kancharapalem Telugu movie care of kancharapalem Telugu movie
telugu care of kancherapalem full
c/o kancharapalem cast
Care Of Kancharapalem telugu movie
Care Of Kancharapalem reviews
Follow @fullhyderabad
Follow fullhyd.com on
About Hyderabad
The Hyderabad Community
Improve fullhyd.com
More
Our Other Local Guides
Our other sites
© Copyright 1999-2009 LRR Technologies (Hyderabad), Pvt Ltd. All rights reserved. fullhyd, fullhyderabad, Welcome To The Neighbourhood are trademarks of LRR Technologies (Hyderabad) Pvt Ltd. The textual, graphic, audio and audiovisual material in this site is protected by copyright law. You may not copy, distribute, or use this material except as necessary for your personal, non-commercial use. Any trademarks are the properties of their respective owners. More on Hyderabad, India. Jobs in Hyderabad.