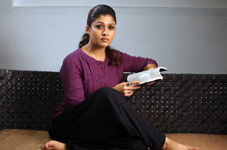 Josh / fullhyd.com
EDITOR RATING
4.0
Performances
Script
Music/Soundtrack
Visuals
7.0
4.0
6.0
8.0
Suggestions
Can watch again
No
Good for kids
No
Good for dates
Yes
Wait for OTT
Yes
Mayuri is titled "Maya" in the Tamil version. Nayantara's character is named Mayuri in the Telugu version, but when she calls people, their phones light up with the name "Apsara". She takes cheques addressed to Apsara. When you begin to think this will lead to a twist where it is revealed that Mayuri is actually someone called Apsara, you manage to lip-read and realise that the character is called Apsara in the Tamil version and no one bothered to correct it in the visuals here.

All the Tamil script is converted into Telugu. However, it is absurd when you read "cheekati" in Telugu and the corresponding English script reads "irul". Likewise, "velugu" becomes "velicham" in the English script. Dubbing as a process has undergone a sea change from the days when people read out Telugu from a letter filled with the curls and squiggles of Tamil script, so clearly someone's been sleeping on their job. And if they were going to be so lazy, why change the title of the movie when it doesn't at all affect the movie?

The dubbing quality isn't the only problem with Mayuri. It has three subplots - one with Mayuri (Nayantara), a separated single mother struggling to make ends meet as she tries to find acting jobs; one with a printing press which publishes a story on a ghost from an erstwhile asylum; and one with the asylum itself where the inmates were treated inhumanly a couple of decades back. They all come together by the end, but you're already bored to death by then.

If our description of the plot makes you feel we didn't create an interest in the primary conflict of the movie, well, neither does the movie itself. The establishing of the subplots takes its own time, and it stretches without really engaging you. The beginning has a nice bang to it and there are the jump-out-of-your-seat thrills, but they are so infrequent and so short-lived, you might consider reading the newspaper for more sustained horror.

And these subplots come with a plethora of characters. There are Eleven important characters in the movie - yes, we counted - but the director Ashwin Saravanan is no Steven Soderbergh. The end effect is a cluttering of screentime and mindspace. Saravanan succumbs to the temptation of infusing a consistent story in a horror flick when all that was required was to make the audiences jump at regular intervals. People walk into horror movies expecting a compelling storyline about as much as they walk into a Dhoom movie expecting logic.

And it is a pity because you can see that Saravanan is actually great at making a horror film. He gets the atmosphere right - you feel tense throughout. However, it barely pays off. The thrills are extremely effective, but the issue is they are non-existent for a large part of the movie. Seeing it all compels you to indulge in counterfactuals where Saravanan works with a scriptwriter who can actually put flesh and blood (figuratively and literally) in the proceedings. How good might that have been!

Practically every other department does a great job. Nayanatara, for one, has mastered the art of looking very attractive without exhibiting vast amounts of dermal real estate. And she acts comfortably in this one. Not just her, the entire cast is good. Not one of them is a bad actor. However, none of them is really required to do much. They all look their parts, display some basic acting chops, and go home with their paycheques.

The one department which is stellar is the cinematography. Sathyan Sooryan comes up with wonderful visuals, and even minor detail like juice falling into a glass makes an impact. The spooky atmosphere we talked about is built in good part by his spectacular work aided by some compelling score by the composer Ron Ethan Yohaan. The score makes you sit up and look out for the thrills (that just don't come enough). The editing, too, is very competent with interesting cuts making very good use of the cinematographer's interesting frames.

We saw some headline about the film with the actor Aari claiming that it was made on international standards. We agree. Mayuri is mounted very well with state-of-the-art production values. But that brings us to the common mistake that people make - praising or "encouraging" a movie for a "good attempt". We'll avoid this and instead choose to say that despite the great talent of everyone involved, Mayuri is a huge bore for a great part of the runtime.
Share. Save. Connect.
Tweet
MAYURI (2015) SNAPSHOT 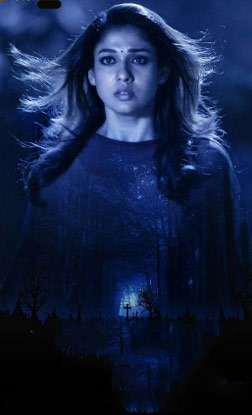 ADVERTISEMENT
This page was tagged for
Mayuri Telugu movie download
mayuri telugu movie download
tamil rockers .com telugu mayuri
mayuri movie download tamilrockers
mayuri telugu movie friday movies
Follow @fullhyderabad
Follow fullhyd.com on
About Hyderabad
The Hyderabad Community
Improve fullhyd.com
More
Our Other Local Guides
Our other sites
© Copyright 1999-2009 LRR Technologies (Hyderabad), Pvt Ltd. All rights reserved. fullhyd, fullhyderabad, Welcome To The Neighbourhood are trademarks of LRR Technologies (Hyderabad) Pvt Ltd. The textual, graphic, audio and audiovisual material in this site is protected by copyright law. You may not copy, distribute, or use this material except as necessary for your personal, non-commercial use. Any trademarks are the properties of their respective owners. More on Hyderabad, India. Jobs in Hyderabad.