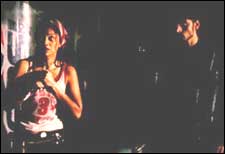 EDITOR RATING
3.0
Performances
Script
Music/Soundtrack
Visuals
NA
NA
NA
NA
Suggestions
Can watch again
NA
Good for kids
NA
Good for dates
NA
Wait to rent it
NA
Khamoshh is a film about a person who has a split personality. Before we start, a small question to test our readers' general knowledge: What are the top things that you can do if you have a split personality?

a. put it up for sale on ebay
b. read everything twice and therefore be well-read
c. bill your client for 2 persons everytime you dine out
d. sign up the "other guy" for the gym
e. kill people you don't like and blame it on the other guy

The film starts with a clutch of unrelated people landing up at a motel on a deserted highway, on a dark, rainy night. Sonia (Shilpa Shetty) is a girl whose car has broken down, and she is asking passing vehicles for a lift, since she has seen people do it in the movies. Avinash (Rajiv Singh) stops since he generally finds it hard not to help another human being. Also, Sonia is all drenched, her already tiny clothes are clinging to her body revealing outlines of her one-size-too-small undergarments, she is bending forward unable to stand upright in the downpour, and this is all too much suffering for Avinash to take.

Now their own car breaks down, too, and they hitch a ride in the car of another newly married couple, Varun (Rajat Bedi) and Mahek (Kainaaz Parweez). Avinash has earlier hit the wife of Sukhvinder (Vishwajeet Pradhan), Mitali (Gargi Patel), while driving his boss Kashmira (Rakhi Sawant) in the dark, and he has dropped them all at a motel run by Adi (Vrajesh Hirjee), to which all these people go now, too, to also find Inspector Jatin (Shahwar Ali) and a prisoner he's carrying along (Kelly Dorje).

In case you are wondering how we remember the screen and real names of so many obscure cast members, we are thorough professionals who carry a notebook, a pencil, another spare pencil, a sharpener, an eraser, a digicam, a jack to raise the level of our seat to see names better, a walkie-talkie to communicate with our colleagues simultaneously watching the film in other theaters scattered all across the city, and a special microphone to directly record all our conversations in our own satellite.

Anyway, they all die and the film ends. The lead character here is Sonia, who says that she has become a prostitute so that she can make a lot of money and buy some farmland that her father lost. It's a good thing her father did not lose a pen or something. There are more holes in the plot than elements in it that make sense. The guys somehow roped in Juhi Chawla in a guest appearance to lend some dignity to the film. She'll need to start her career all over again.
Share. Save. Connect.
Tweet
KHAMOSHH SNAPSHOT

ADVERTISEMENT
This page was tagged for
Khamoshh hindi movie
Khamoshh reviews
release date
Shilpa Shetty, Rajiv Singh
theatres list
Follow @fullhyderabad
Follow fullhyd.com on
About Hyderabad
The Hyderabad Community
Improve fullhyd.com
More
Our Other Local Guides
Our other sites
© Copyright 1999-2009 LRR Technologies (Hyderabad), Pvt Ltd. All rights reserved. fullhyd, fullhyderabad, Welcome To The Neighbourhood are trademarks of LRR Technologies (Hyderabad) Pvt Ltd. The textual, graphic, audio and audiovisual material in this site is protected by copyright law. You may not copy, distribute, or use this material except as necessary for your personal, non-commercial use. Any trademarks are the properties of their respective owners. More on Hyderabad, India. Jobs in Hyderabad.