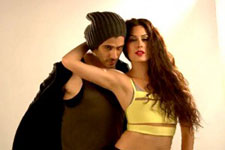 Swayamsrestha Kar / fullhyd.com
EDITOR RATING
3.5
Performances
Script
Music/Soundtrack
Visuals
2.0
1.0
4.0
5.0
Suggestions
Can watch again
No
Good for kids
No
Good for dates
No
Wait to rent it
Yes
There was a time when bell-bottoms-clad men with zazzy pelvic thrusts idolised Mithun Chakravorty for his zazzier pelvic thrusts in Disco Dancer. There was a time when Govinda was world-famous in India because of his ample gyrations to lyrics that had surpassed the lewd and bordered on the sexually harassive (case in point - "meri shirt bhi sexy, meri pant bhi sexy").

The times, they have since a-changed, and these days it's more about B-Boying and locking-and-popping for the Indian youth, brought to the shores of their awareness thanks to movies like the Step Up series. And speaking of Step Up, M.A.D. is a very very very... very watered-down descendant, and that is God's honest truth about this film.

M.A.D. is set in Sheffield, England, because let's be real, nobody can visualize hard-core street dancing being orchestrated on Indian streets. More than anything, the potholes aren't conducive to headstands.

To get the worse parts over with, the story first - Ayaan (Saahil Prem) is a pizza-delivery guy by day and street dancer extraordinaire by night, who fantasizes about getting selected for a dance troupe led by a smug son-of-a-gun called Caesar (Mark Monero). Make no mistake, there will be no stone left unturned in order to establish just how badass Caesar is and just why he deserves to be panted after by our curly-haired protagonist. The only way Caeser could have been cooler or more diabolical is if he had invented Facebook.

Then, there is the lissome lass called Aashira (Amrit Maghera) who, according to the film, is as nimble on the dance floor as a deer in the forest (all thanks to well-placed cameras that disguise the fact that none of these people is that good). Ayaan indeed thinks that she's all that and a bag of chips. Maybe he had trouble looking through his hair. One never knows. And, Aashira has got secrets of her own. How very thrilling and suspenseful!

Ayaan, after getting rejected by Caesar (who, in spite of being black himself, does not interfere with his troupe's overwhelmingly racist attitude towards Ayaan) decides to put together a motley crew of losers - all of whom are Asian and hence have been subjected to racism for the better parts of their lives - and starts practising for a dance competition that is supposed to be bigger than all the seasons of So You Think You Can Dance put together, determined to decisively win over Caesar's racist crew. Really, there is no limit to the overhyping that this film indulges in.

Also, talking of the crew, you cannot help but notice the obvious similarities in the basic structure of M.A.D. and Step Up 3. They even have the twins who do the crazy synchronised hip-hop routines. Only, in M.A.D., they are gangly, boring sardarjis.

And therein lies the fundamental flaw with this movie. Not only is it extremely bland with respect to the characterisation of a bunch of idiosyncractic people who have come together to realise their dreams and to, above everything else, prove a point; it also borrows themes from movies which were much better in terms of content, narration, and most importantly, choreography.

The dancing often loiters around in the backstage here, looking over forlornly at all the needless, under-acted drama that basks in the spotlight instead. Just once in the film do you actually sit up and take notice, and that is when Salah Benlemqawanssa, the renowned French hip-hop artist (who plays this Asian character called AJ in the film), burns his way across the scene with his stupefying moves. Also, the cinematography is obviously trying to make up for the lead actors' paucity of talent where dancing is concerned, as can be inferred from the clumsy interjection of close-up shots into dancing routines.

Saahil Prem tries his best to infuse some life into the character of Ayaan, and it is heartbreaking to watch him being let down by the entire film. In some frames, he almost reminds you of Farhan Akhtar in Luck By Chance. Amrit Maghera looks too plastic and clueless to hold any attention at all. Of the other cast members, only Mark Monero stands out as the impassive and enigmatic Caesar.

We at fullhyd are certainly not mad about Mad About Dancing. We will take our Govindas and our Mithuns in Eastman Color (do Google this term if you're floundering), thank you very much.
Share. Save. Connect.
Tweet
MAD ABOUT DANCE SNAPSHOT 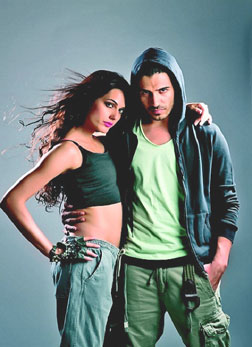 ADVERTISEMENT
This page was tagged for
Mad About Dance hindi movie
Mad About Dance reviews
release date
Saahil Prem, Amrit Maghera
theatres list
Follow @fullhyderabad
Follow fullhyd.com on
About Hyderabad
The Hyderabad Community
Improve fullhyd.com
More
Our Other Local Guides
Our other sites
© Copyright 1999-2009 LRR Technologies (Hyderabad), Pvt Ltd. All rights reserved. fullhyd, fullhyderabad, Welcome To The Neighbourhood are trademarks of LRR Technologies (Hyderabad) Pvt Ltd. The textual, graphic, audio and audiovisual material in this site is protected by copyright law. You may not copy, distribute, or use this material except as necessary for your personal, non-commercial use. Any trademarks are the properties of their respective owners. More on Hyderabad, India. Jobs in Hyderabad.