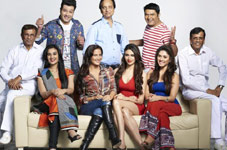 Nupur Barua / fullhyd.com
EDITOR RATING
4.0
Performances
Script
Music/Soundtrack
Visuals
5.0
4.0
4.0
5.0
Suggestions
Can watch again
No
Good for kids
No
Good for dates
No
Wait for OTT
No
When hardcore action and thriller directors shift to comedy, you can rest assured that it will be of the slapstick kind. Kis Kisko Pyaar Karoon, which stars television star Kapil Sharma in a debut role, is just a rehash of all the bad jokes that Indian cinema imposed on you. But more on that later - first, the story, and an attempt at understanding why this movie was even made.

Shiv Ram Kishan, a.k.a. SRK, a.k.a. Bholu (Kapil Sharma), has managed, through some unbelievable twists of fate, to marry three women. Never mind that this itself is illegal. It is not his fault, according to the movie. He is too helpful for his own good, and that ends up with him lying and cheating his way through life, with three women who are stupid enough to worship him. He is, after all, an innocent victim of circumstances, and he IS Bhola (innocent or village idiot - probably the latter).

Bhola has a friend named Karan (Varun Sharma), who is a lawyer. Karan suggests to Bhola that he shift all three wives, who obviously do not know of each other, into the same building. This way, his running around will reduce considerably. What both friends do not anticipate is that the three wives will become friends. What Bhola specifically does not expect is that the girl of his dreams, Deepika (Eli Avram), the one he wants to marry, will end up being a close friend to his other wives.

To add to his woes, Bhola's parents (Sharat Saxena and Supriya Pathak) land up to spend time with their son. Their relationship is complicated, and that makes Bhola very jittery. As he fumbles his way through life, spinning a larger tangled web of lies, he loses sanity of thought, and is aware that his days are numbered. His only intention, however, is to make Deepika his soulmate for life.

A lazier and more convenient comedy of errors, Kis Kisko Pyaar Karoon, as the name suggests, tells us that it is all right for one to lie and cheat other people, as long as somebody is laughing. This kind of slapstick, prevalent in the 1990s in most Govinda / David Dhawan movies, may not be making a comeback soon, but obviously, the misogyny and the innuendos still exist. Those with a warped sense of humour will love this film, and those who are nostalgic about Govinda may appreciate the thought put into trying to make this look like a clever story.

There is nothing much that happens in the movie, except for some supposedly witty lines, mostly mouthed by Bhola, the innocent one. The humour is tiresome for the most part, but there are some gems in the dialogues once in a while, especially in the maid's lines. The sub-plots, such as the entry of the complicated parents, do not do much for the story, and seem quite redundant.

Kapil Sharma can probably hold the interest of an audience when he makes a fool of himself in a studio, but to do that on the big screen is another issue altogether. He is most uncomfortable, or so it seems, and he is not exactly a talented artiste, as far as acting is concerned. Although much has been said about filling the void that Govinda left behind, it will be a while before Kapil Sharma, or others of his ilk, can go around pretending to be good enough to replace him from public memory.

The women playing the wives are rather bland and insipid, and since they have been placed in stereotyped roles, their performances are not very inspiring, either. Manjari Fadnis is the only known name, so to speak, and she barely creates ripples. The leading cast in general seems pretty indifferent. Jamie Lever, who plays the house help, is however terrific. She is the daughter of Johnny Lever, and has clearly inherited her father's comic timing. She has some of the best dialogues, and she does full justice to them. There is too little of her in the movie. The supporting cast helps to maintain the interest somewhat.

The music is situational, and worse than the 1990s music from similar movies. The colours in the videos are garish, the production design in amateurish, and the editing cannot save the travesty that Kis Kisko Pyaar Karoon is. Kapil Sharma fans may queue up for this film, but we think they are better off glued to the same person on TV. Watch some Govinda movies instead - at least the acting was better there.
Share. Save. Connect.
Tweet
KIS KISKO PYAAR KAROON SNAPSHOT 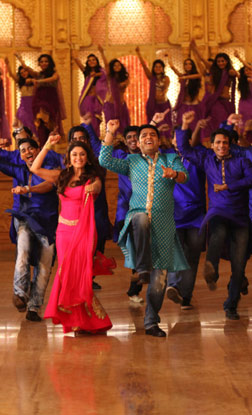 ADVERTISEMENT
This page was tagged for
Kis Kisko Pyaar Karoon hindi movie
Kis Kisko Pyaar Karoon reviews
release date
Kapil Sharma, Eli Avram
theatres list
Follow @fullhyderabad
Follow fullhyd.com on
About Hyderabad
The Hyderabad Community
Improve fullhyd.com
More
Our Other Local Guides
Our other sites
© Copyright 1999-2009 LRR Technologies (Hyderabad), Pvt Ltd. All rights reserved. fullhyd, fullhyderabad, Welcome To The Neighbourhood are trademarks of LRR Technologies (Hyderabad) Pvt Ltd. The textual, graphic, audio and audiovisual material in this site is protected by copyright law. You may not copy, distribute, or use this material except as necessary for your personal, non-commercial use. Any trademarks are the properties of their respective owners. More on Hyderabad, India. Jobs in Hyderabad.