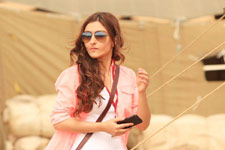 Swayamsrestha Kar / fullhyd.com
EDITOR RATING
5.5
Performances
Script
Music/Soundtrack
Visuals
6.0
5.0
5.0
5.5
Suggestions
Can watch again
No
Good for kids
No
Good for dates
No
Wait for OTT
Yes
People who have assiduously clung on to their seemingly ill-fated hopes that Indian cinema will one day move past the Grand Mastis and the Golmaals to produce films whose target audiences don't require to have the cognitive capabilities of sea anemones, heralded the arrival of War Chod Na Yaar as the first war comedy in India.

We could now have something to turn to when films like The Great Dictator and Dr. Strangelove left us all muddled in the head and feeling ashamed that India had once sent Jeans to the Oscars.

Director Faraz Haider was given congratulatory pats on the shoulder for having chosen to delve into such a sensitive issue for his first movie. Sharman Joshi came out of his self-imposed onscreen exile after Ferrari Ki Sawaari to promote the film. Jaaved Jaffrey had some valid leeway to tackle the post-Besharam blues.

But does the film live up to all the hype?

We wish we could answer in the affirmative. We wish we could praise the film to the high heavens and declare it to be the ideal kind of satire-comedy which reprimands and consequently aims to reform. But no, we will refrain.

Partly because we refuse to believe that Indian audiences are capable of assimilating thought-provoking satire only when it's over-simplified. Partly because we are put off by the fact that every war correspondent in Indian cinema has to be modelled after Barkha Dutt. And partly because of the liberal stereotyping that abounds in every frame of the movie. Seriously, not every terrorist is an Arabic-accent-laden pathan. Haven't we learnt anything from My Name Is Khan?

So, the story goeth thus. Rutt Dutta (Soha Ali Khan), a news reporter, is summoned by the Indian Defence Minister (played by Dilip Tahil), and is told that a war is going to be declared against Pakistan in two days. She is required to go and shoot live footage of the soldiers posted on the border, and release it (and here's the catch) two days after the war is declared.

The journalist is visibly excited, and promptly scampers off to arid desert land to fulfil a life-long dream. Because really, any journalist worth his/her salt lives to be sent off to a dangerously precipitous war zone (those who don't have such aspirations are forever shunned as the runt of the litter and are relegated to their due positions as weather forecasters - just kidding).

Once there, Rutt meets the charming Captain R. S. Rana (Sharman Joshi), and discovers the startling friendship between the captain of the Indian armed forces and that of the Pakistan army, a goofy smart alec by the name of Qureshi (Jaaved Jaffrey).

This unlikely friendship forms the USP of the movie. Through games of across-the-border Antaakshari, and fond name-calling and leg-pulling between the two captains, we are told that opposing armies are still made of humans who might not have the same feelings of animosity towards each other as the leaders who control them. We are told that the dude on the other side of the border is most likely to feel the same way about being holed up in harsh environments away from the comforts of home and family. We are told that war is never the answer.

It is when such a thought-provoking premise is let down by half-baked execution that we feel mildly indignant. For starters, satire that seeks to address a complex issue by reducing it to binaries, and the people involved in it to embarrassing stereotypes, is satire that's not trying hard enough.

For example, it is shown that the Chinese defence chief (also played by Dilip Tahil) is in cahoots with his Pakistani counterpart (Dilip Tahil again), while the American chief-of-arms (guess who... Tahil, of course) is double-crossing both India and Pakistan. As a plot device, it sounds absolutely terrific. The idea is to use the same actor in the four roles in order to convey the message that all over the world, only a certain kind of personality delights in creating war and treating it as a playground. But the way that the characters are caricaturised into unsubtle buffoons is anything but comical.

To give Faraz Haider his due credit, there are moments of sparkling humour in the screenplay. The lively interactions between Rana and Qureshi are definite high-points in the movie. Sharman Joshi plays the suave yet can-make-crude-jokes-when-they're-called-for Rana with an endearing honesty. Similarly, Jaffrey is supremely confident as Qureshi. However, Soha Ali Khan is a huge letdown.

Sadly, this is not it. This is not the war comedy that India will proudly display in the shelves of history which are dedicated to examples of celluloid excellence. We cannot overlook the lack-lustre dialogues, the half-hearted handling, the rampant stereotypes, and most of all, the fact that even after all these years, we make fun of the Punjabi language by articulating it with the holy mannerisms of Navjot Singh Sidhu. Not cool. Not cool at all.
Share. Save. Connect.
Tweet
WAR CHHOD NA YAAR SNAPSHOT 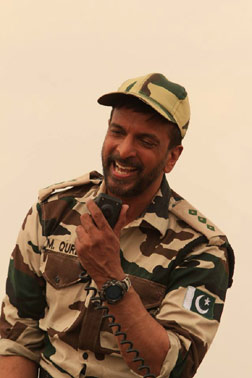 ADVERTISEMENT
This page was tagged for
War Chhod Na Yaar hindi movie
War Chhod Na Yaar reviews
release date
Sharman Joshi, Soha Ali Khan
theatres list
Follow @fullhyderabad
Follow fullhyd.com on
About Hyderabad
The Hyderabad Community
Improve fullhyd.com
More
Our Other Local Guides
Our other sites
© Copyright 1999-2009 LRR Technologies (Hyderabad), Pvt Ltd. All rights reserved. fullhyd, fullhyderabad, Welcome To The Neighbourhood are trademarks of LRR Technologies (Hyderabad) Pvt Ltd. The textual, graphic, audio and audiovisual material in this site is protected by copyright law. You may not copy, distribute, or use this material except as necessary for your personal, non-commercial use. Any trademarks are the properties of their respective owners. More on Hyderabad, India. Jobs in Hyderabad.