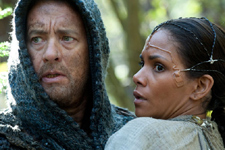 Kritika Deval / fullhyd.com
EDITOR RATING
9.0
Performances
Script
Music/Soundtrack
Visuals
9.0
8.0
9.0
9.0
Suggestions
Can watch again
Yes
Good for kids
No
Good for dates
Yes
Wait for OTT
No
Cloud Atlas is all over the place! Like, literally. And we mean that in the best of all possible ways. When a book of the same name, written by David Mitchell, was designated as "unfilmable" by its own author, Tykwer and the Wachowskis decided that that was bull. And, boy o boy, aren't we glad that they did.

The scope of Cloud Atlas is vast, its themes universal, and its voices boundless. Set in six different keyframes on a timeline that spans from mid-1840s to a post-apocalyptic future, the movie slowly but steadily accelerates through ideas of ascent and descent, of freedom and immutable servility, of reincarnation, of karma, of "the weak" who are "the meat the strong do eat", of... oh, a thousand other things that could make up a book, which they already have, of course.

Told through the medium of journals, letters, and other literary media, the plot also takes us through the evolution of the social order, real as well as hypothetical. Social order invariably involves the oppressed and the oppressor, and the forms that the two take change over time and story, with varying degrees of seriousness.

Here's a list of the stops we make on this long journey to help you try and make sense of things amidst all the "and"s and the "or"s.

1. The Pacific Journal of Adam Ewing: Circa 1850. Adam Ewing (Jim Sturgess), an exemplary young lawyer on a voyage to America protects a stowaway slave (David Gyasi), only to have the favor returned in a heroic manner.

2. Letters from Zedelghem: Robert Frobisher (Ben Winshaw), an aspiring English musician, finds work as amanuensis to one of the greatest musical geniuses of that time, which happens to be 1931. Robert has dreams of a melody for the ages.

3. Half-Lives: The First Luisa Rey Mystery: In 1975, a young journalist named Luisa Rey, in California, sticks out her neck to spread the word that a nuclear plant in the offing is deliberately unsafe.

4. The Ghastly Ordeal of Timothy Cavendish: It is 2012, and Timothy Cavendish (Jim Broadbent) is an old man in big trouble. On the run from goons, he is accidentally stuck in an old-age home run by his vengeful brother. The only way to get out is to garner the aid of his senile "inmates".

5. An Orison of Sonmi-451: This futuristic world takes us to a totalitarian Korea where genetically-engineered physically perfect women are churned out in scores to serve the "consumer" in silence. Only, Sonmi-451 (Doona Bae), one of millions of these doll-women, realizes that this isn't the way things should be.

6. Sloosha's Crossin' an' Ev'rythin' After: This post-apocalyptic hunter-gatherer world - where written language has disappeared, and spoken language has eroded to childhood lisps and a shrunken vocabulary (example: when we want to say we loved the movie, we say "true-true") - is where our story begins and ends. Zachry (Tom Hanks) is a shepherd on Hawaii, and Meronym (Halle Berry) is his sister-in-law who is one of a handful of technologically advanced people alive. She has something "true-true" to tell Zachry, but he's not listening.

All these little stories are connected in grand ways, the most compelling of which is a musical piece created by Frobisher that goes by the name "Cloud Atlas Sextet". The connection occurs in many other ways, too, and that is a puzzle that makes this movie such a fun watch. Not that the puzzle is too difficult. On the contrary, it is perhaps a little too easy to figure out. Using the same actors to play a role each in different times just might be a tad too obvious, despite the excellent make-up and the near faultless performances.

The performances. The perfect cast of this movie probably jumped up and down in sheer elation on reading the script. We'll bet that their thespic muscles are in real good shape after this chance to show off their acting chops via multiple roles spanning over different races, ages and genders. Frobisher, Somni, and Timothy Cavendish perform especially beautifully.

The movie is beautifully cut and edited. The pacing is perfect. The cinematography, the background score, and just about everything keeps all your senses engaged from the word go.

Perhaps some might say that for a movie this big, in fact as well as in idea, you come away with too many tidily tied up loose ends. But, the I-just-saw-a-good-movie buzz it leaves you with makes up for any need you might have for cinema-induced self-introspection.
Share. Save. Connect.
Tweet
CLOUD ATLAS SNAPSHOT 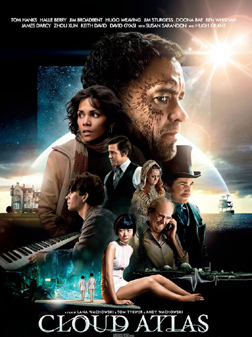 ADVERTISEMENT
This page was tagged for
Cloud Atlas english movie
Cloud Atlas reviews
release date
Tom Hanks, Hugo Weaving
theatres list
Follow @fullhyderabad
Follow fullhyd.com on
About Hyderabad
The Hyderabad Community
Improve fullhyd.com
More
Our Other Local Guides
Our other sites
© Copyright 1999-2009 LRR Technologies (Hyderabad), Pvt Ltd. All rights reserved. fullhyd, fullhyderabad, Welcome To The Neighbourhood are trademarks of LRR Technologies (Hyderabad) Pvt Ltd. The textual, graphic, audio and audiovisual material in this site is protected by copyright law. You may not copy, distribute, or use this material except as necessary for your personal, non-commercial use. Any trademarks are the properties of their respective owners. More on Hyderabad, India. Jobs in Hyderabad.