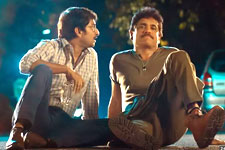 Pranita Jonnalagedda / fullhyd.com
EDITOR RATING
6.0
Performances
Script
Music/Soundtrack
Visuals
8.5
6.0
7.0
7.5
Suggestions
Can watch again
No
Good for kids
Yes
Good for dates
Yes
Wait to rent it
No
If the underlying concept of Devadas had to be summed up into a single line, it could best be done by citing this line from the film: "Aina chavuki bratukuki friendship enti?"

Because the entire film, even though we realise it only later, explores the strange friendship between life and death. Except, both these come in human form through Deva, a don representing death, and Das, a doctor (MBBS, MS, gold medalist, as we are reminded again and again) representing life.

That might sound complicated, but Devadas showcases it all with an element of fun, or as they say entertainment, weaved in. Deva (Nagarjuna) and Das (Nani) are brought together in a clichéd hurt-don-visits-doctor-in-the-middle-of-the-night way, but what ensues is a bond of friendship that sees each of them taking a leaf from the other's lifestyle as they continue on their own different journeys.

Devdas has circumstances contrive to make Das, an academically accomplished doctor with dreams of working in a multispecialty hospital, work in a ravaged old clinic that he hates. When the hugely notorious criminal Deva barges into the clinic one night with a bullet in his chest, little does Das know that life will change and that this stranger will become his closest and only friend. Deva takes you inexorably into the world of Sanjay Dutt's Munnabhai MBBS, with Nag's histrionics as the leader of the gang reminding you continuously of the Raju Hirani film.

Devadas starts off slow, taking its time to establish the lead characters. The humour makes you quickly fall in love with them, and it all looks set to be a hell of a joyride, but the entire wafer-thin storyline of the film soon starts playing spoilsport.

At times it feels difficult to connect with the goings-on because the main conflict isn't established well. Nagarjuna is presented as a don "who has not been seen by anyone for over a decade", but we know nothing about his past. We also do not connect with his emotion of avenging the death of his adoptive father (Sarath Kumar) because their bond hasn't been established at all. The same is the case with the romance track between Das and Pooja (Rashmika Mandanna), which has no depth to it. While it is a similar scenario with the love story of Deva and Jahnavi (Akanksha Singh), there are thankfully at least some moments there that show their connect.

Another trouble with the movie is how it is a drag at times. Like the sequence where a little boy of seemingly just two years is telling Nagarjuna about the "boochodu" inside him, and going on and on about how he coughs blood. Yes, we empathise with the boy's leukemia, but it's hard to buy that a little boy would have so much to say about it. Another example is the car chase sequence, though paradoxically it takes us into the best scene in the film where the whole conversation around life and death happens.

Nani delivers yet another phenomenal performance. His wisecracks and mannerisms bring the house down several times, and his chemistry with Nagarjuna works spot on. It's fun to see him play the dude in distress towards the finale as Rashmika Mandanna - in a clichéd heroine role that she plays to perfection - gets into action mode. As for Nagarjuna, it is a delight to watch him in the action avatar after quite long, and it brings back memories of his heyday. His sequences with Akanksha Singh are adorable, reminding you of why he has been the quintessential Manmadhudu of Telugu cinema.

What's sad though is that an able actor like Naveen Chandra is wasted in a boring role that didn't need a known face like his. The same is the case with Kunal Kapoor who makes his Telugu debut in a role that will be forgotten even before you leave the cinema hall. Both the female leads, despite having characters that add importance to the plot, too are just wasted. One performance that stands out though is that of Kalakeya Prabhakar, who gives quite a fun twist to his portrayal of a don's sidekick.

Mani Sharma hasn't lost his magic touch, and gives you some soulful music, balancing it with racy tunes for the background music. And Shamdat Sainudeen produces some bright visuals. But what this film really needed was a tighter screenplay.

On the whole Devadas is a frothy, feel-good film that might appeal to you in parts, but leaves you wanting for more as a package. A perfect team of actors, a production house with legacy and a story that had potential ultimately leave you with just a few laughs (though loud ones at that). It's like visiting the most innovative saloon in town to end up getting a boring haircut.
Share. Save. Connect.
Tweet
DEVADAS SNAPSHOT 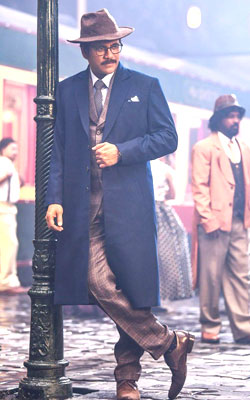 See Devadas full details
DEVADAS USER REVIEWS
1 - 2 OF 2 COMMENTS
POSITIVE  |  NEGATIVE |  NEWEST  |  OLDEST  |  MOST HELPFUL  |  LEAST HELPFUL
USER RATING
9.0
1 USER
Performances
Script
Music/Soundtrack
Visuals
NA
NA
NA
NA
Can watch again - NA
Good for kids - NA
Good for dates - NA
Wait to rent it - NA
Saradhi on 16th Oct 2018, 3:23pm | Permalink
Much better than Aravinda Sametha. I have really enjoyed this movie.
Nageswarrao on 28th Sep 2018, 8:33pm | Permalink
Screenplay is just another name for movie script. A movie cannot need a 'good screenplay' because there is no movie without a screenplay i.e. a script. The point is it is not a 'play on the screen', an annoying sense in which it is mentioned by many a reviewer/director/even Telugu screenwriter. It is nothing but a text form of the movie but not a craft that is part of the movie. In a sense, a movie itself is the screenplay or vice-versa.
nagarjuna on 30th Sep 2018, 3:24pm | Permalink
Thanks dad for the rating. But what are you talking about?
Akhil on 2nd Oct 2018, 7:19pm | Permalink
Dad..I need a hit very bad
Chaitanya on 30th Sep 2018, 4:40pm | Permalink
I understood pretty well what grandpa said - and he said it well.
Samantha on 6th Oct 2018, 8:07pm | Permalink
Did you really understand ? I doubt it ...
Shiva on 3rd Oct 2018, 7:17pm | Permalink
I hope the movie is as good as this comment chain
LEAVE A COMMENT
fullhyd.com has 700,000+ monthly visits. Tell Hyderabad what you feel about Devadas!
MORE MOVIES
Latest Reviews
Satyameva Jayate 2
Ghostbusters: Afterlife
Eternals
Eternals (Telugu)
Eternals (Hindi)
more
Dune
Venom: Let There Be Carnage
No Time To Die - Telugu
No Time To Die - Hindi
No Time To Die
SR Kalyana Mandapam
Ippudu Kaaka Inkeppudu
Thimmarusu
Kadhanika
Shukra
Contemporary Reviews
Nawab
Sui Dhaaga
Andhadhun
FryDay
Helicopter Eela
more
Aravindha Sametha
First Man
Batti Gul Meter Chalu
Nannu Dochukunduvate
Manmarziyaan
Shailaja Reddy Alludu
The Nun (Telugu)
The Nun
The Nun (Hindi)
Random Reviews
Behind Enemy Lines (Hindi)
Last Emotion
Panic Room (English)
Khwahish
Bewafaa
more
Madhura Kshanam
Andagatthelu Jagrattha
Jannat
Kisaan
Action Replay
Mogudu
Life Of Pi (3D)
Palnadu
Daawat-E-Ishq
Bloodshot
SEARCH MOVIES
Dissatisfied with the results? Report a problem or error, or add a listing.
ADVERTISEMENT
SHOUTBOX!
{{todo.name}}
{{todo.date}}
[
ip{{todo.ip}}
]
{{ todo.summary }}... expand »
{{ todo.text }} « collapse
First  |  Prev  |   1   2  3  {{current_page-1}}  {{current_page}}  {{current_page+1}}  {{last_page-2}}  {{last_page-1}}  {{last_page}}   |  Next  |  Last
{{todos[0].name}}

ADVERTISEMENT
This page was tagged for
Devadas telugu movie
Devadas reviews
release date
Nagarjuna, Nani
theatres list
Follow @fullhyderabad
Follow fullhyd.com on
About Hyderabad
The Hyderabad Community
Improve fullhyd.com
More
Our Other Local Guides
Our other sites
© Copyright 1999-2009 LRR Technologies (Hyderabad), Pvt Ltd. All rights reserved. fullhyd, fullhyderabad, Welcome To The Neighbourhood are trademarks of LRR Technologies (Hyderabad) Pvt Ltd. The textual, graphic, audio and audiovisual material in this site is protected by copyright law. You may not copy, distribute, or use this material except as necessary for your personal, non-commercial use. Any trademarks are the properties of their respective owners. More on Hyderabad, India. Jobs in Hyderabad.