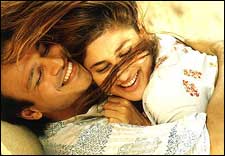 Deepa Menon / fullhyd.com
EDITOR RATING
7.0
Performances
Script
Music/Soundtrack
Visuals
NA
NA
NA
NA
Suggestions
Can watch again
NA
Good for kids
NA
Good for dates
NA
Wait for OTT
NA
Guess who's back? After a long break, during which he left us to the mercy of other, lesser filmmakers, Mani Ratnam returns. And during the first half of his highly awaited release, all you're doing is greedily drinking in all those luscious details that each one of his films abounds in. This is one beautifully made film, whatever the other issues with Yuva might be. Ratnam's work, at its best and worst, has always had the ability to show you that this is what a film could be.

And if Yuva didn't live up to its tall promise, it's because somewhere along the way the director got caught up in his own genius for detail. And the pace of the story suffers as a result. A film about three young men, tied together by one violent collision of their lives, Yuva explores an unconventional mode of story telling. The film starts with its climax, and works its way backwards to show you how things came to be.

Lallan is a small time goon on his way to tackle his first big assignment. We watch as he pulls up alongside a man on a motorcycle and shoots him thrice before driving away. A flashback takes us to where it all began in one of Kolkata's crowded chawls, as Lallan returns home to his wife from prison. The man who bailed him out has a job for him.

Much against his wife, Sasi's (Rani Mukherjee) better sense, Lallan enters the world of politics where he can make a quick buck organizing a rally, quelling an uprising and, once in a while, eliminating a crucial part of the competition. Sasi is steadily more appalled at how deep into the mire her husband is sinking, and she fights him every step of the way, with everything she's got.

Abhishek Bachchan is surprisingly good in his role as the perpetually angry young man, and Rani Mukherjee plays Sasi with a confidence in her style that's endearing. The duo share great chemistry and since romance is one of Ratnam's favourite themes, the moments of intimacy between the two are crafted superbly. This couple's story is perhaps the most interesting aspect of the film, and part of what makes Yuva a less-than-satisfying movie is how these two characters are more or less abandoned towards the end. Seemed like a waste.

Lallan works for a corrupt politician (pardon the redundancy, but this film also has the other kind so it's important to make the distinction). Om Puri plays Bandopadhyay, who isn't a particularly diabolical man; he's just a symbol of everything that's wrong with politics today. And it's this messed-up system that Michael Mukherjee and his army of college students have set out to clean up.

Ajay Devgan, as the strident student-leader, is hardly young enough to play a collegian, but this doesn't seem such a significant detail. Michael's character is intense, idealistic and politically charged, and Devgan does justice to it. Esha Deol plays his love interest and, like Karriena Kapoor, she doesn't have much of a presence in the film. Their romance is breezy and told with a certain casualness of style, as it is only secondary to Michael's crusade.

The student's party begins to gain momentum and soon has the attention of Bandopadhyay, who has much to lose from Michael's rise to power. So he hires goons (Lallan and co.) to 'dissuade' this rebel from creating too much trouble. The plan backfires when Michael decides to run the next elections against Bandopadhyay. This is when the order goes out to 'take care' of Michael once and for all.

The third person present at the scene of the shooting is Arjun (Vivek Oberoi). Now Arjun is about as regular a guy as you'll find, whose only intention in life, apart from going to the US, is to flirt with anything in a skirt that won't slap him. The latest skirt that has his attention belongs to Mira (Karriena Kapoor). By the time you've gotten to their story, you're halfway through the film and their courtship, however pleasant, seems unnecessarily drawn out.

It's at this point that things really begin to happen as we cut to the present, post the shoot-out. Arjun, who happens to be on the Howrah bridge when the accident, takes Michael to the hospital, where he recovers. The former playboy now turns serious and fights the elections with his new friend. Vivek Oberoi is too irredeemably yuppie for this role, and his character takes up more screen time then it rightfully deserved.

All this succeeds in slowing the movie down, and the second half draws to a somewhat rushed conclusion. A film about the country's youth taking a more proactive stance in politics couldn't have come at a better time. But you can't help but think that the film would have had a more powerful impact if only it didn't take so many detours along the way.

Even so, with Mani Ratnam in the driver's seat, the one thing you are assured of a sumptuous visual feast. The camera work, the stunts, the set design, even the props…everything is perfect. So even if you're not really sure where you're going, you will enjoy the ride.
Share. Save. Connect.
Tweet
YUVA SNAPSHOT

The rating for this movie was based purely on it own merit, not the fact that it's a Mani Ratnam flick. But my opinion might have been influenced by the hindi movies i've watched recently (strictly crap).

Has fullhyderabad been so kind to it because it is a mani ratnam movie?

ADVERTISEMENT
This page was tagged for
Yuva hindi movie
Yuva reviews
release date
Abhishek Bachchan, Ajay Devgan
theatres list
Follow @fullhyderabad
Follow fullhyd.com on
About Hyderabad
The Hyderabad Community
Improve fullhyd.com
More
Our Other Local Guides
Our other sites
© Copyright 1999-2009 LRR Technologies (Hyderabad), Pvt Ltd. All rights reserved. fullhyd, fullhyderabad, Welcome To The Neighbourhood are trademarks of LRR Technologies (Hyderabad) Pvt Ltd. The textual, graphic, audio and audiovisual material in this site is protected by copyright law. You may not copy, distribute, or use this material except as necessary for your personal, non-commercial use. Any trademarks are the properties of their respective owners. More on Hyderabad, India. Jobs in Hyderabad.