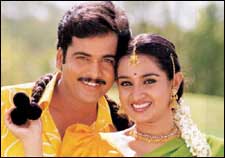 Priyanka Pulla / fullhyd.com
EDITOR RATING
5.0
Performances
Script
Music/Soundtrack
Visuals
NA
NA
NA
NA
Suggestions
Can watch again
NA
Good for kids
NA
Good for dates
NA
Wait to rent it
NA
Tollywood humor, titillation and romance are clearly defined and bounded breeds by themselves. They are complete groups of actions that are so well-etched, you can perform arithmetic operations on them. Add a unit of titillation, subtract the romance, and voila! You have a serviceable B-grade film. Add two units of humor, and one of titillation, and bingo! You have a handy little comedy. Put in all three in equal measure, so that titillation remains restrained, and presto! You have a snappy little flick called Adirindayya... Chandram.

What you get is as precise as the mathematical equation, and incidentally, also equally humdrum.

This story is about the husband who philanders, and learns for himself that all he needs is his wife. That's another little Tollywood movie-making rule you've got to remember. Morality performs the function of the ubiquitous redeeming factor that ought to be present in all Tollywood titillation.

So Chandram (Sivaji), who is blessed with an angelic wife Rajyam (Laya) and a 6-year-old daughter Pinky, strays one day after hearing taunts by his colleagues about the edella durada (the seven-year itch). And when his wife and daughter are away at his in-laws, he decides to try dallying with a hottie called Paddu (Sangeeta).

Within the restraints of the protective arms of morality, titillation, as prescribed, carries on unabated. Like a charm bracelet worn to ward off the evil eye, this technique bends the natural laws. So Chandram has fun with the girl upstairs. He looks up her skirt, does rain sequences with her, and finally lands in bed with her too.

However, since Adirindayya… is publicized as a comedy and a family movie, the titillation cannot exceed one unit. Therefore, Chandram suddenly remembers his roots, and his manages to save him before his purity is tainted.

Romance of course has its own place. Mainly in scenes of Chandram getting some from the playfully protesting Rajyam, and bringing home mallepullu to make up for forgetting their engagement day - this one is easy to pull without a hitch.

Humor is the easiest accomplished of all, because you have a few floppy discs with the codes dug into them. Called Brahmandandam, Venu Madhav, Mallikarjun Rao and Ali, they do their thing, namely getting their clothes ripped in at least one scene, and getting one below-the-belt body part diseased/injured somewhere in the movie.

Venu Madhav gets bashed up in one scene, and Brahmanandam has Piles through out the movie. Meaning he can't sit down anywhere, and elicits gesticulative explanations from his colleagues for his condition.

Sometimes, the humorists flit from the simpler arithmetic to calculus-like operations that grow the humor algorithm organically. Like Mallikarjun playing the part of a forgetful guy who gets up in the middle of the night and thinks he is in a temple. These bits of humor become trademarks of the movie, and that is how two Tollywood movies are differentiated.

Well, that about sums up Adirindaiyya… Chandram! It sure is a good watch for the guaranteed humor, but the rationed quantities of romance and titillation might just let you down a little. Meanwhile, it may be a more bearable watch than some of the other flicks running in town. So if a Telugu movie simply has to be on your agenda today, you might as well try catching this one.
Share. Save. Connect.
Tweet
ADIRINDAYYA CHANDRAM SNAPSHOT

ADVERTISEMENT
This page was tagged for
Adirindayya Chandram telugu movie
Adirindayya Chandram reviews
release date
Sivaji, Laya
theatres list
Follow @fullhyderabad
Follow fullhyd.com on
About Hyderabad
The Hyderabad Community
Improve fullhyd.com
More
Our Other Local Guides
Our other sites
© Copyright 1999-2009 LRR Technologies (Hyderabad), Pvt Ltd. All rights reserved. fullhyd, fullhyderabad, Welcome To The Neighbourhood are trademarks of LRR Technologies (Hyderabad) Pvt Ltd. The textual, graphic, audio and audiovisual material in this site is protected by copyright law. You may not copy, distribute, or use this material except as necessary for your personal, non-commercial use. Any trademarks are the properties of their respective owners. More on Hyderabad, India. Jobs in Hyderabad.