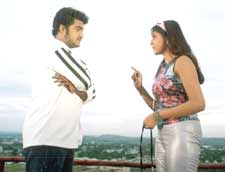 Mithun Verma / fullhyd.com
EDITOR RATING
5.0
Performances
Script
Music/Soundtrack
Visuals
NA
NA
NA
NA
Suggestions
Can watch again
NA
Good for kids
NA
Good for dates
NA
Wait for OTT
NA
Subbu is a reminder to this gratitude lacking generation of all those aching epochs, all the way through the evolution of the human species from Australopethicus through homo habilis and homo erectus to homo sapiens, with the director, hero, heroine and us reliving those key moments respectfully... or make that respectively.

Subbu aka Balu aka Balasubramaniam (NTR Junior) lives his life singing and dancing in the college, unaware of the catastrophes that would dawn upon a mortal with so many aliases. After the customary display of philanthropy, he falls for Niraja (Sonali Joshi), who is the undisclosed donor of the college scholarship for underprivileged students. She does this by way of repentance towards a great misdeed by her family, it seems.

Subbu admits a dying, unmarried, accident hit woman in the hospital, and her diagnosis reveals her pregnancy. She confesses the cause for the fertility as being a certain Balasubramanyam, which incidentally is the name in the hospital records, too. The enraged father tracks down the not guilty one, and adds an insult to injury by messing up our hero's face when he denies any knowledge of the copulation. Then the bad guy gets Subbu's mom and sis convicted of vyebhichaaram, leading to their killing themselves. But Subbu still spares the baddie, realising nothing would bring back his family.

Your packing to catch the next train to Bermuda is almost finished by now. Anyways, this entire saga is narrated by some Ravi who's going in between the hero and the heroine that haven't met as yet. Niraja now falls for Balu, the unmet Ravi's friend, whose divine forgiveness has spared her a father, but starts liking Subbu, who wrestles in the mud for her.

Subbu confesses his love to her, but in a dream - in reality he assumes her to be a sweetheart of Ravi. He does admit his feelings for her in reality, too, but the circumstances are unreal. Anyhow, you don't care by now, realizing that a circle is a line that meets its other end without ending.

Everything perfectly falls in place in the railway station, which has been serving consistently as the Boddha Vriksha since DDLJ. Balu and Subbu are one and the same. Applause.

NTR looks the part. He is Balu, Subbu and Balasubramaniam put together in a single frame. He should take a lead from Sridevi and get that nose done - whenever he sneezes, he's sure to blow his hat away. As we've noted in the past, however, he unbelievably dances well.

A sub-literate Esha Deol look-alike is simply intolerable as a leading lady. Brahmanandam and AVS try to rescue, and it remains just a trial. The music isn't exactly an auditory abomination. The best part of the movie is a song named Mast, Mast, and the worst is Hari, Hari, an offence to good taste and decency.

ADVERTISEMENT
This page was tagged for
subbu movie review
Subbu Junior NTR Subbu mast 500 Sangathan
Subbu telugu movie
Subbu reviews
release date
Follow @fullhyderabad
Follow fullhyd.com on
About Hyderabad
The Hyderabad Community
Improve fullhyd.com
More
Our Other Local Guides
Our other sites
© Copyright 1999-2009 LRR Technologies (Hyderabad), Pvt Ltd. All rights reserved. fullhyd, fullhyderabad, Welcome To The Neighbourhood are trademarks of LRR Technologies (Hyderabad) Pvt Ltd. The textual, graphic, audio and audiovisual material in this site is protected by copyright law. You may not copy, distribute, or use this material except as necessary for your personal, non-commercial use. Any trademarks are the properties of their respective owners. More on Hyderabad, India. Jobs in Hyderabad.