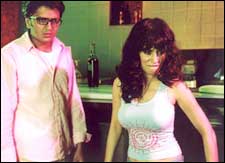 Ghazala Rizvi / fullhyd.com
EDITOR RATING
3.0
Performances
Script
Music/Soundtrack
Visuals
NA
NA
NA
NA
Suggestions
Can watch again
NA
Good for kids
NA
Good for dates
NA
Wait for OTT
NA
When the RGV Factory decides to expand its production range to include the business of comedy, you expect to have a delectable respite from the cheating-husband, drop-pants genre of humor. And when the movie has Antara Mali's hands in its story and direction, you expect to enjoy other parts of the Naach Girl on the screen.

That Mr Ya Miss is a welcome change of plot and premises, is true enough. However, what you get to see of the lady is a debatable issue. If still interested, read on.

The story goes this way. Sanjay (Aftaab Shivdasani) and Shekhar (Ritesh Deshmukh) are ad-execs in a big ad agency. While Shekhar is a subdued sidekick, Sanjay considers himself to be the chosen one. Not by the Almighty, but by the gorgeous divas of the corporeal world. Overly proud of his lithe and limber body, and his success in the sack, Sanjay thinks he is on solid ground as far as matters of the heart are concerned.

Until one day, when his aggressive sex-life kills him – no, not cardiac arrest, but a lethal head injury provided by a jealous lover. Now, most people, when they die, decide to keep quiet about it. But not Sanjay. In a debate with Shiva and Parvati about the final abode of his soul, he wins a chance to make atonements and get a free passage to heaven.

The transition back however entails more than cultivating a sympathetic outlook towards females. Sanjay bounces back on ground with an earth-shattering revelation. He is now Sanjana (Antara Mali) in all her luscious avtaar, condemned by goddess Parvati to see the world through a woman's eye.

Any worries that you've had about Sanjay's FQ (Flirtation Quotient) taking a dip after this transformation are quickly dispelled by Sanjana carrying out the ogle-whistle jig all over town. The bubble ruptures when she (but as a soul, he) herself has to bear the brunt of the male testerostone.

She suddenly discovers that the world is full of men with slobbery breath, lecherous eyes and paws that they can't keep off of feminine skin. From being looked up her skirt to being nearly raped, Sanjana slogs through an alien life, sometimes getting a flip in return of expectations of sexual gratification, and sometimes feeling the glass ceiling bearing down on her.

Taking possession of Sanjay's flat and job is done with a little ingenuity, and claiming the affections of Shekhar is a cheesecake. What is difficult is keeping her short dresses down and long tresses under check. With high heels making her do a pole dance, the gait of a smitten gorilla, and rambunctious mannerisms, Sanjana still manages to get pregnant with Shekhar.

And like all the womanly woes descending on her from all directions were not enough, Sanjana is also now accused of murdering Sanjay.

The movie will keep you riveted to your seat throughout. With enough situations created from the soul-man-body-woman ploy to tickle you, Mr Ya Miss has ample p-and-s jokes. With a few raunchy numbers by Amar Mohile, the movie's music returns are insured. What prevents it from becoming an outright winner is Antara flowing off the handle with her character.

We have no idea what the correct protocol is for a man's behavior in such circumstances as Sanjay's, and neither does Antara. She appears redundant, over the fence, and clueless – and appears like a woman trying to act a man, not the other way round, which was the actual idea.

Aftab looks mature and hot, while Ritesh, with his me-desperate looks, has little say in the matter. The film could have done with a little more contribution from this talented actor. It's a one-horse movie, and RGV has again betted on Antara to carry the cross on her shoulders. It waits to be seen how many of us are taking it.
Share. Save. Connect.
Tweet
MR. YA MISS SNAPSHOT

ADVERTISEMENT
This page was tagged for
adirindayya chandram sex photos movies
Mr. Ya Miss hindi movie
Mr. Ya Miss reviews
release date
Antara Mali, Aftaab Shivdasani
Follow @fullhyderabad
Follow fullhyd.com on
About Hyderabad
The Hyderabad Community
Improve fullhyd.com
More
Our Other Local Guides
Our other sites
© Copyright 1999-2009 LRR Technologies (Hyderabad), Pvt Ltd. All rights reserved. fullhyd, fullhyderabad, Welcome To The Neighbourhood are trademarks of LRR Technologies (Hyderabad) Pvt Ltd. The textual, graphic, audio and audiovisual material in this site is protected by copyright law. You may not copy, distribute, or use this material except as necessary for your personal, non-commercial use. Any trademarks are the properties of their respective owners. More on Hyderabad, India. Jobs in Hyderabad.