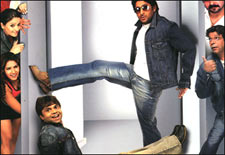 Jaiwantika Dutta-Dhupkar / fullhyd.com
EDITOR RATING
3.0
Performances
Script
Music/Soundtrack
Visuals
7.0
3.0
5.0
4.0
Suggestions
Can watch again
No
Good for kids
No
Good for dates
No
Wait to rent it
Yes
Ek Se Bure Do is actually a treasure-hunt in obvious disguise. And despite its meagre budget, it insists on rewarding seekers even for finding clues to its jokes, so you do have to appreciate the filmmaker's magnanimity. Only, sometimes the only thing standing between you and a complete entertainment blackout is the magnanimity of a bad movie. Yes, there's a strike on, so let's keep the barbs at bay and see the glass as half-full.

Actually, the narrative of Ek Se Bure Do is promising enough. Titu (Arshad Warsi) and Tony (Rajpal Yadav), two small-time criminals, are hired by a don (Govind Namdeo) to steal an ancient map which leads to a treasure. The two, however, make a duplicate map, give it to the don, and set out to find the treasure themselves. Good enough start.

While they discover that the treasure lies beneath the house of Vikramaditya (Govind Namdeo again), uncle to two pretty girls Payal (Anita) and Gehna (Tusha), the don gets lost in a remote jungle, and finds himself at the mercy of a dacoit (Virendra Saxena) and his own old rival (Yashpal Sharma), who want a share of the profits which don't seem to be in sight.

While the three discover they have been tricked by Titu and Tony, the two are busy making inroads into the girls' hearts and homes as their new paying guests, a task made easier with their devout uncle being on a pilgrimage. Until, that is, the don and his newfound friends discover that the former looks exactly like the girls' uncle, and plot to plant him as the uncle. Who finally gets the treasure and how?

And so the tango begins. Their jokes. Your logic. No fear, you're leading. And you will be, for the rest of the film. And you can pick up your brownie points in between, before you claim the grand prize, too.

What brownie points, you say? Let's begin with the supporting cast of Govind Namdeo, Yashpal Sharma, Virendra Saxena, Vijay Raaz and Razzak Khan, whose theatre-honed talent survives awful dialogue and shoddy scriptwork. Govind Namdeo in a double role is exhilarating as the lily-livered don and as the authoritarian, religious patriarch. Yashpal Sharma as the don's rival puts in a formidable performance, while Virendra Saxena as a fearsome dacoit is pretty impressive. Vijay Raaz as a Hyderabadi conman revels in the sort of role he specializes in, while Razzak Khan is expressive as usual.

The performances are in general the highlight. Arshad Warsi as Titu plays the street-smart playboy to the hilt in the film, a carry-over from his Tere Mere Sapne image, that seems to have got permanently stuck onto him. Nevertheless, he puts in a decent performance, and even begins to look appealing at some points in the film - or maybe that is because he constantly has the hyper-active Rajpal Yadav for company. The heroines, Payal (Anita) and Gehna (Tusha), try to do as much as possible with their well-chiseled roles, but their impact dims in the tirade of male talent.

That, however, is the emaciated good news. What hurts this one most is the writing. The scripting often feels like a bunch of torn pleats, trailing in the dirt and almost impossible to gather together. It's loose and shoddy, and strung together with bad, clichÃ©d jokes. The archaic dialogue doesn't help, either. The climax of the film is the pen-ultimate let down, a literal catastrophe. And visually, the movie doesn't even pass muster, with the cinematography looking like one of the dacoits decided to have some fun with a lower-end handycam.

What save Ek Se Bure Do, 5 years in the cans and looking every bit of it, are the performances and a couple of weird stunts that keep the audiences hooked, if only to see what could possibly come up next. And while the viewer sitting next to me was sure the film won't work, the guy at the ticket counter averred it would - for desperate movie-goers caught in a multiplex-producer stand-off, a solitary new release would be manna.

Yes, for a low-budget, highly gimmicky film that didn't even promote itself right, but is releasing with zero competition, everything seems unpredictable. Watch it if you must be at the movies this Friday.
Share. Save. Connect.
Tweet
EK SE BURE DO SNAPSHOT

ADVERTISEMENT
This page was tagged for
Ek Se Bure Do hindi movie
Ek Se Bure Do reviews
release date
Arshad Warsi, Natassha
theatres list
Follow @fullhyderabad
Follow fullhyd.com on
About Hyderabad
The Hyderabad Community
Improve fullhyd.com
More
Our Other Local Guides
Our other sites
© Copyright 1999-2009 LRR Technologies (Hyderabad), Pvt Ltd. All rights reserved. fullhyd, fullhyderabad, Welcome To The Neighbourhood are trademarks of LRR Technologies (Hyderabad) Pvt Ltd. The textual, graphic, audio and audiovisual material in this site is protected by copyright law. You may not copy, distribute, or use this material except as necessary for your personal, non-commercial use. Any trademarks are the properties of their respective owners. More on Hyderabad, India. Jobs in Hyderabad.