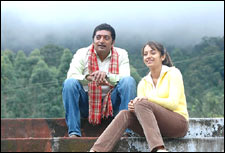 Deepa Garimella / fullhyd.com
EDITOR RATING
5.5
Performances
Script
Music/Soundtrack
Visuals
7.5
5.5
6.0
4.5
Suggestions
Can watch again
No
Good for kids
Yes
Good for dates
Yes
Wait to rent it
Yes
Aakasamantha is a warmly comical slice-of-life account of a father's 'growing-up pangs'. It is a simple reminder of that everyday fact - no one makes dads go week-kneed like daughters do. It is set in a hill-station world, a world of scenic tea estates, ubiquitous sweaters and pretty lakes lit up by moonlight, but one that nevertheless shares the mortal world's woes of children's schooling, higher education and love lives.

Aakasamantha is a park bench narrative of a father's relationship with his daughter. Raghu (Prakash Raj) watches a tired young father (Jagapathi Babu, in a special appearance) at play with his toddler, and reminisces on how he watched as his own sprightly, twinkly daughter, Abhi (who grows up to be Trisha), well, grew up.

Caught between wonder and worry, Raghu is whipsawed at every major step in Abhi's life - her first bicycle ride, her first day at school, admission to college miles away from home, and the biggest of all blows, the day she brings home the person she intends to marry. As Abhi grows wings, Raghu finds it tough to let go, and he has his crushing moments when he is told, "Dad, I know what I'm doing." He grudgingly gives in every time, but where mom (Aishwarya) sees reason, the well-meaning dad sees heartbreak.

Aakasamantha is a mild film. It is a story which touches you, but not overly so. The film gets predictable, in terms of setting its audiences up for the next emotion that is coming up - in any case, this is not a 'plot-centric' film. Towards the interval, there is an interesting twist which serves to add meat to the proceedings, but it degrades into an only-too-obvious resolution of the father-daughter issue.

The film's most stirring moments involve the family help, Ravi Shastri, a former beggar who the pure-hearted little Abhi brings home so he can be well-fed. With no one to call his own, Ravi Shastri refers to Abhi as his amma, no less, and whenever the film chooses to focus on this beautifully crafted emotion, you had better have your tissues ready.

Prakash Raj is brilliant as the anxious and awkwardly protective father. Raj's character has an endearingly comic touch to it, which is an extension of his on-screen persona of the dad who is only too human when it comes to offspring, and who is not afraid to admit it. The film is all about him, and he doesn't disappoint, what with his spontaneity and his comic timing.

Trisha enters as the grown-up Abhi a quarter of the film later, and save for her first few minutes (in which we discover that no actress, not even Trisha, can carry off the 'school-girl' look without appearing 10 years older than she really is), she is a natural. The rest of the performances are sound, too.

The film is rendered slightly frumpy owing to the dull photography, and is cranked up only by the fact that it is set entirely in a hill-station. The music is not exactly commercial material, but it has an offbeat folksy feel to it, and Kailash Kher packs a punch with Okanoka Voorilo.

It won't hurt to wait to rent this one, but if you do watch it right away, it isn't a worthless time at the movies.
Share. Save. Connect.
Tweet
AAKASAMANTHA SNAPSHOT

I waited a lot to watch this movie and it didnot satisfy me.
No logics for some scenes. Trisha is not necessary for this movie. Any actress can do this. She has very dialogues to say... like "I know what I am doing".. she donot have respect for her father...

She brings somebody to marry... and she donot even wait for her father's acceptance or opinion... she just says.. marriage is fixed on this date papa...

Funny movie.. for me atleast... only first half is good.. second half is average...


RATING
6
cymkhat on 18th Apr 2009, 1:55pm | Permalink
awesome movie. Perfect movie for its own class. prakash raj and aishwarya are excellent in their roles. 2 songs are really good. The film potrays realistic sentiment. No typical phaltu telugu cinema sentiments, no loud dialogues, no love at first sights, no crushing people in half with hunting swords. very sweet, simple, clean and a great movie. Can watch it with anyone, But, if you can, watch it with parents.

ADVERTISEMENT
This page was tagged for
akashamantha movie review
aakasamantha wale world Sab likhne wala dekhne wala nahi
Aakasamantha telugu movie
Aakasamantha reviews
release date
Follow @fullhyderabad
Follow fullhyd.com on
About Hyderabad
The Hyderabad Community
Improve fullhyd.com
More
Our Other Local Guides
Our other sites
© Copyright 1999-2009 LRR Technologies (Hyderabad), Pvt Ltd. All rights reserved. fullhyd, fullhyderabad, Welcome To The Neighbourhood are trademarks of LRR Technologies (Hyderabad) Pvt Ltd. The textual, graphic, audio and audiovisual material in this site is protected by copyright law. You may not copy, distribute, or use this material except as necessary for your personal, non-commercial use. Any trademarks are the properties of their respective owners. More on Hyderabad, India. Jobs in Hyderabad.