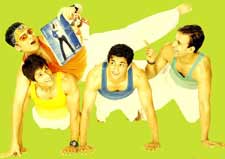 That's precisely the question you'd like to ask Hansal Mehta, the director. The publicity department though has got it right by promoting this one as a 'strictly youth film', since even the slightly older generation would without a doubt be appalled by this coarse comedy. Indeed, if you have any plans of watching this film with amma, naanna, cheeku and the rest of the family tree, drop them right now!

Bunty, Ranjit, Rahul and Johnny are pals who are thick as thieves, and despite being in the final year of college, their planning for the future extends only up to how best to woo girls by the evening. Even this flash of inspiration is a direct outcome of being barred from entering discs meant for "couples only". 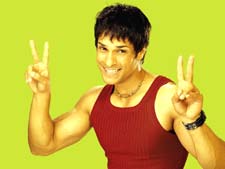 Bunty, the tubby 'leader' of the group, is the one most obsessed with the three letter word, and this can be traced to the fact that his father is a sexologist who, instead of giving him sane advice, eggs him on to do 'it'. Ranjit is the captain of a mysterious volleyball team that is never seen playing, and has a girlfriend in the 'hot' Esha. Only, she is with him only to break his heart, since that way she will win a bet, a silver Merc, from her ex-boyfriend (now just why are my sympathies suspended?). Ranjit also has a faithful friend and admirer in Anu, a "simple girl" who applies enough makeup to support the Indian cosmetic industry.

Rahul is the only one among the four who has a girlfriend at the very beginning, but stays faithful to the gang by never quite succeeding even in holding her hand in a theater. Johnny, as the melancholy hero, falls for the slightly older, ruffled-hair Stella, who looks more like a fashion designer than a college professor. 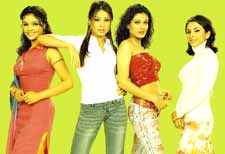 With such characters the director could actually have made the film more pacy and interesting, yet so much emphasis is given to the male obsession with you-know-what that after a while it no longer seems funny, even to the guys. Right at the opening, the film has the four

Also, the film has been set in never-never land, where one moment you find the guys rollicking by the beach and in the very next atop a mountain. There is none to beat the Bollywood sense of time and space. And the climax leaves you gaping at the combined and collective idiocy of the crew. 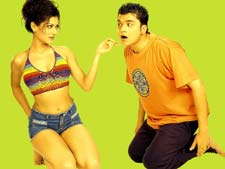 The only nice thing about the film is when Rahul's conservative yet pleasant girlfriend Preeti says she's "ready" more since he wants to do 'it' so badly, and he refuses saying that true love knows how to wait. That's perhaps the most sensible advice the makers of the film give, considering it's targeted at the youth.

The film is basically about well-picturized scenes strung together with a vague storyline inserted to fill in the gaps. But the Shankar-Ehsaan-Loy trio manages once again to come up with foot-tapping and excellently packaged numbers. The picturization and locales are breathtakingly beautiful.

ADVERTISEMENT
This page was tagged for
YAMUDU TUbby
Yeh Kya Ho Raha Hai? hindi movie
Yeh Kya Ho Raha Hai? reviews
release date
Vaibhav Jhalani, Yash Pandit
Follow @fullhyderabad
Follow fullhyd.com on
About Hyderabad
The Hyderabad Community
Improve fullhyd.com
More
Our Other Local Guides
Our other sites
© Copyright 1999-2009 LRR Technologies (Hyderabad), Pvt Ltd. All rights reserved. fullhyd, fullhyderabad, Welcome To The Neighbourhood are trademarks of LRR Technologies (Hyderabad) Pvt Ltd. The textual, graphic, audio and audiovisual material in this site is protected by copyright law. You may not copy, distribute, or use this material except as necessary for your personal, non-commercial use. Any trademarks are the properties of their respective owners. More on Hyderabad, India. Jobs in Hyderabad.