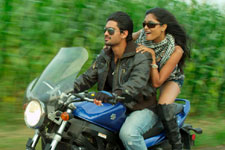 Deepa Garimella / fullhyd.com
EDITOR RATING
2.0
Performances
Script
Music/Soundtrack
Visuals
5.0
2.0
6.5
4.0
Suggestions
Can watch again
No
Good for kids
No
Good for dates
No
Wait to rent it
No
Chinna Cinema is like a grain of sand in your shoe. It's annoying, you don't know how it got there, and if you're putting up with it for more than five minutes, it makes you expand your vocabulary.

Chinna Cinema is a strange movie that seems like two films made by different persons with different IQs were stitched together by one very clueless person, and then bundled up in an oversized gunny sack. Overall, it looks like something you'd call the cops on if you see it in a movie hall, all abandoned.

We are first introduced to an aspiring movie director (RJ Ghajini), who is narrating a plot to a producer (Prithvi) and a movie critic (Vennela Kishore). The director starts his story. The critic keeps telling him that it's lousy. Unshaken, the director continues to squish the hell out of everyone's senses with his "chinna cinema" narration.

The "chinna cinema" is centred around Ramu (Arjun Kalyan), who goes to the US to make lots of money. How he plans to do this by working in a convenience store full-time, we have no idea. Nor do we know how anyone let him into the US in the first place. What we do know is that he has absolutely no redeeming features, and yet he manages to land a hot babe (played by Sumona Chanda and her red lipstick).

Ramu has a mixture of friends, aged 25 to 70, each of which makes the next one seem like Stephen Hawking on brain dope. Ramu also has a couple of irritating adversaries - the grocery store's owner and his sidekick.

When the film is not boring you to death with these people's antics in the US of A, it tries to tell you another story - one that is incongruously meaningful. This one is a flashback explaining why Ramu has to earn money in the first place. It involves a Ramalayam and a corrupt local politician, and stars M Balayya, L B Sriram and Surya. Some things about this flashback are surprisingly good - for instance, there's a montage (with a set of hand-drawn illustrations) profoundly talking about how freebies bring society to ruin.

"But why make sense?" thought the makers, evidently. Anxious to neutralize anything good going for the movie, they keep shifting us back to the buffoonery in the US, where Ramu's boss is now trying to get him killed.

Chinna Cinema is an amateur effort. Except for the parts that involve Balayya and gang, the film is a lousy product made by people who don't know how to act or write. Its different sub-plots are disjointed. Most of it doesn't make sense. And the "comedy" is quite sad, except for Vennela Kishore's quips.

The younger actors - all of them new faces - are on a trip of their own. All of them are uniformly painful to watch. The hero and the heroine seem to have a little more spunk than the others, though. Balayya, L B Sriram and Surya are the only ones who lend a semblance of any meaning into all this. Meanwhile, the makers even manage to rope in Taagubothu Ramesh, who has nothing to do.

The music springs a surprise, too. A couple of songs, including one sung by SP, are melodious. The visuals look like the film has been shot on a mobile phone.

Someone made a big drunken mistake by releasing Chinna Cinema. There's no reason you should either.
Share. Save. Connect.
Tweet
CHINNA CINEMA SNAPSHOT 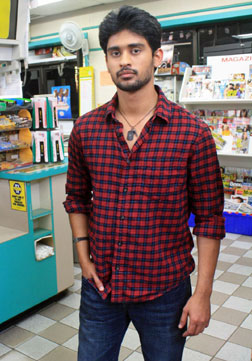 ADVERTISEMENT
This page was tagged for
Chinna Cinema telugu movie
Chinna Cinema reviews
release date
Arjun Kalyan, Sumona Chanda
theatres list
Follow @fullhyderabad
Follow fullhyd.com on
About Hyderabad
The Hyderabad Community
Improve fullhyd.com
More
Our Other Local Guides
Our other sites
© Copyright 1999-2009 LRR Technologies (Hyderabad), Pvt Ltd. All rights reserved. fullhyd, fullhyderabad, Welcome To The Neighbourhood are trademarks of LRR Technologies (Hyderabad) Pvt Ltd. The textual, graphic, audio and audiovisual material in this site is protected by copyright law. You may not copy, distribute, or use this material except as necessary for your personal, non-commercial use. Any trademarks are the properties of their respective owners. More on Hyderabad, India. Jobs in Hyderabad.