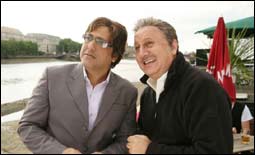 Kalyani Krishna / fullhyd.com
EDITOR RATING
1.0
Performances
Script
Music/Soundtrack
Visuals
7.0
2.0
4.0
4.0
Suggestions
Can watch again
No
Good for kids
No
Good for dates
No
Wait to rent it
No
There was a time when crassness and vulgarity (the sarkai lo khatiya type), looked down upon by the classes, and cheered on by the masses, raked in the moolah at the BO. That gave way to the atrocious brazenness on display now, presumably to cater to an era in which 10-year-olds cry foul if they're not being taught to gyrate to Sheila Ki Jawaani and Munni in their dance classes.

Naughty At 40 seems awkwardly stuck between the two phases. Aiming at being a sex comedy - and nowhere near crowd-pullers like No Entry in terms of comic content or production values - and incapable of executing a single joke, the movie is the worst that Govinda has ever acted in. It's tragic, really.

Govinda stars as Happy Singh, a twisted version of his Bhaskar in Partner. Happy Singh, from London, is 40, the son of a rich businessman (Anupam Kher) and successful but, horror of horrors, a virgin. His repressed desires sprout up when he walks in his sleep and heads to strip clubs or feels up strange women.

Distressed at Happy's single-dom, his parents get him married to Gauri (Uvika Chaudhary), an airheaded small-town girl from India who doesn't know about the birds and the bees, and has no clue why men and women marry.

After his wedding, thanks to his sex-starved marriage, he sleeps with a London model who later kindly tells him that her relationship with him was "fun" and that he should take all the love lessons she taught him, and go and teach them to his wife.

This jokes, some delivered by the matchless Shakti Kapoor and Harish, are about as funny as a burning orphanage. There's a condom joke that is totally unexplored, but that could have added some action to the proceedings.

Govinda looks tired, and his trademark dialogue delivery and comic timing look like a truck ran over them. Uvika Chaudhary acts as silly as her character is written to be. The entire cast does an okay job in what is an atrociously lame script plagued by bad jokes.

For those who care, the cinematography is below average, and so is the music.

ADVERTISEMENT
This page was tagged for
Naughty At 40 hindi movie
Naughty At 40 reviews
release date
Govinda, Uvika Chaudhry
theatres list
Follow @fullhyderabad
Follow fullhyd.com on
About Hyderabad
The Hyderabad Community
Improve fullhyd.com
More
Our Other Local Guides
Our other sites
© Copyright 1999-2009 LRR Technologies (Hyderabad), Pvt Ltd. All rights reserved. fullhyd, fullhyderabad, Welcome To The Neighbourhood are trademarks of LRR Technologies (Hyderabad) Pvt Ltd. The textual, graphic, audio and audiovisual material in this site is protected by copyright law. You may not copy, distribute, or use this material except as necessary for your personal, non-commercial use. Any trademarks are the properties of their respective owners. More on Hyderabad, India. Jobs in Hyderabad.