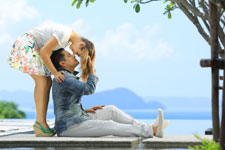 Swaroop Thotada / fullhyd.com
EDITOR RATING
4.0
Performances
Script
Music/Soundtrack
Visuals
6.0
4.0
5.0
6.0
Suggestions
Can watch again
No
Good for kids
No
Good for dates
No
Wait to rent it
Yes
Inkokkadu starts with a premise promising enough to build a taut thriller upon, but forgets midway that a thriller should actually thrill. The movie gets its basic ingredients right. A world-weary, cocky and seemingly cold cop (a RAW agent actually) with a haunting past, an egomaniacal super-villain threatening world peace, a gun-wielding curvy heroine with a penchant for titillating outfits, and extras walking hither and thither in control rooms with giant monitors.

But while we buckle up to see these being toss-juggled, the movie just throws them in the air and they all just drop to the ground making deafening noises.

Inkokkadu starts with an attack on the Indian embassy in Malaysia, an attack that is later found to have been masterminded by a former arch-criminal called Love, who was believed to have died long ago. Ayushi (Nitya Menon) and Malik (Nasser) from RAW decide to bring in Akhil (Vikram), a former agent who lost his wife Meera (Nayanatara) in his fight with Love and ever since slid into obscurity. The team lands in Malaysia and is led by a string of clues into the dark criminal underbelly of the country, where they hope to find Love.

Love (also played by Vikram) concocts a chemical weapon code-named "Speed" that turns even the puniest of humans to a killing machine, by pumping up the adrenaline levels in the body for an unnaturally extended time. We are told that the last man to put that drug to good use was none other than Hitler, and the movie dedicates a good five minutes of its time explaining the effects and side-effects of the drug. Love doesn't plan anything short of world destruction with this new bio-weapon, and now it is upon the able shoulders of Akhil to save the world.

The first hour of the film that is spent in search of the invisible and invincible villain masterfully pulling the strings from behind the curtains, sets a great stage for him to appear. But when he finally does, all he does is talk. Correction - he talks and talks and talks. So much that we wonder why he needs all his fancy weaponry when he can just bore people to death with his endless talking.

Vikram plays Love as an eccentric, quirky and possibly insane genius, but these traits are ends in themselves, as the movie doesn't give the character a back-story that explains his motivations, nor does it refrain from taking itself seriously. What we get then, instead of a nail-biting battle of wits, is a cockeyed and extremely contrived series of events that cripple the viewer's interest in the proceedings and lay bare the creative bankruptcy in writing.

Inkokkadu shoots itself in the foot by lazily throwing itself on the shenanigans of the Love character and innocently expecting them to bear the weight. The director clearly has a "Joker" hangover, and Vikram, in his gleeful fascination with this character's antics, doesn't seem to mind the fact that it's actually a poorly conceived caricature. We might not have bothered about character development so much had the movie stuck to its guns and delivered on its promise of an intriguing cat and mouse game that it baited us with. It doesn't.

For a movie that hinges its entire plot on its villain, Inkokkadu suffers from poor writing of this central character, who not only brings the entire movie down with him, but also dances on the debris.

Neither the forgettable songs, nor the reasonably good cinematography have the power to redeem this film from the sheer mediocrity and unforgivable laziness in writing. And the other performances suffer from the same half-baked characterisations and the ludicrous screenplay.

En fin, Inkokkadu finally amounts to nothing more than "inkokkati" in the long list of duds that Vikram has been coming up with.
Share. Save. Connect.
Tweet
INKOKKADU SNAPSHOT 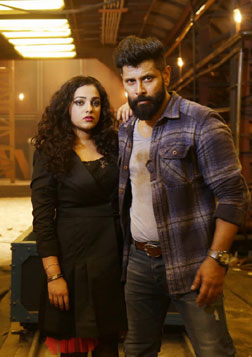 ADVERTISEMENT
This page was tagged for
inkokkadu telugu movie
inkokkadu telugu full movie
inkokkadu movies
inkokkadu Telugu dubbing movie
inkokkadu Telugu movie
Follow @fullhyderabad
Follow fullhyd.com on
About Hyderabad
The Hyderabad Community
Improve fullhyd.com
More
Our Other Local Guides
Our other sites
© Copyright 1999-2009 LRR Technologies (Hyderabad), Pvt Ltd. All rights reserved. fullhyd, fullhyderabad, Welcome To The Neighbourhood are trademarks of LRR Technologies (Hyderabad) Pvt Ltd. The textual, graphic, audio and audiovisual material in this site is protected by copyright law. You may not copy, distribute, or use this material except as necessary for your personal, non-commercial use. Any trademarks are the properties of their respective owners. More on Hyderabad, India. Jobs in Hyderabad.