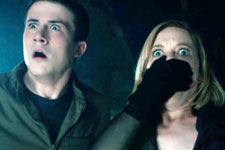 Jaiwantika Dutta-Dhupkar / fullhyd.com
EDITOR RATING
4.0
Performances
Script
Music/Soundtrack
Visuals
2.0
2.0
4.0
3.0
Suggestions
Can watch again
No
Good for kids
No
Good for dates
No
Wait for OTT
Yes
Every now and then comes a film that makes you marvel at the sheer inanity of its plot. An unabashed member of that group, Don't Breathe regurgitates junk from a bunch of old slasher and horror flicks and spits it right out at the audience in the most obnoxious fashion.

The story of three young people locked up in an old dilapidated house with a killer on the loose has been handled far better by other films in the same genre (House Of Wax, Sorority Row, Silence Of the Lambs) but Don't Breathe is just not up to the task. There aren't enough scares, there aren't enough thrills, the film is amazingly predictable, and the climax is downright ridiculous.

The movie has nothing nice to say about anybody, so we're told right at the start that our three leads Rocky, Alex and Money (Jane Levy, Stephen Minette and Daniel Zovato respectively) are social deviants who rob for a living. We're given some background about how they all want to escape the ongoing drudgery in their personal lives and how the potential of a big heist at the dilapidated house of a blind army veteran Normon Nordstrom (Stephen Lang) makes them break into his house.

The old veteran turns out to be a rotten egg as well, and he gets more rotten as the film progresses. Rushing blindly around his house with his head cocked to one side, sniffing madly for the intruders, he stalks the three with a vengeance blindly firing his revolver at them all the while. Eventually, the film falters to level Disgusting as he graduates to making an attempt to artificially inseminate Rocky while she's suspended from the ceiling. Now slasher/thriller films aren't expected to be great works of cinematic brilliance anyway, but this one truly touches a new low.

At one point, the intruders discover a sex slave (Jane Graves) in the basement. They discover she's a rich brat who ran over the veteran's daughter and actually got away scotfree in court. When she gets shot in a messy escape attempt gone awry, the intruders discover she is pregnant with the man's child. There are some sneaky references to resurrection and rebirth, and the film tends to assume that all women are one - the veteran's wife (mother to his beloved daughter), the poor sex slave and the tormented thief have identities that merge into one another because the makers want to paint all women with the same brush.

That the makers identify personally with the old tyrant is abundantly clear; he's clearly the hero of this film for them. His character is shown to be so deeply attached to bonds of family that he'd even compromise his morality to avenge a threat to it. Despite it all, he still comes across as not only emotionally deranged but psychotic as well. It's difficult to believe that somebody who stalked and shot down two young people - and tried to artificially inseminate the third - is the sort around whom young people would be safe, despite all the ballyhoo about his poor dead daughter.

Not once during the entire ordeal do the three youth call the police. They have their phones up and ready for all manner of things during the film, but not once does a single phone dial 911. You'd think it's perhaps because they're robbers themselves, but it seems our protagonists have a tough time deciding between dying a grisly death and spending time in prison for attempted theft.

As the film staggers from boring to absolutely unbearable, the audience wishes the dead girl, the reason for all this brouhaha, would just rise from the grave or an old photograph and save this film. Don't Breathe would have been great if it had the old psycho plus a ghost, maybe a few skin-crawling elements here and there, and an interesting narrative. This one only has the old veteran shooting away to glory, and it tries to pretend like there's a method to the madness.

Don't Breathe also suffers from a serious shortage of supporting actors. Since the entire drama is staged in a single house, the film makes do with just four people for the major part. The movie feels like a hurricane video, shot in a ten-day schedule on a single location with a bunch of obscure actors. While having supporting actors would not necessarily make this a better film, fleshing out roles for them would certainly add body to the otherwise bleak narrative.

The performances in the film are mediocre. Nobody went into the theatre expecting brilliant acting chops, but this film has a bunch of dismal acts, all at one place. The actors don't even shriek, scream or cry properly, and since that's really the only thing they were expected to do in the film (other than die properly - they fail there, too), they could at least have rehearsed a bit.

The cinematography is just about okay - there are some scenes which would have been better had they been shot in close-up, but they're shot in mid-shot and the audience doesn't feel involved. The bad actors only make things worse. There is an agonizing scene which lasts almost five minutes in which the actors fumble around in a dark storeroom. Sorry, didn't get the point. At some times in the film, you notice lens changes for no particular reason, and it seems weird even in a movie of this sort.

A lot of things about the movie are whimsical and arbitrary, as if the makers were just concerned with getting the job over with as soon as possible. Because the old psycho's house is such a dump, the camera has the opportunity to take all these crazy high and low angle shots; so we're given perspective shots from windows, ventilators, over fences, you name it. There are several shots which the camera spends groveling about at floor-level as well, and you wonder if this could've been done differently, or how that cinematographic decision contributed to the narrative at all.

The editing (Eric L Beason, Louise Ford) is slack, and the film sags in several places. There isn't much to edit anyway, with the same rubbish repeating itself all through the film. If they edited that, Don't Breathe would be 15 minutes long at most. The background score (Roque Banos) keeps the film going. Fede Alvarez's direction falters, and the film is a disappointment after his 2013 debut Evil Dead.

Don't Breathe is skippable in more ways than one. Do yourself a favour and skip it.
Share. Save. Connect.
Tweet
DON'T BREATHE SNAPSHOT 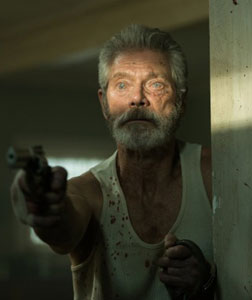 See Don't Breathe full details
DON'T BREATHE USER REVIEWS
1 - 3 OF 3 COMMENTS
POSITIVE  |  NEGATIVE |  NEWEST  |  OLDEST  |  MOST HELPFUL  |  LEAST HELPFUL
USER RATING
6.0
1 USER
Performances
Script
Music/Soundtrack
Visuals
NA
NA
NA
NA
Can watch again - NA
Good for kids - NA
Good for dates - NA
Wait for OTT - NA
Booyakasha on 20th Oct 2016, 10:57am | Permalink
Don
RATING
6
akash on 13th Sep 2016, 8:43pm | Permalink
Wow really jaiwantika? Performances and script 2?
fullhyd needs to really review this reviewer and her future
Swaroop Totada on 6th Sep 2016, 10:32am | Permalink
Well, with all due respect I disagree with the reviewer. It didn't look like the makers are sympathizing or identifying with the villain character. He is shown as the psychopath he is. And I never thought a feminist PC lens can be brought here, and it was. Oh my!
While I agree that the characters are uninteresting, the film doesn't fool itself by pretending it is about it's characters either. The gore should have been more tongue-in-cheek, as it felt out of place in contrivances in the end that made the cinematic liberties all the more glaringly visible.
I thought about John Goodman's the brilliant 10 Cloverfield lane that came this year, and other similar movies like Panic Room.
I watched it in a packed house and people enjoyed the ride, and the box office seems to agree with us as well :)
LEAVE A COMMENT
fullhyd.com has 700,000+ monthly visits. Tell Hyderabad what you feel about Don't Breathe!
MORE MOVIES
Latest Reviews
The Ghost
Godfather
Don't Worry Darling
Vikram Vedha
Ponniyin Selvan - 1
more
Naane Varuvean
Nene Vasthunna
Krishna Vrinda Vihari
Saakini Daakini
Where the Crawdads Sing
Everything Everywhere All At...
Aa Ammayi Gurinchi Meeku Che...
Brahmastra: Part One - Shiva
Oke Oka Jeevitham
Brahmastra: Part One - Shiva
Contemporary Reviews
Inkokkadu
Badmash Pottey
Sully
Freaky Ali
Jyo Achyutananda
more
Baar Baar Dekho
Robinson Crusoe
Akira
Janatha Garage
Mechanic Resurrection
A Flying Jatt
Happy Bhag Jayegi
Ben-Hur
Chuttalabbayi
Random Reviews
Pellam Vachchindi
Ammayi Kosam
Kaash Aap Hamare Hote
The Day After Tomorrow
Soggaadu
more
Jawani Diwani
Shrek The Third
Underworld - Rise Of The Lyc...
Tum Milo Toh Sahi
Kung Fu Panda 2
Jannat 2
Iddarammayilatho
Star Wars: The Last Jedi
The Lion King
Liger
SEARCH MOVIES
Dissatisfied with the results? Report a problem or error, or add a listing.
ADVERTISEMENT
SHOUTBOX!
{{todo.name}}
{{todo.date}}
[
ip{{todo.ip}}
]
{{ todo.summary }}... expand »
{{ todo.text }} « collapse
First  |  Prev  |   1   2  3  {{current_page-1}}  {{current_page}}  {{current_page+1}}  {{last_page-2}}  {{last_page-1}}  {{last_page}}   |  Next  |  Last
{{todos[0].name}}

ADVERTISEMENT
This page was tagged for
Don't Breathe english movie
Don't Breathe reviews
release date
Jane Levy, Stephen Minette
theatres list
Follow @fullhyderabad
Follow fullhyd.com on
About Hyderabad
The Hyderabad Community
Improve fullhyd.com
More
Our Other Local Guides
Our other sites
© Copyright 1999-2009 LRR Technologies (Hyderabad), Pvt Ltd. All rights reserved. fullhyd, fullhyderabad, Welcome To The Neighbourhood are trademarks of LRR Technologies (Hyderabad) Pvt Ltd. The textual, graphic, audio and audiovisual material in this site is protected by copyright law. You may not copy, distribute, or use this material except as necessary for your personal, non-commercial use. Any trademarks are the properties of their respective owners. More on Hyderabad, India. Jobs in Hyderabad.