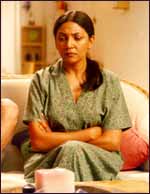 Something and all happens and the movie eventually ends. This flick was made by an ad agency - you know, those kinds who feel the need to show that they are creative through long hair, unshaven faces, nicotine-stained teeth, smoke-stenched breath, gruffy voices and loads of attitoooooode, but whose interpretation of creativity is anything that is random, vague and generally arbitrary, so that they can morph their incompetence into your unsophistication. For instance, we are shortly bringing out the first volume of our explanation of why this movie is called Freaky Chakra. What you need, honey, is image management technique! And a sucker to fund your BS. Ask me, hyuk!
Share. Save. Connect.
Tweet
FREAKY CHAKRA SNAPSHOT
See Freaky Chakra full details
FREAKY CHAKRA USER REVIEWS
1 - 6 OF 6 COMMENTS
POSITIVE  |  NEGATIVE |  NEWEST  |  OLDEST  |  MOST HELPFUL  |  LEAST HELPFUL
USER RATING
6.1
53 USERS
Performances
Script
Music/Soundtrack
Visuals
NA
NA
NA
NA
Can watch again - NA
Good for kids - NA
Good for dates - NA
Wait for OTT - NA
Hemant Mandal on 22nd Jan 2023, 11:33pm | Permalink
any one tell me how to watch this movie? and suggest link
Subhadeep on 1st Jun 2021, 1:07am | Permalink
I want to see the movie as I can't find it anywhere on internet.
Venu on 7th Dec 2007, 2:28pm | Permalink
naval's perfomance excellent.

ADVERTISEMENT
This page was tagged for
Freaky chakra 2003 online movies
Freaky Chakra (2003 Full movie)
english freaky chakra movie
freaky chakra movie in hindi
freaky chakra full movie
Follow @fullhyderabad
Follow fullhyd.com on
About Hyderabad
The Hyderabad Community
Improve fullhyd.com
More
Our Other Local Guides
Our other sites
© Copyright 1999-2009 LRR Technologies (Hyderabad), Pvt Ltd. All rights reserved. fullhyd, fullhyderabad, Welcome To The Neighbourhood are trademarks of LRR Technologies (Hyderabad) Pvt Ltd. The textual, graphic, audio and audiovisual material in this site is protected by copyright law. You may not copy, distribute, or use this material except as necessary for your personal, non-commercial use. Any trademarks are the properties of their respective owners. More on Hyderabad, India. Jobs in Hyderabad.