Dhanalakshmi... I Love You! Review

Poverty can be amusing, as long as you are not at the receiving end. That's your reaction during the first half of this flick, when the three protagonists here struggle to eke out a living in their own ingenuous ways.

Poverty can be amusing, as long as you are at the receiving end. That's our revised reaction during the second half - when the same desperate-for-money souls walk away with the booty of Rs 10 lacs, again with their ingenuous ways.

But whether or not poverty is amusing, those at the receiving end of Dhanalaxmi...I Love You will definitely find the movie amusing. Not in a laugh-out-loud way, but in a light-hearted 'grin and chortle' way. If the movie does seem a bit jaded, blame it on Set Max, the channel which aired the original Hindi version Hera Pheri at least seven times the last six months. However, for those who watch only Telugu movies and are looking for something new, Dhanalaxmi... fits the bill.

Babu Rao (Naresh), Raju (Aryan Naresh) and Shyam (Aditya) have two things in common. That's their BPL (Below Poverty Line) status and their dreams of making it rich by any means. Then Dhanalaxmi (Ankita) too joins the club. Each one of them needs thousands to tide over their respective problems. While money seems hard to come by, what does seem to flood them is a sea of wrong calls on the telephone.

It's one of these calls on one fateful night that changes their lives. The gist of the call is that Kabira, a baddie, has kidnapped the grandchild of a business tycoon, and is demanding a huge ransom. The trio in the garage think on their feet, decide to play smart and make some money here. The plan is rather simple: Pretend to be the businessman with Kabira and promise him the money. Then pretend to be Kabira to the tycoon and demand Rs. 20 lacs as ransom. Give Rs. 10 lacs to Kabira, give the child to the tycoon, and in the process scoot with the money left. 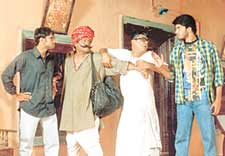 The first time around they goof up things royally when they get their timing wrong. But their desperation for money eggs them on to pursue the matter, and the second time they manage to walk off with the monies.

Newcomers Aryan Naresh and Aditya (with just about one and a half movies to their credit) fit perfectly into the 'desperately seeking dough' mould. Naresh (the actor of the 80s who has made a comeback with this one) too chips in with his bit as the eccentric, over-the-hill bachelor. He plays Paresh Rawal's role, and even looks like him in some frames. Ankita's role as Dhanalaxmi is more a red herring. Dhanalaxmi in the title is the goddess of money rather than this bespectacled girl, and the "I Love You" is her borderline love story with Shyam.

There are at least five songs shot in New Zealand or Malaysia or one of those places. These numbers don't do much except distract you from the dilapidated garage and the poverty-stricken house of the protagonists.

Now, do we really have to give the credit to the director, especially since he has two movies already as benchmarks? He does not meddle too much with the script and that's a blessing.

ADVERTISEMENT
This page was tagged for
????????? ? ??? ?? ???? ??????
????????? ? ??? ?? ???? ??????
????????? ? ??? ?? ???? ??????
Dhanalakshmi I love you
Dhanalakshmi... I Love You! telugu movie
Follow @fullhyderabad
Follow fullhyd.com on
About Hyderabad
The Hyderabad Community
Improve fullhyd.com
More
Our Other Local Guides
Our other sites
© Copyright 1999-2009 LRR Technologies (Hyderabad), Pvt Ltd. All rights reserved. fullhyd, fullhyderabad, Welcome To The Neighbourhood are trademarks of LRR Technologies (Hyderabad) Pvt Ltd. The textual, graphic, audio and audiovisual material in this site is protected by copyright law. You may not copy, distribute, or use this material except as necessary for your personal, non-commercial use. Any trademarks are the properties of their respective owners. More on Hyderabad, India. Jobs in Hyderabad.