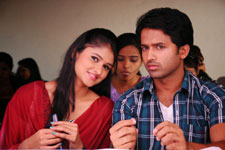 Ravi Kandala / fullhyd.com
EDITOR RATING
1.0
Performances
Script
Music/Soundtrack
Visuals
1.0
1.0
1.0
1.0
Suggestions
Can watch again
No
Good for kids
No
Good for dates
No
Wait to rent it
No
At the end of Gaallo Thelinattunde, you are struck by the aptness of the title in mirroring your feelings. For you want to float in the air after seeing this movie, too - after jumping off the tallest building nearby.

It is surprising how some directors can talk their producers into investing their hard-earned (or otherwise) money into films like this one. It is not hard to imagine Venkat Suresh Gunnam (the director of this abomination) narrating the story to the producers:

"This is a youthful love story with a strong message to the youth. But since the youth will not come to any message-oriented movie, we'll instead make a cheap and sleazy one for which I have an absolutely original plot!
"So we'll have three youngsters, no make that four since I have to fit my message in, add another orphan to the mix. We'll make them students so we can shoot songs in the college setting, create some cheap comedy with a couple of lecturer characters, and also finish the movie in a low budget - hiring an engineering college building is not too expensive these days!

"We'll then make them all sex-crazy and fill both halves of the movie with various attempts made by these characters to 'score'. We can include classmates, a few women in the neighbourhood and a trip to a prostitute for good measure. The heroes do all this while they have steady girlfriends who provide them with money and love. The orphan remains a loner, by the way - that way we can make do with three heroine-type girls instead of four.

"To end it all, we'll shoot a campus recruitment scene, forcibly introduce twists into the each of the love stories, resolve those twists in a minute, and unite the couples."

This must've lead to the tricky part with the producers asking about the message. And since there must've been no message in the first place, our man must've made up something on the spot. The message conveyed in this movie is, "If we can remove the button called sex from the life of youngsters between the ages of 15 and 25, they will all become super-successful. We can then re-introduce this at the age of 25, and everyone is happy." You think we are kidding? Well, then check the film out yourself.

Coming to the performances, they are all uniformly terrible. You can't identify who the leads are unless told. The boys have not much to do except drool over every single woman they see, while the girls are of either the "ogle at me" or the "Miss Goody Two Shoes" varieties. There is a big supporting cast including Sayaji Shinde, Raghu Babu, Krishna Bhagwan and Melkote, and each of them, we are sure, did not even know who else was in the movie.

The songs are shot like music videos - or at least like the cinematographer's idea of music videos, which involves putting a spotlight behind a bunch of dancing characters and dazzling the audiences' eyes. The rest of the technical values are not worth a mention.

This writer was visiting Sri Mayuri after a while - and the theatre seems to have hit the Holy Grail of cinematic experiences with this one. This one is a must watch if you're seekers of the Holy Grail, like us!
Share. Save. Connect.
Tweet
GALLO THELINATTUNDE SNAPSHOT 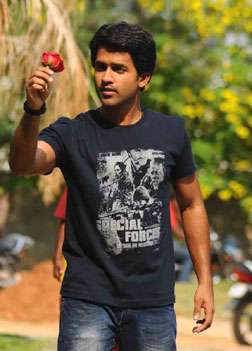 ADVERTISEMENT
This page was tagged for
Movies.telugu.org.gallo-telinattude
Telugu Gaalo Thelinattunde movie
Gallo Thelinattunde telugu movie
Gallo Thelinattunde reviews
release date
Follow @fullhyderabad
Follow fullhyd.com on
About Hyderabad
The Hyderabad Community
Improve fullhyd.com
More
Our Other Local Guides
Our other sites
© Copyright 1999-2009 LRR Technologies (Hyderabad), Pvt Ltd. All rights reserved. fullhyd, fullhyderabad, Welcome To The Neighbourhood are trademarks of LRR Technologies (Hyderabad) Pvt Ltd. The textual, graphic, audio and audiovisual material in this site is protected by copyright law. You may not copy, distribute, or use this material except as necessary for your personal, non-commercial use. Any trademarks are the properties of their respective owners. More on Hyderabad, India. Jobs in Hyderabad.