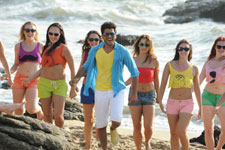 Ravi Kandala / fullhyd.com
EDITOR RATING
5.5
Performances
Script
Music/Soundtrack
Visuals
6.0
5.0
6.0
7.0
Suggestions
Can watch again
No
Good for kids
No
Good for dates
No
Wait to rent it
No
They say art is universal and that music has no boundaries, but more often than not, we tend to find something too Tamilian / Malayali for our tastes. Take the music of Run Raja Run for example - the songs sound funky and fun and are pretty nicely shot, but somewhere we kept thinking that the songs had a distinct Tamil flavour. Where, then, is the universality that we hear so often about?

The film, too, has different flavours - very Goan / Anglo-Indian in the first song and the first few shots, then distinctly Tamil-esque for a while, followed by a very Telugu ending. That the director of the film is famous in the short film world probably contributed to this - it is almost like a series of short films put together, each giving out a different vibe.

Run Raja Run is the story of Raja Harischandra Prasad (Sharwanand), a guy who breaks up with girls before you can finish drinking a Thums Up. One fine day, he meets up with Priya (Seerat Kaur), a girl who's never had any luck with her love stories. The two unfortunate souls team up and find love in each other.

The twist in the tale comes in when Priya's father, Police Commissioner Dilip Kumar (Sampath Raj), asks Raja to help him nab a gang of kidnappers. Raja responds by kidnapping Priya in an attempt to smoke out the gang. The subsequent cat-and-mouse game between Raja and Dilip leads to some (actually several) twists and turns, and a pretty foreseeable ending.

Run Raja Run bounces about in theme - from a pretty romantic comedy, it briefly shifts into Venkatesh territory (a sacrificing hero), and then morphs into a thriller with a vengeance angle. And the segues are not super smooth, so to say. Like we mentioned earlier, Sujeeth, the director, seems really good at making short films - the longer a thread goes on, the more he appears to lose focus. Some of the romantic parts in the movie jar big time with the rest of the flick.

What keeps Run Raja Run going is the fact that Sujeeth does not let the proceedings get heavy at any time. The film has a light tone with liberal doses of humour sprinkled in at regular intervals. The songs, though one too many, are pretty well shot, and make for decent viewing, too.

The actors do a fine job. Sharwanand gets into his role effortlessly and is fun to watch. His dialogue delivery is pretty different, and suits the character, too. Seerat Kaur is pretty good and displays some good moves in the songs. Sampath Raj, whom we've seen in some pretty serious roles so far, does one with a lighter side to it, and acquits himself pretty well. Kota and the other supporting actors do a fair job as well.

The film is glossily shot and the locations are pretty new. The whole feel is that of a technically sound film made within a limited budget, which again makes you root for it.

Run Raja Run has enough twists and turns to keep you engrossed enough for a one-time watch. A pretty decent effort by a debutant director.
Share. Save. Connect.
Tweet
RUN RAJA RUN SNAPSHOT 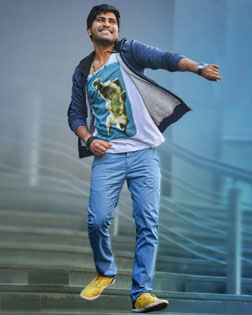 See Run Raja Run full details
RUN RAJA RUN USER REVIEWS
1 - 2 OF 2 COMMENTS
POSITIVE  |  NEGATIVE |  NEWEST  |  OLDEST  |  MOST HELPFUL  |  LEAST HELPFUL
USER RATING
8.0
2 USERS
Performances
Script
Music/Soundtrack
Visuals
NA
NA
NA
NA
Can watch again - NA
Good for kids - NA
Good for dates - NA
Wait to rent it - NA
Adithya on 19th Sep 2014, 7:33am | Permalink
The plot features Sharwanand as a heart-broken youngster who always aims to find the right girl but breaks up after a while due to things not working out. After splitting from lots of girls, he meets and deeply falls in love with Priya.

Only, Priya is the daughter of the villian (an ACP). People think that he is an honest cop, but the plot shows a grey side to him. The ACP knows that the hero is in love with his daughter, and so sets a trap for him, and the rest of the movie is about how the hero escapes from that trap.

ADVERTISEMENT
This page was tagged for
run raja run movie kickass
run raja run telugu movie123
Run Raja Run telugu movie
Run Raja Run reviews
release date
Follow @fullhyderabad
Follow fullhyd.com on
About Hyderabad
The Hyderabad Community
Improve fullhyd.com
More
Our Other Local Guides
Our other sites
© Copyright 1999-2009 LRR Technologies (Hyderabad), Pvt Ltd. All rights reserved. fullhyd, fullhyderabad, Welcome To The Neighbourhood are trademarks of LRR Technologies (Hyderabad) Pvt Ltd. The textual, graphic, audio and audiovisual material in this site is protected by copyright law. You may not copy, distribute, or use this material except as necessary for your personal, non-commercial use. Any trademarks are the properties of their respective owners. More on Hyderabad, India. Jobs in Hyderabad.