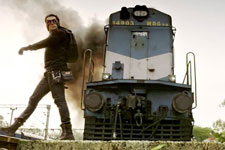 Ravi Kandala / fullhyd.com
EDITOR RATING
7.0
Performances
Script
Music/Soundtrack
Visuals
7.0
7.0
5.0
7.0
Suggestions
Can watch again
Yes
Good for kids
Yes
Good for dates
Yes
Wait for OTT
No
We are in the mood for a dare after watching Kick - so here's one. We dare Hollywood - and whatever other woods there are - to come up with a stunt where a person who's hurtled onto a railway crossing furiously pedaling a bicycle, suddenly shoves the cycle ahead and just swaggers across the track, centimeters ahead of the speeding train about to run him over.

But since the stunt has already been done in Kick and will be deemed a copy, we give you another dare. Give us a leading man who can pull off such a stunt without looking like a joker. We bet you can't - 'cos you don't have Bhai.

Bhai (Salman Khan for the uninitiated, and if you are indeed uninitiated, you might as well stop reading now) is touted the coolest leading man in B-Town. He can pull off the best stunts without batting an eyelid, pataofy the heroine without appearing like he wants to do it, solve the problems of the world without breaking a sweat, and claim that he is a virgin at 48 on national television.

Kick, therefore, is just a vehicle to showcase bhaidom, bhaigiri etc. The movie unfolds with Shaina (Jacqueline Fernandes) meeting Rishi (Randeep Hooda), a prospective suitor, in Warsaw. Shaina tells him about the love of her life, Devi Lal Singh (Salman Khan). Devi is a man who is forever seeking things he'll get his "kicks" from - these include helping friends elope and informing the girl's family, insisting on being arrested with handcuffs, speaking 9 languages in a day, and so on and so forth.

Devi meets Shaina during one of these kick-seeking missions and falls for her. Shaina reciprocates, but ends up dumped and heartbroken when Devi starts seeking his kicks elsewhere. Rishi then tells her that he has someone in his life, too - a thief by name Devil, whom he's not been able to arrest so far. It doesn't take a genius to figure out that Devil and Devi Lal Singh are the same. The twist in the tale comes when Devil re-enters their lives and is suffering from retrograde amnesia. How this twist reaches its bhai-logical conclusion is the crux of the remaining movie.

While most movies suffer from the "second-half syndrome" - a bad second half after a good first half - Kick suffers from the first-half syndrome. The first half is half-baked and slightly disappointing. However, the second half more than makes up for it. Packing in emotion, action, a couple of chartbusters and some absolutely seeti-maar lines from Salman, it is a riot for all the right reasons. The film's action director does a fab job and conjures up some super stunts. Sajid Nadiadwala takes the Telugu Kick, removes some of the comedy from the original and amps up everything else by 200% to give you a solid entertainer.

Salman Khan does everything expected out of him including bringing the required goofiness to a very well-written character (credits of course to the director of the original Kick - Surender Reddy). Jacqueline Fernandes is eye-candy and mind-boggling in a dance sequence, but acting is definitely not her forte. In one of the scenes, Devi's mom tells her that she can see love and anger for her son in Shaina's eyes - all we could see was the reflection of the actor in front of her.

Nawazuddin Khan makes a smooth transition to an out-and-out baddie role in a commercial setup. He is evil personified and conveys menace easily through his eyes. He should get bigger characters - he enters only Kick post-interval. Randeep Hooda plays a brooding and serious guy for the 18th time in his career (total number of films he's acted in = 18). He does manage to bring in a grin towards the end, though. The rest of the supporting cast, including Mithun, does very well - so much so that you wish they were given longer screen time.

Nadiadwala's spent a bomb on the flick, and it shows. From chases in Warsaw to songs in coal-mine disco settings, the money that's gone into each scene results in gushing opulence, thanks to some brilliant framing by Ayananka Bose - the cinematographer. The songs are chartbusters, and it'd be pointless to discuss them further.

Kick is a full paisa-wasool entertainer that will easily rule the roost this Eid. Whether or not you've seen the Telugu version, you'll get your kicks from this one.
Share. Save. Connect.
Tweet
KICK (HINDI) SNAPSHOT 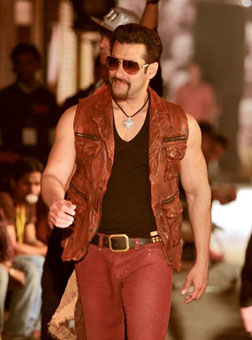 ADVERTISEMENT
This page was tagged for
kick 2 hindi movie language:en
Kick (Hindi) hindi movie
Kick (Hindi) reviews
release date
Salman Khan, Jacqueline Fernandez
Follow @fullhyderabad
Follow fullhyd.com on
About Hyderabad
The Hyderabad Community
Improve fullhyd.com
More
Our Other Local Guides
Our other sites
© Copyright 1999-2009 LRR Technologies (Hyderabad), Pvt Ltd. All rights reserved. fullhyd, fullhyderabad, Welcome To The Neighbourhood are trademarks of LRR Technologies (Hyderabad) Pvt Ltd. The textual, graphic, audio and audiovisual material in this site is protected by copyright law. You may not copy, distribute, or use this material except as necessary for your personal, non-commercial use. Any trademarks are the properties of their respective owners. More on Hyderabad, India. Jobs in Hyderabad.