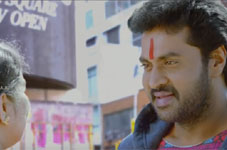 Josh / fullhyd.com
EDITOR RATING
4.5
Performances
Script
Music/Soundtrack
Visuals
6.0
4.0
6.0
7.0
Suggestions
Can watch again
No
Good for kids
Yes
Good for dates
Yes
Wait for OTT
Yes
About a decade back - as like today - Brahmanandam was the top comedian in the Telugu Film Industry. The second best at that time was not a matter of speculation. Everyone felt (some even knew) that Sunil was easily the only contender for the top comedian spot in the future. He seemed to be in practically every film that mattered. Jet-paced dialogue delivery, extremely flexible facial musculature, quirky body language - that guy was talent finding its calling.

Today, though, things have changed substantially. He's seen in less than one film a year. His roles now don't require him to demonstrate all those oodles of talent he used to entertain us with earlier. Sure, he does all that limb-twisting (his own in song sequences, and other people's in fight sequences), but that anybody with adequate practice can do. These roles, which are the standard Telugu Hero stereotype, demand very less of acting and a very lot of star power.

What we find exceedingly difficult to do is watch him play an English-speaking video game developer. For a guy who's supposed to have spent eighteen years in the USA, Krishna Vara Prasad (Sunil) talks and behaves too much like a graduate who spent too many evenings sipping chai and munching bajjis in non-descript tea stalls of Bhimavaram. The accent, the body language, the moral code (he has a sidekick - Giri - who calls him "Babugaru" in America) - they pretty much define incongruity.

So when Prasad desperately wants to go back to India, we wait with greater desperation. What's stopping him is his uncle (Mukesh Rishi), who won't hear anything about getting his nephew back in the country. Prasad, however, manages to board a flight to India (the journey is stuffed with a romance that is even more contrived than the NTR-Kajal one in Baadshah). Except, things go awry and he lands in a different household pretending to their son-in-law.

A dumb heroine and another lusty heroine; an illiterate blood-thirsty joint family; said blood-thirsty family realising the value of love via an elaborate, head-spinningly ill-conceived ploy of the hero; scapegoat Brahmanandam; racist jokes; drunk hero confronting girl that doesn't like him; girl falling for him after that cringeworthy encounter... There are as many movies in Tollywood with these elements as there are men named Muhammad in the world.

Indeed, Krishnashtami is just one more entry in that tall and wide pile. We wouldn't complain if it worked, but the movie barely holds itself together. The first hour is tiring and the second hour is very predictable. But Sunil being back in India makes the second hour more tolerable. And the performances of Thulasi, Pavitra Lokesh, Ashutosh Rana, Posani and Giri make it watchable. The comedy, too, works better in the second half - particularly that one scene where Posani translates an English letter to the illiterate family.

It is however in the technical departments that Krishnashtami scores well. The star of the show is Chota K Naidu, who does some exciting work in a superb car chase sequence in the latter part of the first half. The music by Dinesh Kanagaratnam is peppy and fun. That this is a Dil Raju production is fairly evident in the production values, but we wish it showed in the content as well.

It'd be interesting to know why Sunil practically dumped his promising comedy career and chose to become a hero. Perhaps it's the obvious - the attraction that the "hero" title has. But perhaps it's because of the lack of dignity a comedian in our films has to put up with - film after film, our top comedians have to bear with insults ridiculing everything from their physical features to their dreams and aspirations.

What would, however, be more interesting to know is how his switch pans out.
Share. Save. Connect.
Tweet
KRISHNASHTAMI SNAPSHOT 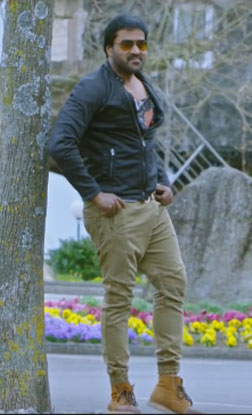 ADVERTISEMENT
This page was tagged for
Krishnashtami telugu movie
Krishnashtami reviews
release date
Sunil, Nikki Galrani
theatres list
Follow @fullhyderabad
Follow fullhyd.com on
About Hyderabad
The Hyderabad Community
Improve fullhyd.com
More
Our Other Local Guides
Our other sites
© Copyright 1999-2009 LRR Technologies (Hyderabad), Pvt Ltd. All rights reserved. fullhyd, fullhyderabad, Welcome To The Neighbourhood are trademarks of LRR Technologies (Hyderabad) Pvt Ltd. The textual, graphic, audio and audiovisual material in this site is protected by copyright law. You may not copy, distribute, or use this material except as necessary for your personal, non-commercial use. Any trademarks are the properties of their respective owners. More on Hyderabad, India. Jobs in Hyderabad.