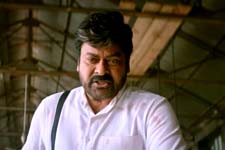 Sai Tulasi Neppali / fullhyd.com
EDITOR RATING
7.0
Performances
Script
Music/Soundtrack
Visuals
7.0
6.5
6.0
7.5
Suggestions
Can watch again
No
Good for kids
No
Good for dates
Yes
Wait for OTT
No
Malayalam cinema's biggest box-office hit of all time, Lucifer, has gotten a Telugu makeover and become "Godfather". This Chiranjeevi-starrer didn't just get a quick costume change - it wears a new personality altogether. The hint is in the monikers: a Godfather is the boss of bosses ("baap ka baap"), but Lucifer is a more sinister being. The movie Lucifer (with Mohanlal) thus had a dark, magnetic aura, whereas Chiranjeevi's Godfather is a watered-down political drama tailor-made for Megastar fans.

Brahma aka Godfather (Chiranjeevi) is a wily politician with a mysterious past. When his party's beloved leader, and the Chief Minister of the State, PKR, passes away while in office, it creates a power vacuum that needs to be quickly filled. The party's second-in-command, Varma (Murali Sharma), is the most likely CM candidate, but PKR's son-in-law, Jay (Satyadev), has bigger ambitions. In exchange for unlimited funds for the party, Jay cuts a deal with an overseas drug mafia lord. With Jay as Chief Minister, everybody will get paid to look the other way as narcotics flood the state.

But Brahma will not stand for it. Brahma is no saint - there are hushed whispers of his life as a gold and diamond smuggler in Dubai - but he is a man of principle. He fights to keep dirty politics behind closed doors and out of the common people's lives.

Lucifer and Godfather are the kind of anti-heroes that Indian cinema needs more of. So many political dramas from Arjun's Oke Okkadu to Mahesh Babu's Bharat Ane Nenu tout benevolent, God-like leaders as the way to root out corruption and create a utopian Indian society. Their righteous sermons may give us goosebumps at that moment, but their idealism rings hollow in light of our everyday realities. But for Godfather, the most effective weapon against evil is a greater evil. And he is willing to be that necessary Greater Evil.

While Lucifer's story doubled down on depicting the value of evil, Mohan Raja's Telugu adaptation is a bit more hesitant about this message. When a village woman gets coerced into going on national news to accuse him of abuse, he forgives her and gifts her a pile of cash. But Lucifer didn't bother with such dramatic reconciliations. Instead, the man behind this plot gets shot in the head. Brahma's political manoeuvres are also far hammier. His method of convincing the party's MLAs to side with him is to get an investigative journalist (played surprisingly well by director Puri Jagannadh) to dig up dirt on their corrupt dealings and present it as a movie.

Such theatrics dilute Godfather's strong message to the point that it becomes a boilerplate drama - especially towards the end, with Salman Khan's role as a paid assassin, Masoom Bhai. His cameo was obviously brokered for the hoot of it, but the tone of the movie - as a cerebral, restrained drama - simply disintegrates after his entry. It reminded me of what happens when stories take gratuitous tangents to accommodate celebrities, like when Liger brought in Mike Tyson: it never works, no matter the first-day-first-show crowd's whistles and cheers for those scenes. When Brahma and Bhai break into dance at the end, to an item song picked from musician Thaman's bottom-drawer discards, it is so out of character for Brahma that it cheapens his image.

To Mohan Raja's credit, his screenplay is far tighter than that of Lucifer. But in trimming off the extra fat, he inadvertently cuts off bits of its soul too. There was a lot of intrigue in Lucifer surrounding the identity of Mohanlal's character Stephen's biological father, which is never revealed even in the end. In Godfather, however, we learn very quickly that Brahma is the illegitimate son of PKR, and the reason why PKR's daughter (Nayantara) hates him. It allows for an emotional moment during PKR's funeral, but at the cost of making Brahma a less mysterious character. Brahma's soft side is his connection with the orphanage where he grew up, and where he still resides. But without any scenes of him building rapport with the orphans, his interactions with the kids feel superficial.

Because Godfather/Lucifer are such star vehicles, comparisons between the stars are inevitable. Mohanlal, with his crisp-white lungis and his death stares, brought an intensity and gravitas to Lucifer that Chiranjeevi does not match. Lucifer suffered from one too many slow shots of Mohanlal walking, climbing into and out of his black Ambassador car. In Godfather, these glory shots get that extra bit of Tollywood zhoosh. But Chiru looks so hampered in the thick layers of foundation and the carefully-coiffed wig, that he doesn't seem very comfortable in Brahma's skin.

In fact, it is unnecessary makeup that foils Nayathara's performance too. Even at her father's funeral or in moments of rage, her perfectly-lined eyes and her smoothed buns make her an unsympathetic character.

Satyadev who plays Jay, PKR's sleazy son-in-law, is a formidable rival to Brahma, but the best performance comes from Murali Sharma who plays the wheedling career politician Varma with a permanent stoop in his back giving him the appearance of a wise turtle. 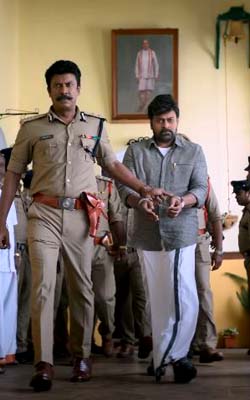 See Godfather full details
TOP COMMENT
Vicky on 8th Oct 2022, 11:23pm | Permalink
With all due respect I do not think movie is reviewed unbiased or as well said "Perhaps the right way to watch it is as a die-hard Chiranjeevi fan" reviewer is a real hard core fan of Megastar.

I remember well same reviewer rated Karthikeya 2 lower which was far more better, technically strong and above all its original script.

Megastar styling and dressing really disappointed, specifically his wig God save us. Unnecessary songs and lengthy fights and comical BGM (in couple of scenes)


Pros: Satyadev
Cons: BGM, Megastar styling, Songs
5
0
GODFATHER USER REVIEWS
1 - 4 OF 4 COMMENTS
POSITIVE  |  NEGATIVE |  NEWEST  |  OLDEST  |  MOST HELPFUL  |  LEAST HELPFUL
USER RATING
10
1 USER
Performances
Script
Music/Soundtrack
Visuals
NA
NA
NA
NA
Can watch again - NA
Good for kids - NA
Good for dates - NA
Wait for OTT - NA
Waqas Riaz Arain on 29th Jan 2023, 12:57pm | Permalink
wow really nice how about notification manager for adobe acrobat
Sanjana Kaur on 8th Dec 2022, 4:21pm | Permalink
Great post!!!
https://www.sanjanakaur.com
RATING
10
Sai Tulasi Neppali on 13th Oct 2022, 11:49am | Permalink
Thanks for your feedback, Vicky.
I like Chiru's older work, but I am not a hardcore fan of any actor, really. I try to rate movies based on the intention of the filmmaker and how well he achieved that. This movie was a Chiru-fest made for Chiru fans, and it accomplished that far better than, say, Acharya.
I confess that I am still honing my rating system. On such a wide rating scale, it is hard to pinpoint why one movie might be 6.5 and another might be 7. And because movies are rated as they come, and not side-by-side, there may be mistakes in rating that I can't go back and correct.
My review text, however, is a far better gauge of what I think of the movie. I call out all the ways it worked or didn't work. Same as you, I point out the bad makeup and the terrible songs. And in my Karthikeya review, I highlight the stunning cinematography.

So I urge you to not get hung up on the numbers and use them as just one of the many signals for whether you should watch the movie.
Gigastar on 24th Oct 2022, 11:38am | Permalink
No movie industry in this world has this inexplicable practice of making movies for 'fans', except India.....
Vicky on 8th Oct 2022, 11:23pm | Permalink
With all due respect I do not think movie is reviewed unbiased or as well said "Perhaps the right way to watch it is as a die-hard Chiranjeevi fan" reviewer is a real hard core fan of Megastar.

I remember well same reviewer rated Karthikeya 2 lower which was far more better, technically strong and above all its original script.

Megastar styling and dressing really disappointed, specifically his wig God save us. Unnecessary songs and lengthy fights and comical BGM (in couple of scenes)

ADVERTISEMENT
This page was tagged for
Godfather telugu movie
Godfather reviews
release date
Megastar Chiranjeevi, Salman Khan
theatres list
Follow @fullhyderabad
Follow fullhyd.com on
About Hyderabad
The Hyderabad Community
Improve fullhyd.com
More
Our Other Local Guides
Our other sites
© Copyright 1999-2009 LRR Technologies (Hyderabad), Pvt Ltd. All rights reserved. fullhyd, fullhyderabad, Welcome To The Neighbourhood are trademarks of LRR Technologies (Hyderabad) Pvt Ltd. The textual, graphic, audio and audiovisual material in this site is protected by copyright law. You may not copy, distribute, or use this material except as necessary for your personal, non-commercial use. Any trademarks are the properties of their respective owners. More on Hyderabad, India. Jobs in Hyderabad.