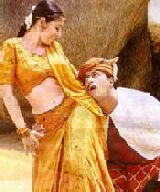 Manjula Murari / fullhyd.com
EDITOR RATING
7.5
Performances
Script
Music/Soundtrack
Visuals
NA
NA
NA
NA
Suggestions
Can watch again
NA
Good for kids
NA
Good for dates
NA
Wait for OTT
NA
A corruption-free system, casteless society, literate and techno-savvy public, suave and educated leaders! No, this is no Utopian State envisaged by Plato for his Republic. It is a society that people will vote for in the 21st century. And if you think it is impossible, then don't miss out on this latest Arjun-starrer. In a decade of gauzy romances and MTV-hip glamour, Shankar, A M Ratnam and A R Rahman - the trio who had earlier made films like Bharateeyudu, Gentleman, Premikudu and Jeans - have come together to give yet another hard-hitting entertainer in Oke Okkadu.

If it was corruption in Bharateeyudu and reservations in Gentleman that were hit upon, Oke Okkadu is Shankar's statement on the nation's pet-hate - politics. The film is about the havoc politics plays with the life of an ordinary, close-knit family of Purushottam. A cameraman in the reputed QTV, Purushottam is promoted to the rank of a bureau chief, thanks to his never-say-die attitude. And what's more, his very first interview brings him face-to-face with the CM Chowdhary (Raghuvaran).

By a convulted turn of events, Chowdhary throws an open challenge to Purushottam to take on the CM's post for a day to understand the problems and pressures of heading a State. And even before you can blink your eyes, Purushottam is the new one-day CM. What's more, minutes after he is sworn in as the new CM, he starts typing in suspension orders for all corrupt officers and ministers, much to the chagrin of his political brethren.

However, real problems begin for the one-day CM, once out of office. Back to his regular schedule, Purushottam finds himself being drawn into the political web, much against his wishes. But one attempt on his life and the hitherto unambitious mediaman is ready to take on the ultimate challenge of politics. Voted back to power with an unprecedented majority (the figure puts it at 97 per cent), Purushottam sets out to realise his dream, losing his family in bargain.

Shankar starts off with a fabulous idea and succeeds in sustaining the drama till the very end. His hold on the nuances of the man-woman relationship becomes evident in the way he manages to intertwine the love story of Purushottam and Chandramukhi (Manisha Koirala), without losing focus on the main story. The way he handles the climax is also simply superb, especially the subtle way in which the transformation of Purushottam into a scheming politician is dealt with.

And when it is a film by Shankar, one can expect a visual delight. And Oke Okkadu is no different. Oomph of glamour, out-of-the-world dance sequences, impossibly exotic locales,energetic, catchy numbers by A R Rahman, mind-boggling special effects and spirited performances from its lead cast, all coupled with a fabulous plot make the film a must-see.
Share. Save. Connect.
Tweet
OKE OKKADU SNAPSHOT

ADVERTISEMENT
This page was tagged for
okkadu telugu movie
oke okkadu telugu movie wap
oke okkadu review rating
oke okkadu telugu movie free download
oke okkadu moviezwap
Follow @fullhyderabad
Follow fullhyd.com on
About Hyderabad
The Hyderabad Community
Improve fullhyd.com
More
Our Other Local Guides
Our other sites
© Copyright 1999-2009 LRR Technologies (Hyderabad), Pvt Ltd. All rights reserved. fullhyd, fullhyderabad, Welcome To The Neighbourhood are trademarks of LRR Technologies (Hyderabad) Pvt Ltd. The textual, graphic, audio and audiovisual material in this site is protected by copyright law. You may not copy, distribute, or use this material except as necessary for your personal, non-commercial use. Any trademarks are the properties of their respective owners. More on Hyderabad, India. Jobs in Hyderabad.