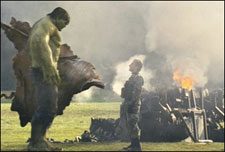 Samrat Sharma / fullhyd.com
EDITOR RATING
7.0
Performances
Script
Music/Soundtrack
Visuals
7.5
4.5
7.0
7.5
Suggestions
Can watch again
No
Good for kids
Yes
Good for dates
Yes
Wait to rent it
No
As comic book super heroes go, the Hulk has always been a bit of a flat character, showing promise and character depth in areas that could never be rightly explored in the cinematic or even TV arenas. Mad scientists are one thing, I mean, but grey bouncers in Vegas? I don't think so. I was worried that the bloated pseudo psycho-babble mess that was Ang Lee's take on the film was going to necessitate another bloated loud and silly film, this time erring on the side of action.

Louis Leterrier's The Incredible Hulk is mostly loud, often silly, but one thing it is not, is bloated. It is one of the most streamlined summer action movies in recent memory, constantly finding ways of moving forward. The kinetic energy of the film is breathless, and it is long after you have had a solid fun time, that you realize that it has nothing that resembles a plot.

In a possibly extremely smart move, the makers decided to make this film a sequel and a reboot of the franchise at the same time. Disregarding the Ang Lee continuity, the film immerses us in a short montage retelling the origin story as a flashback a al Spidey, and then gets down to business. This works wonders for a film that needs no origin. It is a fugitive story, and it works better if you start on the run. Especially since you have actors with the familiar chemistry of long departed friends - Norton and Tyler being the best in that lot.

Norton is very good as the on-the-run Dr. Bruce Banner, a role that has no real character arc, except that he's being pursued by mad General Ross (William Hurt playing it kinda tired, but mostly bored), and his search for a cure necessitates him coming back to NY and being on the run with love of his life Betty Ross (Liv Tyler looking positively love of the life-ish). Between these shared scenes of nostalgia and fugitive escapes, there's not a whole lot of meat, plot-wise, hanging.

Enter Emil Blonsky. Tim Roth is fantastic as an ageing soldier who should be a desk job Colonel by now, but hasn't accepted that defeat, constantly looking for another fight to win. His character arc too is a solid story of a man possessed with winning, addicted to a drug that makes him feel younger, and ultimately leads to him losing all control. His ultimate mutation into Abomination is made that much more satisfying by giving him a great character and a great actor to play it.

Hulk has always been about the chase and the occasional interesting villains, and in that Tim Blake Nelson in a setup for the future films is wonderfully playful, and I adored his take on the Samuel Sterns character. This is not to take away from Norton, who is truly having a lot of fun, and brings the exact sort of physicality to Banner that was missing from the earlier film. Indeed the smartest decision was to start with Norton hiding and then the Hulk appearing in what appeared to be the first 20 minutes of the film.

The chase sequence there owes a lot to the Bourne films, though I loved how it quickly reaches a point where we have the Hulk duking it out against the army in an open ground in broad daylight. The Hulk never looks real enough to believe in him. He is a bunch of pixels, but at least they use him well enough, and his physicality has weight this time around. The film coasts along pretty merrily until Banner's and Hulk's problems begin in the final action sequence.

Banner suddenly decides to stop being interested in a cure and caring about himself and decides to become a martyr. Sure, he is the big hero, but that transition is never apparent. He just suddenly decides to Hulk up and save the city. As the Hulk, the final fight sequence fizzles out pretty soon. The big screen action and the brutality of it is a lot of fun when the Abomination and the Hulk are fighting on the streets, but soon it progresses to being on top of a building, with Betty in danger and closed quarter shoving - never a good idea when the fight is between 11 feet dudes.

This isn't to say the fight doesn't deliver the goods, but it could have been way more that what it was. This is eventually what you can say about the film, too. Good fun, but never reaching its fullest potential. Nevertheless, this remains a solid action movie, and a good time at the cinemas. It is not as successful at giving us distilled down superhero goodies like Iron Man, but Marvel is still 2 up this summer, and I can't begrudge them this one.
Share. Save. Connect.
Tweet
THE INCREDIBLE HULK SNAPSHOT

See The Incredible Hulk full details
THE INCREDIBLE HULK USER REVIEWS
1 - 3 OF 3 COMMENTS
POSITIVE  |  NEGATIVE |  NEWEST  |  OLDEST  |  MOST HELPFUL  |  LEAST HELPFUL
USER RATING
5.3
3 USERS
Performances
Script
Music/Soundtrack
Visuals
4.0
5.7
5.0
7.0
Can watch again - Unsure
Good for kids - Unsure
Good for dates - Unsure
Wait to rent it - No
Ammanamanchi Krishna on 6th Jul 2008, 6:40pm | Permalink
How can you compare the hulk and Iron man, both Banner and Stark are two completely differnt characters one is a playboy and was born into money,the other had to work his butt off, as far the movies are concern both are equally well made, and both could have been could have been better, yes even iron man was dissappointing at the end of the film(not the secret ending of course)this hulk movie was how the first one should have been, and it's the movie that all hulk fans have been waiting for.
sandeepjakkaraju on 24th Jun 2008, 10:40am | Permalink
pretty 'ok' movie....
RATING
5
Krishna on 23rd Jun 2008, 9:25am | Permalink
I went into this with a certain amount of doubt knowing how disappointing Ang Lee's 1st installment was and I must say this one was a few notches higher.

ADVERTISEMENT
This page was tagged for
The Incredible Hulk english movie
The Incredible Hulk reviews
release date
Edward Norton, Liv Tyler
theatres list
Follow @fullhyderabad
Follow fullhyd.com on
About Hyderabad
The Hyderabad Community
Improve fullhyd.com
More
Our Other Local Guides
Our other sites
© Copyright 1999-2009 LRR Technologies (Hyderabad), Pvt Ltd. All rights reserved. fullhyd, fullhyderabad, Welcome To The Neighbourhood are trademarks of LRR Technologies (Hyderabad) Pvt Ltd. The textual, graphic, audio and audiovisual material in this site is protected by copyright law. You may not copy, distribute, or use this material except as necessary for your personal, non-commercial use. Any trademarks are the properties of their respective owners. More on Hyderabad, India. Jobs in Hyderabad.