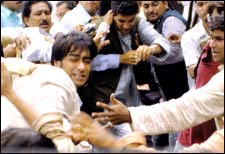 Samrat Sharma / fullhyd.com
EDITOR RATING
5.0
Performances
Script
Music/Soundtrack
Visuals
NA
NA
NA
NA
Suggestions
Can watch again
NA
Good for kids
NA
Good for dates
NA
Wait for OTT
NA
After Rajkumar Santoshi's fall from grace in Family, especially hard considering the superlative Khakee that preceded it, Halla Bol is his attempt at getting back into the game. Considering mass-flavored vitriol aimed at the system and the apathy of people at large is what he does best, the themes of Halla Bol come as no surprise. Even so, if you have heard that this is a movie that aims to talk about the total collapse of the judiciary system during the Jessica Lall murder case, you have heard wrong.

Halla Bol is a masala film with some character study thrown in for good measure, but it never is, and I think it never aimed to be, about a single issue. This film is completely and absolutely devoted to Ajay Devgan's character and his biography from rags to riches to revolution. Through the awakening of one man, Santoshi seems to say, I will show you how you must awaken too. Only, you yawn.

See, Santoshi is an old school director who likes to paint his canvas in broad hues. Subtlety is a game that he plays reluctantly, if ever. He does bring a certain sensibility to his direction, completing the small touches in a scene as effectively as the huge personas and their loud dialog. This merging of two schools that he does best is in full display here; unfortunately, so is his penchant for over-the-top acting and spoon-feeding the audience.

Characters endlessly talk amongst themselves in highly unbelievable dialog, just to explain to the audience what's going on, and more criminally, what is happening on screen. 'Funny' one-liners mark every bit of serious proceeding in the film. Absolutely criminal, however, is the extremely over-the-top cast spewing devastatingly bad dialog. Truly, the writing is up there in the hall of shame.

It's not like the film doesn't have a half decent plot to talk about. It starts absolutely brilliantly taking potshots at the film industry along the way, and we are introduced to Sameer Khan (Devgan), the darling actor, mega star, and a little bit of an a$$#ole. His marriage with Sneha (Balan) is not going entirely well, but he is power-drunk enough not to notice. As things start moving along, he goes to one of many filmi parties, and while he is practicing his smile in front of a mirror, someone shoots a girl dead in front of him.

Despite having seen the two sons of a powerful politico and a liquor baron who did it, and knowing the poor girl, Sameer clams up in front of the police. This Shayan Munshi act is aped by everyone else there in the party, though it only troubles our hero. This leads us to one of largest flashbacks in recent memory, one that lasts more than an hour, chronicling Sameer's rise to fame from a street-play background, and introducing us to the one saving grace of the film - Pankaj Kapur.

Kapur plays Sidhu, a dacoit turned theater personality, who doesn't stand for deceit or standing behind the lines, and Sameer's guru. When Sameer decides to speak the truth, it is because of his earlier fallout with Sidhu, and that brings him back to Sameer's aid, just as the corrupt minister and the liquor baron plot and scheme to end his credibility. Kapur's strong presence in the first half is crackerjack stuff, but his acting chops are the only ones that save what is to be saved in the second half.

Despite the entirely wasteful first half, and a flashback that appears almost entirely unnecessary, things pick up when the fight for justice begins. This is when Kapur turns in a one-man presence like performance dominating the proceedings and giving us something to look forward to. This, however, works to the detriment of the film, as the rest of the cast around him is behaving most atrociously.

It's all here - 'comic' villains, heroes peeing on a rich man's carpet, rich corrupt men enjoying their corruption with half naked firang chicks, an always worrying maa, and a wife that comes around. After Sameer's credibility has been run to the ground, his family threatened and his friends jailed, he turns back to doing a street play to expose the truth, which leads people to literally 'Halla Bol'. And all this happens in a quick 5 minutes. Evidently changing the nation takes less time than we thought.

With the exception of Kapur, and some affecting moments turned in by Devgan, the rest of the cast does. not. act. The dialog is painfully trite, the proceedings eerily clichéd, and the screenplay unbalanced to its limits. The songs kill the mood, if the drab cinematography has not done that already. Maybe I can't get in your head, Mr. Santoshi, but when you create a film about a serious topic, wouldn't it have helped, if you were, I don't know, serious?
Share. Save. Connect.
Tweet
HALLA BOL SNAPSHOT

ADVERTISEMENT
This page was tagged for
Halla Bol hindi movie
Halla Bol reviews
release date
Ajay Devgan, Pankaj Kapur
theatres list
Follow @fullhyderabad
Follow fullhyd.com on
About Hyderabad
The Hyderabad Community
Improve fullhyd.com
More
Our Other Local Guides
Our other sites
© Copyright 1999-2009 LRR Technologies (Hyderabad), Pvt Ltd. All rights reserved. fullhyd, fullhyderabad, Welcome To The Neighbourhood are trademarks of LRR Technologies (Hyderabad) Pvt Ltd. The textual, graphic, audio and audiovisual material in this site is protected by copyright law. You may not copy, distribute, or use this material except as necessary for your personal, non-commercial use. Any trademarks are the properties of their respective owners. More on Hyderabad, India. Jobs in Hyderabad.