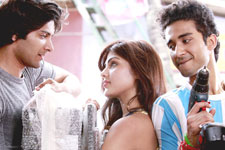 Nupur Barua / fullhyd.com
EDITOR RATING
4.0
Performances
Script
Music/Soundtrack
Visuals
5.0
4.0
6.0
7.0
Suggestions
Can watch again
No
Good for kids
No
Good for dates
Yes
Wait for OTT
No
The selling point of Sonali Cable, ever since the trailers were released, has been the proposal, put forth by various people involved with the movie, that you will finally see Anupam Kher in a role that he has never attempted before. Difficult, you think, and guess what, you are right. Yet, it has been the one element that has aroused interest and curiosity in Sonali Cable - even more than the story, although that looked interesting enough, too.

Sonali (Rhea Chakraborty) is a spirited, determined and somewhat foul-mouthed young girl who runs a broadband business with the help of two local boys. She jumps from rooftop to rooftop and personally handles wires and other complicated connections to ascertain that none of her clients faces even a single second sans internet connection. It helps that her love interest, Raghu (Ali Fazal), is the son of a local politician (Smita Jaykar), and now her partner in the business. Illegal or questionable, Sonali's cable connection is never down, and life is good.

Enter Waghela (Anupam Kher), the owner of Shining Inc, which happens to be a huge conglomerate. His intention is to take over the city as the one-stop provider of everything internet-related. To achieve that, he bullies, cajoles and pays other smaller internet service providers, but Sonali is unyielding.

To Waghela's startled surprise, Sonali is defiant and refuses to bow down before his might. Soon, this escalates into a war between a nobody and a big shot. As each party rushes towards the finishing line in this race for local connection rights, a few ugly truths are spewed out, and Sonali and gang find themselves having to face complexities that they did not know existed.

While the story sounds interesting enough on paper, its execution (to make it into a movie) is pretty disappointing. The film looks like a collage of sequences put together to somehow give it a shape and direction, and the screenplay is not structured well at all. Once the premise (Sonali's character and popularity) is set, nothing much happens till Waghela comes into the lives of this locality.

Even after that, given the way the characters have been set up, you know how it is going to end. So you sit through all the forced humour and the smug morality of the downtrodden, and tolerate their convoluted eccentricities, to get to its natural conclusion. It is almost as if the writer, also the director (Charu Dutt Acharya), wrote out a screenplay keeping in mind the basics of writing, but forgot to add soul to it all.

The confusion begins when the movie diverts from a straightforward black vs white story and enters multiple layers of complicated plots - none of which is novel, and none of which is compelling enough to make you sit up and take notice. The background stories of various characters only add to the chaos, and you wonder how they are even relevant. The crux - the love story and the united front that the lovers put up against a powerful adversary - is lost somewhere in the middle of justifying Sonali's personality and understanding Raghu's mother.

Rhea Chakraborty is a pretty young girl, but one-dimensional when it comes to the portrayal of a complicated character. She is confident, but does not have either the talent or the maturity to pass off as Sonali. In addition, she sounds more like a North-Indian urban chick than a Maharashtrian middle-classer / slum dweller. To be fair, however, she appears sincere.

Ali Fazal is stuck in stereotypical roles. In this movie, too, he plays the silent and strong lover, much like his Tassavur in Bobby Jasoos. He does a good job, but his lack of interest is clear, especially in the lacklustre chemistry with his co-star. Swanand Kirkire is a surprise, and you hope to see him in longer roles soon. Smita Jaykar is effective, but the role could have been better written.

As for Anupam Kher, this is not his best role yet. True, he plays a mean, conniving businessman, whose actions are more than justified when you look at them from his point of view, but he has been more impressive in a host of other roles in a long and illustrious career.

As with most debuting directors, Acharya has paid attention to his production and costume designs. He understands, you presume, that the visuals need to be convincing. He may have missed out on a consistent plotline, but the visuals are appealing and authentic.

The music is decent enough, and the editing could have been better. There are times when the film drags, and destroys whatever little hope you have nurtured that at some point the story is going to be told better.

Sonali Cable is worth a watch, however, because in it, you see another side of Swanand Kirkire, and you also begin to identify with some of the peripheral characters. It is a story that has been told too often - how politicians and businessmen are out to destroy this country together - but it may find resonance in your life. It just needed to be told better.
Share. Save. Connect.
Tweet
SONALI CABLE SNAPSHOT 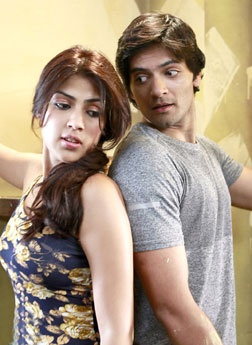 ADVERTISEMENT
This page was tagged for
Sonali Bindi Hindi movie
Sonali Cable hindi movie
Sonali Cable reviews
release date
Rhea Chakraborty, Ali Fazal
Follow @fullhyderabad
Follow fullhyd.com on
About Hyderabad
The Hyderabad Community
Improve fullhyd.com
More
Our Other Local Guides
Our other sites
© Copyright 1999-2009 LRR Technologies (Hyderabad), Pvt Ltd. All rights reserved. fullhyd, fullhyderabad, Welcome To The Neighbourhood are trademarks of LRR Technologies (Hyderabad) Pvt Ltd. The textual, graphic, audio and audiovisual material in this site is protected by copyright law. You may not copy, distribute, or use this material except as necessary for your personal, non-commercial use. Any trademarks are the properties of their respective owners. More on Hyderabad, India. Jobs in Hyderabad.