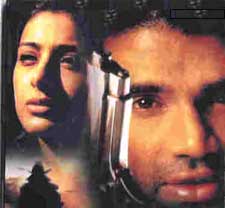 Rohit Murari / fullhyd.com
EDITOR RATING
1.0
Performances
Script
Music/Soundtrack
Visuals
NA
NA
NA
NA
Suggestions
Can watch again
NA
Good for kids
NA
Good for dates
NA
Wait for OTT
NA
Ever thought that mainstream actors of the likes of Suniel Shetty and Tabu would ever have had to dabble in semi-porn? See it for yourself. On second thoughts, that is probably the path most actors tread en route to attaining fame. Hollywood is replete with examples - Kate Winslet comes to mind foremost.

This film probably took years in the making, so much so that Suniel Shetty and Tabu refused to film for it any more and the makers had to make do with whatever was shot with the two of them. They have a presence of about half an hour, all inclusive. The rest has been made up with a support cast of unidentifiable men who are bustier than a brigade of equally unidentifiable women (and they are pretty well-endowed, too) who have a strange aversion to any fabric that conceals their polka-dotted underwear, and a guy with a mask on his face who is supposed to be Suniel Shetty - just that he is two sizes too small.

Well, folks, it goes like this. From what could be gathered after a considerable amount of effort, the main plot (oh, there is a plethora of plots to choose from here!) revolved around one family that was split up by a certain Sadashiv, only to be brought back together by circumstances, not entirely of someone's undoing. Sadashiv was Kumar sahib's (Mohan Joshi) manager who swindles about Rs. 25 lakhs. To escape from prison, he stages his suicide and leaves behind a suicide note in which he gives a fabricated account of his illicit relations with Mrs. Kumar.

Our Mr. Kumar, as has to be expected of the typical male chauvinist (read 'this reviewer'), asks Mrs. Kumar to leave along with Ajay and yet-to-be-born Komal, who he thinks are the children of Sadashiv. Some fifteen years down the line, Ajay comes back to Shimla to work for Jimmy, who is in love with Shilpa (Tabu), who in turn is supposed to fall for Raja (Suniel Shetty), Ajay's elder brother, and on whom the local don Pummy (Gulshan Grover) has set his eyes. So, we have a kind of love-square happening. If the big-bro is romancing, can the little one be far behind? Nope. He also goes about courting Nisha.

In the midst of all this, we have a slasher on the prowl. He kills, on the 13th of every month, one person who is close to Sadashiv. Oh, wait! There is also a melancholic love story revolving around Anand babu (Pankaj Dheer), and Anita (Archana Puran Singh), who had left him for a rich man, providing us with such a 'smasher' of a song as:

Of course, the film has generous doses of seduction and rape sequences, and those who felt cheated by the unkindly attitude of the censor board towards them in Mahal can definitely find some compensation here.

And, for once, let us just reserve our judgement on 'minor' things like direction, cinematography, choreography, music, background score etc. Let's cut them some slack.
Share. Save. Connect.
Tweet
KHANJAR SNAPSHOT

ADVERTISEMENT
This page was tagged for
khanjar movie hindi
khanjar film ki kahani
khanjar movie
Khanjar hindi movie
Khanjar reviews
Follow @fullhyderabad
Follow fullhyd.com on
About Hyderabad
The Hyderabad Community
Improve fullhyd.com
More
Our Other Local Guides
Our other sites
© Copyright 1999-2009 LRR Technologies (Hyderabad), Pvt Ltd. All rights reserved. fullhyd, fullhyderabad, Welcome To The Neighbourhood are trademarks of LRR Technologies (Hyderabad) Pvt Ltd. The textual, graphic, audio and audiovisual material in this site is protected by copyright law. You may not copy, distribute, or use this material except as necessary for your personal, non-commercial use. Any trademarks are the properties of their respective owners. More on Hyderabad, India. Jobs in Hyderabad.