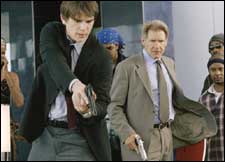 Deepa Menon / fullhyd.com
EDITOR RATING
3.0
Performances
Script
Music/Soundtrack
Visuals
NA
NA
NA
NA
Suggestions
Can watch again
NA
Good for kids
NA
Good for dates
NA
Wait for OTT
NA
We have to hand it to the makers of this one for coming up such an apt title, if not for anything else. Hollywood Homicide is a tedious exercise in how to kill a script. Fortunately for everyone involved, though, HH is extremely forgettable.

Harrison Ford (Joe Gavilan) and Josh Harnett (K C Calden) play two bumbling cops who'd clearly rather be doing something else. Ford moonlights as a real estate salesman to pay alimonies to his three ex-wives, and Hartnett (cute but not all there) wants to be an actor. Hartnett is looking for his father's killer and Ford is trying to save his job (and his ass) from a malevolent colleague. Ford is a tired-out, Viagra-popping cynic, while Hartnett is earnest and upright (except when he's taking yoga classes for a bevy of babes). Personal histories and lovable quirks thus established, the movie plods on.

When four rappers are gunned down in a popular hip-hop hangout, our boys in blue are called on to snoop around. The trail leads them to the owner of a much-coveted music label, played by Isaiah Washington (Antoine Sartain, who writes his record contracts in blood). You will figure out at this point that this man is the culprit. Primarily because he looks like a culprit, talks like a culprit and is shift-eyed like a culprit. But you have a long, boring wait while the two detectives catch on.

In the meanwhile, you're treated to a series of chases, gags and celeb cameos (rappers Master P and Kurupt, plus golden crooners Gladys Knight, Frank Sinatra Jr. and Smokey Robinson). When the witnesses are questioned and the clues painfully pieced together, there follows a climactic car chase (big surprise). This is your typical car American chase, with television helicopters overhead, surprised cab drivers and the usual screeching pointlessness we've watched a gazillion times before.

But this must be said of HH: buried under all that mediocrity are some decently funny lines, and you can tell the lead actors are really trying to inject some credibility into the whole thing.

The director, Rob Shelton, manages slapstick well. The sight of Harrison Ford riding a pink bicycle with balloons fluttering behind him is just the right amount of silly and quite funny. As is the interrogation scene with Hartnett going into his yogic Om-mode.

The rest of the film, however, requires you to make more of an effort if you must enjoy yourself. An effort of will, mostly. As in: I will not compare this with other Harrison-Ford-starrers. I will sit through this movie because I believe there is something good in every filmmaker. I will ignore the completely pointless script and instead concentrate on taking a nap.

But you can also do that at home.

ADVERTISEMENT
This page was tagged for
Hollywood Homicide english movie
Hollywood Homicide reviews
release date
Harrison Ford, Josh Hartnett
theatres list
Follow @fullhyderabad
Follow fullhyd.com on
About Hyderabad
The Hyderabad Community
Improve fullhyd.com
More
Our Other Local Guides
Our other sites
© Copyright 1999-2009 LRR Technologies (Hyderabad), Pvt Ltd. All rights reserved. fullhyd, fullhyderabad, Welcome To The Neighbourhood are trademarks of LRR Technologies (Hyderabad) Pvt Ltd. The textual, graphic, audio and audiovisual material in this site is protected by copyright law. You may not copy, distribute, or use this material except as necessary for your personal, non-commercial use. Any trademarks are the properties of their respective owners. More on Hyderabad, India. Jobs in Hyderabad.