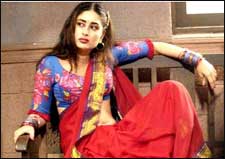 At last, finally, hallelujah, a 'hatke' film that actually delivers. The promos of Chameli have been everywhere for a while now. And when something's being trumpeted to the skies for being so different, and for so long, then you begin to have your doubts. Especially when it has Karreina Kapoor in the lead.

You know Karreina. She of the snooty quotes and public catfights. And oh, yeah, wasn't she also in some movies? The ones with all the pink-pink and hearts in the tagline. So how different can this one be, right?

We could scream 'wrong' here in capitals, but that would make no sense (not like that's stopped us before). Chameli got all the attention it did because it had

What's refreshing about this movie is that the director/scriptwriter makes no attempt to water down Chameli's character with a lot of talk about phony morals and 'izzat' and the like.

Sure, there are the clichés. She has a miserable past (abandoned at six, meets her first customer at eight). And she's positively motherly about her friends - Hasina the transvestite, and a young chai-wallah. Plus, she dances in the rain, like any self-respecting Bollywood actress, and she has the most nerve-wracking giggle this side of a pebble in a tin.

But she also spits and swears with the best of them. She sits all sprawled, holds her cigarette with complete familiarity, and gives as good as she gets. She doesn't bother with ladylike because she knows she's all woman. There's nothing wishy-washy about her - Karreina as Chameli is all there, all the way.

As he gets to know Chameli, who's increasingly scandalized about his squeaky clean past and frighteningly moral stand on things, Bose is dragged into her world by the sheer strength of his fascination for her. As he says in the narration, there were many times in the course of the night when he could have chosen to walk away, but he doesn't.

Chameli, like other sex-workers, is entangled almost inextricably with the mafia, and her dada Usmanbhai tries to force her to go with a powerful politician who she knows has a venereal disease. Bose is with her as she hides from the goondas, and later as she meets to negotiate with Usmanbhai. Her knight in a shining suit, he protects her from the pimp and pays off her debt.

But it isn't all that simple. The two of them get caught by the police during a shoot-out in the area, they're arrested and Bose is thrown behind bars. He is caught in a world that he doesn't understand or, to his despair, control. But for Chameli, it seems this is just another, if slightly more exciting, night.

The movie unravels many stark truths about the lives of sex-workers. They're the lowest on most any societal structure and are completely vulnerable to all the corrupt forces out there. But the film also highlights the awareness that now exists among this class, about their right to say no - one recurring background image is an AIDS message scrawled on a wall.

The film uses light beautifully, and the drama is accented the better for it. The music is also quite good, the rain-song in particular.

After a night of calling in of favours and negotiating with the police, Amit gets them out of the police station. And they part as morning breaks the next morning.

End of story? Get real, this is a Hindi movie. Of course they meet again. And while you knew all along that was going to happen, you're glad that it does.

ADVERTISEMENT
This page was tagged for
HINDE.SEX.COM
Chameli hindi movie
Chameli reviews
release date
Karreina Kapoor, Rahul Bose
Follow @fullhyderabad
Follow fullhyd.com on
About Hyderabad
The Hyderabad Community
Improve fullhyd.com
More
Our Other Local Guides
Our other sites
© Copyright 1999-2009 LRR Technologies (Hyderabad), Pvt Ltd. All rights reserved. fullhyd, fullhyderabad, Welcome To The Neighbourhood are trademarks of LRR Technologies (Hyderabad) Pvt Ltd. The textual, graphic, audio and audiovisual material in this site is protected by copyright law. You may not copy, distribute, or use this material except as necessary for your personal, non-commercial use. Any trademarks are the properties of their respective owners. More on Hyderabad, India. Jobs in Hyderabad.