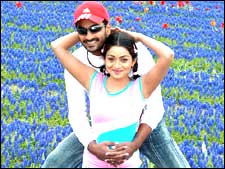 Mithun Verma / fullhyd.com
EDITOR RATING
5.0
Performances
Script
Music/Soundtrack
Visuals
NA
NA
NA
NA
Suggestions
Can watch again
NA
Good for kids
NA
Good for dates
NA
Wait for OTT
NA
Launching your daughter into the bad, bad world of the movies can be really difficult. Even when you're among the greatest comedians Telugu cinema has seen. That's why Bramhanandam has launched his son instead. And we're not sure if he's really happy with the outcome. At least, he'll be happy he hasn't invested his hard-earned dough into this turkey.

Turkey there meant the movie, not the hero (Gowtham). He's a wild goose - carefree, single, happy-go-lucky and definitely belonging in the water. It seems it becomes pretty expensive to make movies underwater, so they've gotten him to suit their needs. He's learnt most of the ways of the beings on land, except showing emotions. Can't have everything in life, can we?

With so much talent in the lead, it is only perfunctory that the movie entertains us to the hilt. The entertainment begins when our hero sees his dream girl on TV one day. Then on the road. Then in the college. Obviously, with all this coincidence, nature is begging the pair to fall in love. So are we. Anything to get that moony expression off them. But then, they get their other expressions on, and we're begging them to fall out of love.

Like any other respectable film, the movie ignores our pleas and continues to bombard us with the lead pair attack. She's a villager with a bellybutton piercing, and he's the city dude with a pierced bellybutton pinching disorder. And what a couple these two make!

The issue is this - she's joined that special college to learn the ways of modern girls, because she's already engaged to a guy who lives in the U S of A. Like the Big Apple would find it hard to accommodate a girl with piercings, short dresses and a bad accent.

Anyway, now it's time for the hero to sacrifice. All her friendliness was just friendliness it seems. Like how sad. Since he thinks that she doesn't love him, he reveals to her that his pinching and biting of her navel was just a friendly gesture by a friendly friend.

In the end, just before she's about to tie the knot with the NRI kid, she feels that the hero was a much better bet than this guy. He's definitely a better actor, anyway. Yuppie!

Though everything about the movie is pretty much inane, it's the sheer strength of the comedy that gets it out of the dumps. Venu Madhav, Sunil and the others (special mention to Shakeela) have managed to spread the cheese around well. And shockingly, Bramhanandam is the least funny of them all. Cut him some slack. Even I would not be at my best if my son's movie turned out to be like this.

There is that Raghavender Rao presence in the style of moviemaking here. And some really good humor. If you're game enough to venture into the hall just for these, be my guest.
Share. Save. Connect.
Tweet
PALLAKILO PELLIKUTHURU SNAPSHOT


Pros: the review
Cons: everything

ADVERTISEMENT
This page was tagged for
the real dream girl movie telugu
???????? ???????????? ?????? ?? ???????? ????
pallakilo pellikuthuru review
palakilopellikuthuru bgm download
Pallakilo Pellikuthuru Pallakilo Pellikuthuru Pallakilo Pellikuthuru
Follow @fullhyderabad
Follow fullhyd.com on
About Hyderabad
The Hyderabad Community
Improve fullhyd.com
More
Our Other Local Guides
Our other sites
© Copyright 1999-2009 LRR Technologies (Hyderabad), Pvt Ltd. All rights reserved. fullhyd, fullhyderabad, Welcome To The Neighbourhood are trademarks of LRR Technologies (Hyderabad) Pvt Ltd. The textual, graphic, audio and audiovisual material in this site is protected by copyright law. You may not copy, distribute, or use this material except as necessary for your personal, non-commercial use. Any trademarks are the properties of their respective owners. More on Hyderabad, India. Jobs in Hyderabad.