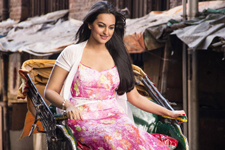 Ravi Kandala / fullhyd.com
EDITOR RATING
5.5
Performances
Script
Music/Soundtrack
Visuals
7.0
5.0
2.0
7.0
Suggestions
Can watch again
No
Good for kids
No
Good for dates
No
Wait for OTT
No
We often wonder what a perfect 10 movie would be like. It would probably have an outstanding story, a brilliant screenplay, perfect music with the songs being an integral part of the narrative and the background music adding just enough spice to the proceedings without being overwhelming, the editor doing a razor sharp job with not a minute of unnecessary footage, and every other technical department coming together and creating the perfect film.

Bullett Raja is nowhere there. If we started from 10, each of the four songs that are complete speed-breakers would easily lop a point off the rating, leaving it at a respectable 6. But then, there is the length of the movie and the sloppy editing that would knock off a couple more points, and a love track with Sonakshi Sinha (after whom the word "stereotype" was fashioned, surely) that would lop off another point, leaving us at 3.

We would then look at the contrived ending and take another point off, and give it 2, and then remember that we had to sit through all those songs and take away another point, leaving it at 1. However, 1 is not the rating that Bullett Raja gets, and we will tell you why once we get the plot out of the way.

Bullett Raja is the story of Raja Misra (Saif Ali Khan) and Rudra Tripathi (Jimmy Shergill), two young (okay, not so young) men who meet in strange circumstances and become thick friends. The two protect a local politician from an attack, and end up being hunted as a result. It does not take long for these cornered men to become hunters.

The duo quickly rises to being "political commandos", security men for politicians in the hinterland of Uttar Pradesh. How the very politicians who groomed them plot their downfall, and fail in the process, forms the rest of the movie.

Along the way, Raja also manages to fall in love with Mitali (Sonakshi Sinha), an aspiring actress (she's never seen aspiring for any work in the movie), and convince her Bengali parents that he is an assistant manager in a bank.

Now back to the rating. From the 1 point that we would otherwise have given it, superb casting (barring Sonakshi Sinha) adds a couple of points to the rating. Saif and Jimmy are in fine fettle, and manage to make us care for their friendship. Saif, who is a nawab through and through, does manage to get into the skin of his character, and takes us along for the ride. Jimmy Shergill reserves his best for some directors, and Tigmanshu is luckily one of them.

The rest of the cast members, including Raj Babbar, Chunkey Pandey, Vidyut Jamwal, Sharat Saxena and Gulshan Grover, are all perfect fits, and do well.

The intricately scripted political climate of Uttar Pradesh adds another point to the rating, taking it to 4. Tigmanshu Dhulia writes several wonderful applause-worthy dialogues, which easily add another point (back upto 5 now). The film's action sequences are raw, just like they are meant to be, and are superbly shot, as is the rest of the film; for this we give it another point, taking it to 6.

But then we look back at what could have been, and decide that 5.5 it is - and we've unlocked the mystery of how our rating system works. Go for Bullett Raja if you do not mind blazing guns for a couple of hours.
Share. Save. Connect.
Tweet
BULLET RAJA SNAPSHOT 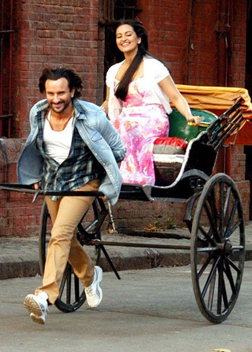 ADVERTISEMENT
This page was tagged for
The director of the not so great movie ‘Bullet Raja’
Bullet Raja hindi movie
Bullet Raja reviews
release date
Saif Ali Khan, Sonakshi Sinha
Follow @fullhyderabad
Follow fullhyd.com on
About Hyderabad
The Hyderabad Community
Improve fullhyd.com
More
Our Other Local Guides
Our other sites
© Copyright 1999-2009 LRR Technologies (Hyderabad), Pvt Ltd. All rights reserved. fullhyd, fullhyderabad, Welcome To The Neighbourhood are trademarks of LRR Technologies (Hyderabad) Pvt Ltd. The textual, graphic, audio and audiovisual material in this site is protected by copyright law. You may not copy, distribute, or use this material except as necessary for your personal, non-commercial use. Any trademarks are the properties of their respective owners. More on Hyderabad, India. Jobs in Hyderabad.