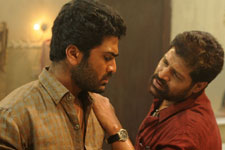 Deepa Garimella / fullhyd.com
EDITOR RATING
4.0
Performances
Script
Music/Soundtrack
Visuals
7.0
4.0
7.0
5.0
Suggestions
Can watch again
No
Good for kids
No
Good for dates
No
Wait for OTT
Yes
Srihari has been one of Telugu cinema's most underrated and underused actors. It is a pleasant surprise, then, to watch him play an important role in a film that does not have him walk around headless or defy science in a similar way.

Ko Ante Koti, an adventurous but severely faltering attempt at a no-frills thriller, is praiseworthy not only for showing us what else Sher Khan is capable of. It is also one of the signs that there are people in the industry who are comfortable not being in the mainstream. That the films of many of these people don't work is a different problem that can be fixed - hopefully, some day, they will get it right, if they hang around long enough.

Coated with the dirt of a city's underbelly, Ko Ante Koti is about a mega-heist planned by a hard-core ex-convict Maya (Srihari). The story is narrated by Sharwanand, who plays the lead, Vamsi, a cat burglar and master of high-altitude capers. Vamsi and two others are hired by Maya to rob a huge locker that has boatloads of someone's black money stashed away in it. Flitting in and out of slums, alleys and cheap brothels, the film tracks their journey towards the money.

Each of these accomplices has a small back-story that makes up the "ladies' sentiment" part, but obviously, Vamsi's is the most important. He was in love with a girl Satya (Priya Anand) from a village, and this love story seems to form a large part of the narrative.

What the movie gets right is the style of narration, and the tone. While in the city, the film feels suitably gritty and grimy. The characters, apart from looking delightfully dirty and unkempt, are carefully casual - there is no place for theatrics and melodrama. Street talk and expletives are thrown about, lending the film a "street" feel.

In the rural setting, too, emphasis has been clearly laid on keeping things authentic (except for Priya Anand, who is too urbane to play a village belle). None of the picturesque greenery of a filmi village here - this Hastinapuram is muddy, potholed and filled with people who are not very pretty.

However, "look and feel" do not a movie make, and Ko Ante Koti suffers from a haphazard plot. Many things happen in Ko Ante Koti that do not add up, or are necessary, or are even comprehensible. For example, the foursome goes and break into a palatial house to look for something vital in a locker. Who this house belongs to is not clear - is it "Finger Fredericks" or Venkat Rao? And then there is a cop (played by theatre artiste Vinay Varma) who keeps popping up and who seems to have some connection to the plot.

The suspense is built for a while as the robbery is elaborately set up, but it fizzles out fast. The heist lacks thrill when it is actually executed, and beyond a point, the story does not seem to be about the heist at all. There is plenty of violence in the end as well, that is not entirely justified.

You also do not know when Vamsi's story is in its flashback and when it is happening in the present. As for the characters, you start caring about them, but the film lets you down with the way it treats them and shapes them eventually. Some of them have nothing worthwhile to contribute either, like the old security guard.

Sharwanand is quite suited to a role like this one - the silent, brooding wry cynic who's grown up on the streets, spouting harsh life-truths and drawn to the bubbly heroine. Srihari serves as a great foil to his character. Priya Anand tries, but should have worked on her language, amongst other things. She doesn't look earthy enough to play a village girl.

The two actors who play Maya's accomplices are pretty good. Vinay Varma does make an impact, but his role could have been shaped much better, since it seemed to have been leading somewhere. Taagubothu Ramesh is brilliant, even in his rather silly role as a - what else? - drunkard.

The music is one of the few things Ko Ante Koti has going for it. The guitar riffs in the background do a good job of building up the thrill. The songs are very good, especially the one with Vamsi and Satya making ou... err... getting cozy. However, the visuals aren't of good quality - this is presumably an attempt to keep the texture gritty. 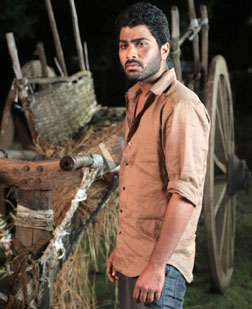 ADVERTISEMENT
This page was tagged for
Ko Ante Koti telugu movie
Ko Ante Koti reviews
release date
Sharwanand, Priya Anand
theatres list
Follow @fullhyderabad
Follow fullhyd.com on
About Hyderabad
The Hyderabad Community
Improve fullhyd.com
More
Our Other Local Guides
Our other sites
© Copyright 1999-2009 LRR Technologies (Hyderabad), Pvt Ltd. All rights reserved. fullhyd, fullhyderabad, Welcome To The Neighbourhood are trademarks of LRR Technologies (Hyderabad) Pvt Ltd. The textual, graphic, audio and audiovisual material in this site is protected by copyright law. You may not copy, distribute, or use this material except as necessary for your personal, non-commercial use. Any trademarks are the properties of their respective owners. More on Hyderabad, India. Jobs in Hyderabad.