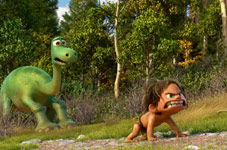 Kritika Deval / fullhyd.com
EDITOR RATING
7.0
Performances
Script
Music/Soundtrack
Visuals
8.0
5.5
8.0
9.5
Suggestions
Can watch again
Yes
Good for kids
Yes
Good for dates
Yes
Wait for OTT
No
If you are, like this reviewer, someone who prides themselves on not falling for emotional gimmicks, a Pixar film is generally the fall before which your pride goes. Every Pixar film since Toy Story 2 has been an experience fraught with furtive glances and stifled sobs (full-blown ones when watching in private, of course). It wouldn't do to let on that you have a soul when you've been doing your best to convince those around you that you're dead inside.

In fact, Pixar has become so good at playing viewers' emotions like a virtuoso that you really cannot blame yourself for breaking out the Kleenex. It's almost involuntary by this point - like, say, kicking when a doctor hits you on the knee or punching a friend in the face when they laugh at you for tearing up at a Pixar movie.

That's exactly why this writer was able to watch The Good Dinosaur in two very different frames of mind simultaneously - one filled to the brim with every kind of gooey, icky emotion in the world, and the other sighing with a cynical ennui you wouldn't expect a kiddie film. It's easy to detach yourself from anything and think rationally, if you're sufficiently accustomed to a situation.

The Good Dinosaur is a glorious looking film, of course - as if you'd expect any less by this point, Pixar being, after all, the cutting edge of animated cinema. The premise is that, 66 million years ago, an asteroid came hurtling towards the Earth, and did not hit it. Ergo, the K-T extinction event never happened. Ergo, the non-avian dinosaurs never died out. Ergo, some of the more intelligent species moved on from big and dangerous to creatures with what we like to call intelligence.

The only nod to this utterly fascinating idea before the film dissolves into something very familiar is the intro, and that we first meet the family of our protagonist Arlo (Raymond Ochoa) as some dinosaur species are apparently just beginning to figure out farming and animal husbandry, although they still don't wear clothes. Then, the movie forgets about the tantalising idea that drove sci-fi fans such as this writer to the cinemas while the characters just go Pixaring around.

Arlo is one of a family of 5 Apatosaurs, the runt of the litter. Where his brothers are big and strong and cunning, or even just capable of accomplishing one task from start to end, Arlo is a knobby-kneed little coward who jumps at shadows and is mortally afraid of the "chickens" he's supposed to be minding. His father tasks him with catching a "critter" that keeps stealing their harvest from their corn silo, so that Arlo can earn having his footprint mark on the silo like the rest of the family.

The critter, as it turns out, is a human boy. Humans are apparently still stuck at the hunter-gatherer stage of their development while the dinosaurs have moved on to the food grower stage, which makes sense, we suppose - after all, they were here first.

Anyway, disaster strikes - Arlo loses his father to a storm and himself to a water current. He's close to dying when he spots the little boy who was the pest he was supposed to experiment on (sure, another species starts to civilize and humanity turns into pests - checks out), and decides to call him Spot (Jack Bright). Spot befriends Arlo in the face of much hostility and gets him out of many a sticky, erm, Spot, while Arlo tries to make his way back home.

This film is a bit of The Lion King, a lot of Ice Age, and pretty much every Disney and Pixar movie that featured a coming-of-age tale involving journey of great peril that also symbolises the journey of the mind from childhood to adulthood, which, you will allow, is a lot of them. All through this, you will marvel at Pixar writers knowing just how to communicate with the joy-and-wonder filled 7-year-old within you. You will giggle when Arlo and Spot become besties over berries that get you high, and sniffle when they commiserate over each others' loss of family to natural disaster and migration, although they can't actually speak to one another.

You'll revel in the gorgeous colours, and the way they manage to make an animated landscape quite as rugged and ever-so-slightly imperfect as reality. It is, after all, the imperfections that bring renditions closer to reality. You'll even wonder at their ability to imbue characters so fugly that by rights only a mother should be able to love them, with a lovable quality so potent that you find yourself "daaw"-ing at them once every five minutes.

What you will not do is have your eyes opened by an innovative story. You won't find any answers if you want to know what a true dinosaur civilisation would be like, as opposed to one that is actually a human civilisation except that there are dinosaurs. You'll never know if humans will go from hunter-gatherers to scavengers and will plateau there because they'll be a food-growing species to leech off of.

For answers to these, you should probably pick up the Quintaglio Ascension trilogy, or, you know, wait for the inevitable sequel and see if Disney-Pixar actually do anything with the premise and the promise they set up with The Good Dinosaur, the awful teases that they are.
Share. Save. Connect.
Tweet
THE GOOD DINOSAUR (3D) SNAPSHOT 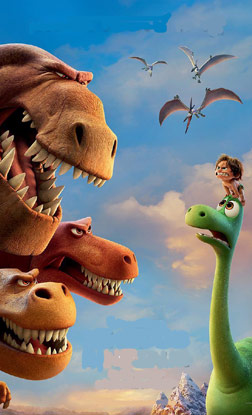 ADVERTISEMENT
This page was tagged for
The Good Dinosaur (3D) english movie
The Good Dinosaur (3D) reviews
release date
Raymond Ochoa, Jack Bright
theatres list
Follow @fullhyderabad
Follow fullhyd.com on
About Hyderabad
The Hyderabad Community
Improve fullhyd.com
More
Our Other Local Guides
Our other sites
© Copyright 1999-2009 LRR Technologies (Hyderabad), Pvt Ltd. All rights reserved. fullhyd, fullhyderabad, Welcome To The Neighbourhood are trademarks of LRR Technologies (Hyderabad) Pvt Ltd. The textual, graphic, audio and audiovisual material in this site is protected by copyright law. You may not copy, distribute, or use this material except as necessary for your personal, non-commercial use. Any trademarks are the properties of their respective owners. More on Hyderabad, India. Jobs in Hyderabad.