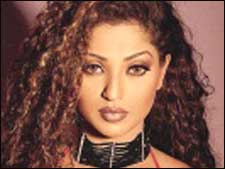 Arshia Anwer / fullhyd.com
EDITOR RATING
3.0
Performances
Script
Music/Soundtrack
Visuals
NA
NA
NA
NA
Suggestions
Can watch again
NA
Good for kids
NA
Good for dates
NA
Wait to rent it
NA
It is said that given enough time and enough monkeys, one could eventually produce Hamlet by accident. It is our firm belief that one monkey, in one day, could produce the entire script of Ishq Qayamat. In one hour if it's on grass.

The movie starts with Suman (Suman Ranganathan) leaving her husband Ravi (Milind Gunaji) to go to a college reunion. While Ravi is returning after leaving his wife there, he meets Shweta (Kashmira Shah), who coincidentally appears just in time to help him out with his flat tyre. This meeting is supposed to be indelibly etched into your mind as it is integral to the plot, so that is why they dye Kashmira Shah's hair a bright shade of flaming red.

As fate would have it, Suman meets old flickering flame Ajay (introducing Deepak Jethi) at the reunion. And Ajay, on his part, immediately starts burning more brightly by singing romantic songs and dancing in slow motion. Personally I don't know what's so great about Ajay, but Suman finds him so appealing that she falls in bed with him instantly. The next morning she regrets it, goes back to her husband to revel in matrimonial bliss, and vows to forget Ajay.

But that is not to be because they meet again. The lust-crazed couple cannot resist each other. Again. But this time their 'innocent' extra-marital romp in the covers has a little twist - because as soon as Suman comes home after the tryst, the phone rings.

Suman is being blackmailed. And the blackmailer is Shweta (of the red hair fame). Shweta claims to have pictures of Ajay and Suman together, and asks for a ransom amount in exchange for the photographs. She gets it. But this is not the end.

Suman decides never to meet Ajay again, but as fate would have it, she gets lured to him; they do what they've been doing all over, and when Suman gets back home... the phone rings.

Blackmailed, again. By Shweta, again. Fast forward through photographs, ransom etc., but this time Suman tells Ajay about the blackmailing, and he gallantly offers to go instead of her to pay the money. The next morning, Suman watches Ajay's and Shweta's bodies being fished out from a lake. And then... yes, the phone rings. And rings. And rings all through the second half.

That is Suman getting blank calls from Ajay. But Ajay's dead. And Suman is perplexed. And Ravi (the husband, remember?) is worried. The movie now makes a dumb attempt at mystery, and an unpredictable end would have only helped. Heck, not making the movie at all would have helped.

The movie is famous only for the scenes aspiring to be hot and sexy, but whenever I saw Deepak Jethi doing his lust-crazed act, my brain short-circuited and I was reminded poignantly of a rodent rooting for... whatever it is that rodents root for on National Geographic. Suman Ranganathan looks okay in some parts, speaks like a South-Indian, and cannot do the scared bit convincingly. Milind Gunaji is at his tight-lipped best. Kashmira Shah... I'd rather not talk about her.

On the whole, you'd love to meet the makers of Ishq Qayamat and make them feel very sorry for being born. And if anyone even hints about the fact that I went and watched this movie, I'm going to deny it to death. So help me God.
Share. Save. Connect.
Tweet
ISHQ QAYAMAT SNAPSHOT

ADVERTISEMENT
This page was tagged for
ishq qayamat movie online watch
ishq qayamat full movie download
Ishq Qayamat
ishq qayamat movie download
ishq qayamat movie online
Follow @fullhyderabad
Follow fullhyd.com on
About Hyderabad
The Hyderabad Community
Improve fullhyd.com
More
Our Other Local Guides
Our other sites
© Copyright 1999-2009 LRR Technologies (Hyderabad), Pvt Ltd. All rights reserved. fullhyd, fullhyderabad, Welcome To The Neighbourhood are trademarks of LRR Technologies (Hyderabad) Pvt Ltd. The textual, graphic, audio and audiovisual material in this site is protected by copyright law. You may not copy, distribute, or use this material except as necessary for your personal, non-commercial use. Any trademarks are the properties of their respective owners. More on Hyderabad, India. Jobs in Hyderabad.