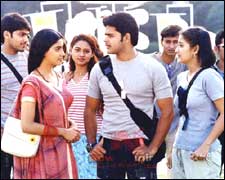 Priyanka Pulla / fullhyd.com
EDITOR RATING
6.0
Performances
Script
Music/Soundtrack
Visuals
NA
NA
NA
NA
Suggestions
Can watch again
NA
Good for kids
NA
Good for dates
NA
Wait to rent it
NA
It’s been quite a while since we got to see a totally teen-hormone driven film like Preminchi Choodu. It is quite reminiscent, to go back really far in time, of Prema Desam, the massive Vineet-Abbas-Tabu starrer. Hardly any plot, but plenty of college lore – festivals, tearful farewells, girl-watching, cross-connections in love, and wholesome lessons learnt from them.

Shaam (Shaam) and Iman (Arya) are 2 young cowlick-sporting, unshaven boys belonging to a miscellaneous, high-end, designer college with a swish and spanking new building. Priya (Asin), Irene (Laila) and Pooja (Pooja) are three pretty girls who hold their books to their chest as they come to college everyday and have peculiar quirks that are very clearly delineated.

Priya is the girl who ‘thinks with her head’, rather than heart, Irene is the affectionate one from a breaking family, and Pooja is the rambunctious girl in shorts who hasn’t outgrown her ADHD yet and wears people down with her ear-popping buoyancy.

Now, simply put - and simple is what the story is, anyway – Shaam loves Priya but Priya doesn’t love him back. Ditto Pooja and Shaam. That is, Shaam, Priya and Pooja are a love triangle. Then Iman and Irene love each other, but Irene dumps Iman when she finds out he isn’t concentrating on cricket, the passion of his life, and his career hope and dream, because he is distracted by her.

Then, of course, good times turn sour, hope rises eternal from across the horizon, and bad times give way again to mellow memories of the good. Teenagers grow up, responsibilities are realized, puppy love is sacrificed, and mature love grows in its place like a permanent tooth growing off the stump of a deciduous one.

Psychologists would delight at how hale and salubrious the growth is, and how in keeping this film is with texts expatiating on the process of the growth and maturity of a well-adapted member of the society.

Like we said, there is a farewell function where Shaam gives a melodramatic speech about all that everyone has learnt in college life, and everyone cries about how they will miss each other. They attend each other’s weddings with not a trace of causticity, even though it might be their own calf-love now mooing with someone else on the altar.

And they make pithy statements about sacrifices made for good purpose that would go down in books as eternal nuggets of wisdom. For e. g., the one when Irene, having ‘given up’ on Iman, utters while witnessing him marrying another girl and being greeted by Ravi Shastri – “If I had said yes to him, he would not be so famous today.” Ahem.

The strengths of the movie are, of course, the young look, the zest and the energy. The boys are both drop dead gorgeous in a very teenage, college boy kind of a way. The ladies are rather de-glamorized, but arresting to look at nevertheless. Asin, especially, sports a big bindi and pimply look. She acts well as the no-nonsense, sometimes uptight, over-mature college girl.

Laila is adequate as the demure, somewhat waxen beaut who doesn’t think much of dumping Iman when he acts irresponsibly. And Pooja is probably the most giggle-inspiring of all, with her bottom-shorts and pigtail act, as she keeps throwing herself with abandon on Shaam who consequently treats her a little worse than a doormat.

Shaam is probably the best discovery of all, and it would be a treat to watch him in more films. He emotes well, but more importantly, and what really matters is this, he looks pretty darn good.

The music by Harris Jairaj is average; it never quite steals the show anywhere. Preminchi Choodu might not really make it big with the Telugu audience because it is a dub and hardly got its fair share of publicity, but if you are reading this, allow us to tell you that it makes for fair competition to practically every other Telugu flick running right now.

It’s refreshingly free of sweaty, gory fights and ugly villains. Instead it’s eye-candy all the way, from beginning to end. Now that’s what the best Telugu films always are, so this definitely calls for a closer look.
Share. Save. Connect.
Tweet
PREMINCHI CHOODU SNAPSHOT

ADVERTISEMENT
This page was tagged for
Preminchi Choodu telugu movie
Preminchi Choodu reviews
release date
Shaam, Asin
theatres list
Follow @fullhyderabad
Follow fullhyd.com on
About Hyderabad
The Hyderabad Community
Improve fullhyd.com
More
Our Other Local Guides
Our other sites
© Copyright 1999-2009 LRR Technologies (Hyderabad), Pvt Ltd. All rights reserved. fullhyd, fullhyderabad, Welcome To The Neighbourhood are trademarks of LRR Technologies (Hyderabad) Pvt Ltd. The textual, graphic, audio and audiovisual material in this site is protected by copyright law. You may not copy, distribute, or use this material except as necessary for your personal, non-commercial use. Any trademarks are the properties of their respective owners. More on Hyderabad, India. Jobs in Hyderabad.