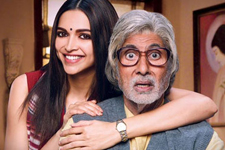 Zehra Abbas / fullhyd.com
EDITOR RATING
7.5
Performances
Script
Music/Soundtrack
Visuals
8.5
7.5
7.0
7.5
Suggestions
Can watch again
Yes
Good for kids
Yes
Good for dates
Yes
Wait for OTT
No
Shoojit Sircar obviously believes in the old adage that the way to a man's heart is through his stomach. The catch is that Sircar's interpretation of the adage is not gastronomical but scatological. Kudos to this brave man for a film that uses the alimentary canal to reach the viewer's heart.

The movie opens in the Banerjee bungalow tucked away in Chittranjan Park in Delhi, where we meet Piku (Deepika Padukone), a talented, beautiful, young architect whose seemingly perfect blueprint for life is being used as toilet paper by her 70-year-old, hypochondriac father, Bhaskor Banerjee (Amitabh Bachchan).

Bhaskor is a crotchety, old widower who is hilariously obsessed with his bowel movements. Bhaskor doesn't just take a dump - he approaches the loo like the poet approaches a blank page; agonizing over the quality, quantity, colours and regularity of his output. This mental block arises from a fixed belief that constipation will eventually claim his life.

The rest of his energies are devoted to blocking Piku's chances at finding love because he doesn't want her to leave him since, as he assertively declares, "Now I am your child." A child who calls her up at a dinner date to inform her that his latest excrement resembled mango pulp (Maaza sales are set to go down the toilet with that). Other unique obstructions to Piku's love life include telling prospective suitors that she isn't a virgin, and telling her that marriage without purpose is a "low IQ" act.

Naturally, Bhaskor's neediness and stunts for attention have made Piku an angry and frustrated woman. Imagine living with a person who strides out of the toilet and announces, "Not a single piece has come out." Defecation be damned, Piku dumps all euphemisms when it comes to that topic, and at one point even yells, "I'm not discussing your shit!"

Enter Rana Chaudhry (Irrfan), a taxi company owner who ends up driving Piku and Bhaskor to Kolkata due to a turn of events. Rana now experiences first hand why his drivers wanted to drive away from Piku rather than drive her around. At first, he's bewildered, not just by Bhaskor's 18th century wooden commode that is strapped onto the car carrier, but also because he is jammed between two strongly opinionated and stubborn Banerjees. He realizes that he is in a crappy position (no pun intended), and handles it by teaching Bhaskor the correct posture for a perfect motion (with a diagram and a squatting demonstration) and charms Piku by standing up to her cantankerous old man.

The road trip culminates with a touching resolution, not to Piku's and Rana's growing interest in each other, but to Piku's and Bhaskor's strained relationship. This choice imbues the climax of the film with a powerful impact.

Shoojit Sircar extracts brilliant performances from all three lead actors. Amitabh Bachchan and Irrfan are in a league of their own, but Deepika Padukone holds her own magnificently against these stalwarts. She's a gutsy actor, and is unafraid to appear sans make-up, to cover up her figure, or to act screechy and unpleasant. She proves herself a capable and worthy choice for the role of the complex titular protagonist, who is essentially a regular girl, warts and all.

Irrfan's performance is so effortless that you wonder how much effort actually went into making it look so natural. He doesn't falter for a second, and presents an endearing and self-assured counterpoint to the bullish Bannerjees. The restraint and subtlety with which he and Padukone convey the chemistry between their characters is sheer poetry.

Amitabh Bachchan portrays an annoying and inherently selfish man, but the actor makes him human and endearing. The Bengali accent is a bit iffy in places, but his performance has heart - watch out for the comic timing, the body language and that legendary ability to make you swing from bathos to pathos. A stand-out scene shows Bhaskor sneaking out of the house on a bicycle, taking in the sights of his beloved Kolkata with eyes magnified by thick spectacles, limbs at awkward geriatric angles, and mouth hanging open with childish joy.

The production team has convincingly created an appropriate world, very Bengali in its milieu. Pictures of Tagore, stacks of books, wooden boxes of homoeopathic pills and the omnipresent Kayam Churan create a charming picture for this story. The music from Anupam Roy, who makes his Bollywood debut with the film, is a welcome change from the regular Bollywood fare, and the track Bezubaan stands out.

Director Shoojit Sircar and writer Juhi Chaturvedi are a great team and they succeed in creating a charming take on the parent-child relationship, while also touching upon themes like old age and its impact on family, loneliness, modern day courtship and changing sexual mores, and the importance of roots. The writing focuses heavily on witty banter that sparkles in places but also lags in others. Also, the pace of the film does get a bit tiresome and would have benefitted from tighter writing. If you're looking for the raw humour and drama of Vicky Donor you will be disappointed because while Piku is from the same stable, it's a different animal. Watch the film for its performances and its uniqueness.

As a tribute to the film's originality, we can proclaim Piku a shitty film - secure in the knowledge that everyone knows it's a compliment.
Share. Save. Connect.
Tweet
PIKU SNAPSHOT 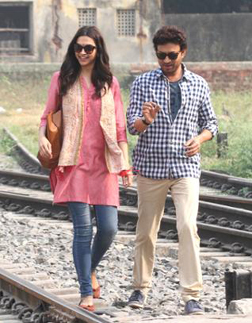 There's a certain quality to your writing which makes it very interesting, but only in snatches.

It would help to not approach the review as an opinion checklist of various departments of the movie. Further, one can argue that it isn't the reviewer's duty to narrate the context of the movie to the reader.

It'd be great if you could just write about what aspects affected you and make the whole piece have a flow to it.

ADVERTISEMENT
This page was tagged for
Piku hindi movie
Piku reviews
release date
Amitabh Bachchan, Deepika Padukone
theatres list
Follow @fullhyderabad
Follow fullhyd.com on
About Hyderabad
The Hyderabad Community
Improve fullhyd.com
More
Our Other Local Guides
Our other sites
© Copyright 1999-2009 LRR Technologies (Hyderabad), Pvt Ltd. All rights reserved. fullhyd, fullhyderabad, Welcome To The Neighbourhood are trademarks of LRR Technologies (Hyderabad) Pvt Ltd. The textual, graphic, audio and audiovisual material in this site is protected by copyright law. You may not copy, distribute, or use this material except as necessary for your personal, non-commercial use. Any trademarks are the properties of their respective owners. More on Hyderabad, India. Jobs in Hyderabad.